The Fed rate decision is less than 24 hours away and the S&P 500 ended Tuesday little changed after failing to push higher at the beginning of the trading session. It sits just above 2018 lows and a hawkish tone out of the central bank tomorrow may very well cause it to set new ones. Markets have become increasingly doubtful of even one hike next year, leaving the door to three hikes in 2019 may cause intense volatility.

Looking at currencies, the pro-risk New Zealand Dollar largely outperformed against its major counterparts. It was bolstered by domestic business activity data, then adding to gains as European equities rose into their peaks before turning back down into the red by the end of the day. This also allowed the anti-risk Japanese Yen to aim cautiously higher, focusing more on when stocks declined as opposed to rising.

Meanwhile the Canadian Dollar largely underperformed again, sinking with a 6.65% decline in crude oil prices. Markets seem to be becoming increasingly doubtful that OPEC cuts could balance the commodity. Earlier this week, the EIA reported that US crude output would rise by 134k b/d in January. This also coincided with a report from Genscape about rising inventories in a major US storage hub.

The US Dollar traded mixed which is understandable given that the Fed is just around the corner. Similar to yesterday, the greenback was unable to benefit from rising safe haven demand today as 2019 Fed rate hike bets dwindled. The Euro headed little higher towards the end of today’s session following reports that Italy reached an accord with the EU on a budget.

Join Analyst Dimitri Zabelin as he hosts a webinar later today covering the outlook for the Euro in 2019 beginning at 4:00 GMT!

Wednesday’s Asia Pacific trading session is rather quiet in terms of economic data, placing the focus for FX on risk trends. S&P 500 futures are little changed, indicating mixed performance to come. This may be the case as investors await today’s FOMC monetary policy announcement. From a technical perspective though, the Australian Dollar remains vulnerable against certain majors heading into the final moments of 2019.

Crude oil prices have extended their dominant downtrend from September after consolidating over the past couple of weeks. The commodity sits right above the August 2017 lows around 45.62. While this is a bearish signal, do note that presence of positive RSI divergence which shows fading downside momentum. At times this may precede a turn higher. Otherwise, a close under support exposes the June 2017 lows next at 42.08. 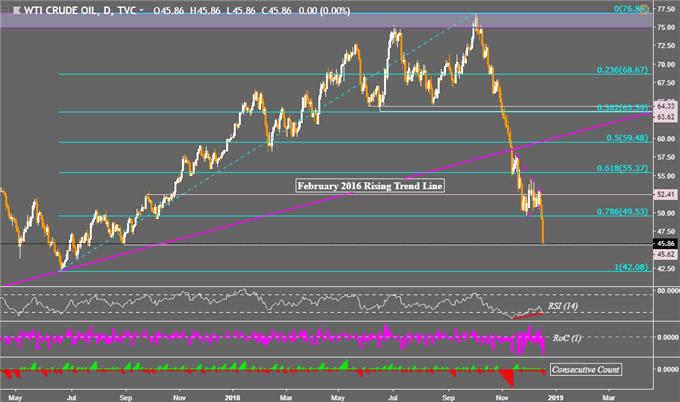