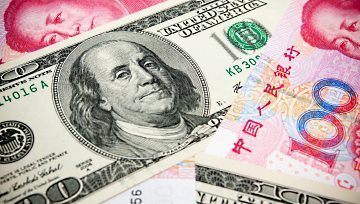 In the second trading session after this weekend’s G20 Leaders’ Summit, the event that resulted in intense risk appetite at this week’s market open, optimism quickly fell apart. After US President Donald Trump said that China agreed to reduce and remove tariffs on US auto imports, economic adviser Larry Kudlow downplayed that notion. Conflicting signals from the White House sunk stocks and boosted safe havens.

The S&P 500 suffered its worst drop in almost two months, shedding about 3.24% from its price. Before the US trading session, the Nikkei 225 fell 2.39% while the Euro Stoxx 50 declined roughly 0.8%. US government bond prices rose as demand flowed into the global risk-free asset. If that was not enough, there was also an inversion in the yield curve on certain maturities for the first time in more than a decade (see below).

Spread Between US 3-Year and 5-Year Government Bond Yields 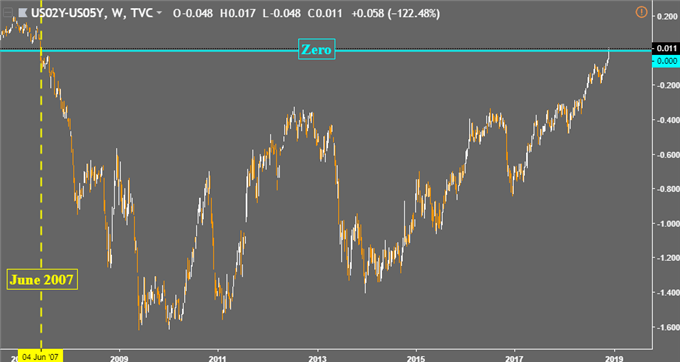 Given this trading dynamic, it was not too surprising to see the anti-risk Japanese Yen overtake its major counterparts. The US Dollar, which often benefits during aggressive risk aversion thanks to its reserve status, ended relatively flat. While the greenback had a comeback during the second half of Tuesday’s session, it only trimmed some losses from the Asia session when fears increased about US yield curve inversion.

Meanwhile the British Pound also finished relatively flat. During the first half of Tuesday, it rallied following the ECJ stating that the UK could revoke Article 50 unilaterally. But then gains fell apart after UK Prime Minister Theresa May and her government was found in contempt of Parliament. Crude oil prices gave up some of yesterday’s gains after Saudi Arabia’s Oil Minister said it is premature to say if OPEC+ will cut output in the year ahead.

With that in mind, all eyes turn to Asia Pacific benchmark indexes which are at risk to echoing weakness on US China trade war relief bets. This could extend gains in the Japanese Yen while weighing against the pro-risk Australian Dollar which is undermined by negative RSI divergence. After yesterday’s status quo RBA rate decision, the currency may focus on risk trends instead of monetary policy bets.

Analyst David Cottle will be covering the Australia GDP webinarlive beginning at 00:15 GMT, join for an overview of the Australian Dollar!

The largest drop in the S&P 500 since early October resulted in a false breakout above the descending trend line from the same month. The range of resistance between 2,801 and 2,789 kept prices at bay and we are now sitting just above support at 2,691. Clearing 2,676 (lower range of support) exposes the October lows thereafter. 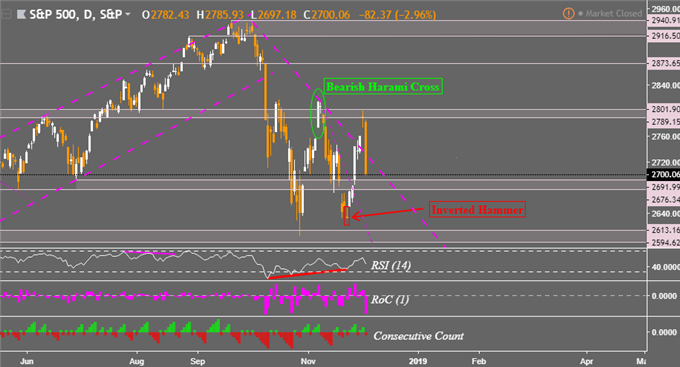 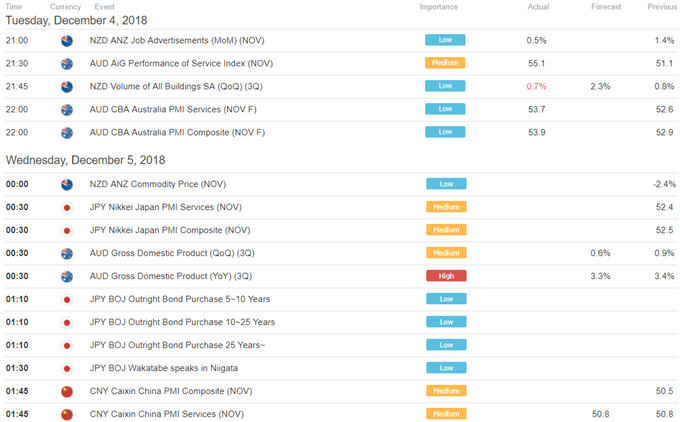