S&P 500 Gains in Vain after Powell Speech? USD Still in a Uptrend

The S&P 500 climbed about 2.3 percent, clocking in its best performance in a single day in eight months. Meanwhile the US Dollar depreciated across the board as local front-end government bond yields tumbled. Gold prices, the traditional anti fiat asset, rallied. The culprit? Look no further than the Chair of the Federal Reserve, Jerome Powell.

Mr. Powell spoke at the Economic Club of New York on Wednesday and said that there is no preset policy path, adding that rates are ‘just below’ the neutral range. The markets interpreted his comments as relatively dovish. In fact, looking at Fed funds futures, expectations are now looking at less than two hikes in 2019 and these estimates have been weakening in recent weeks.

There is however one problem, the Fed's own economic projections call for an additional hike this year as well as three in the following. Barring a cataclysmic event that could disrupt their outlook, the markets will eventually have to realign with reality. As such, the US Dollar may reverse its course as well as the S&P 500 in the medium term. DXY still has support to breach before a turn lower.

Just before Powell’s speech was live, the Bank of England released their estimates of the economic impact of a disorderly Brexit. The central bank said that such an outcome could result in an 8% drop to GDP while the British Pound could depreciate as much as 25 percent. To put that into perspective, GBP/USD dropped about 8.9 percent on the day of the Brexit Referendum back in June 2016.

Due to the timing of the BoE report, weakness in USD on Jerome Powell’s speech got the most attention. As such, GBP benefited regardless. Looking ahead towards Thursday’s Asia Pacific trading session, we may see local benchmark indexes follow Wall Street higher. As such, the pro-risk Australian and New Zealand Dollars may gain while the anti-risk Japanese Yen falls.

The Australian Dollar does have local third quarter private capital expenditure data to look forward to. Data out of the country has been tending to outperform relative to economists’ expectations. As such, an upside surprise may offer a near-term boost to AUD. Though do keep in mind that the data may do little to alter RBA rate hike bets given their patient stance. But, it would not hurt in a ‘risk on’ trading environment.

As anticipated, the inverted hammer in the S&P 500 pointed out a couple of days back ended up preceding a turn higher. A near-term falling trend line from earlier this month was breached as well and it may very well be a bullish signal. However, a new falling trend line from October has formed on the chart below. As such, resistance may hold and that could be it for a temporary burst in gains. Otherwise, a push above it may see the index reverse its dominant downtrend from last month. 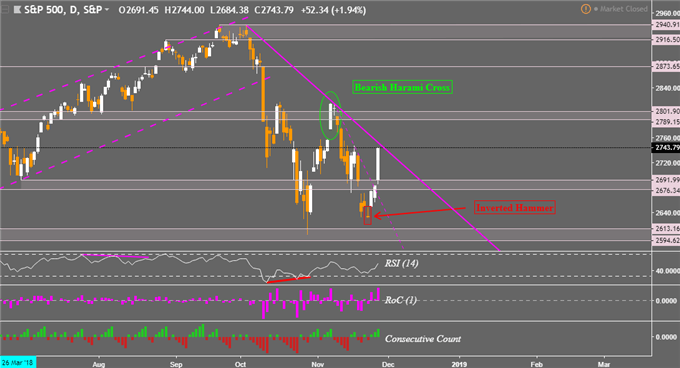 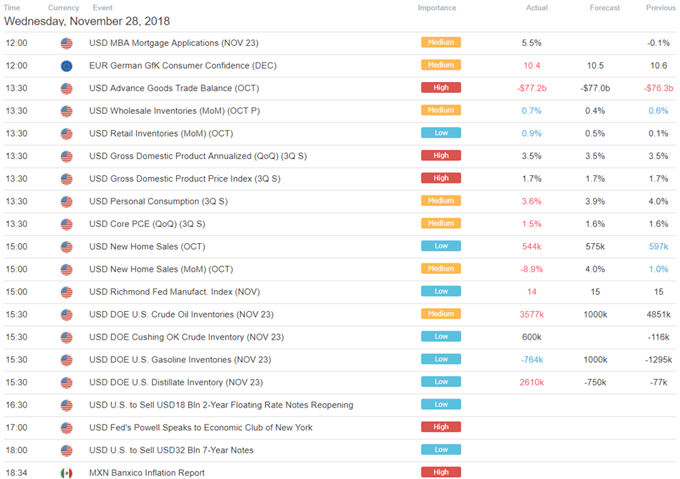