As financial markets inched closer to the Thanksgiving Day holiday in the US and illiquidity slowly set in, Tuesday’s trading session was nothing short of quiet. Crude oil prices tumbled about seven percent which was the worst performance in a day since February 2016. The commodity wiped out all of the progress it made to the upside in recent sessions as it closed at its lowest in over a year.

Some of the declines in crude oil may be attributed to OPEC supply cut doubts. But, a little over an hour before the drop in the commodity accelerated, a report from S&P Global Platts crossed the wires noting that Chinese oil inventories rose 416.7% in October. Furthermore, sentiment-sensitive oil prices were weighed down by another rout in global benchmark stock indexes as anticipated.

The S&P 500 gapped about 1.34% to the downside on Tuesday, and continued trading lower in the aftermath of a bearish reversal candlestick pattern pointed out earlier this month. This followed weakness in Asia and European equities. An APEC meeting from earlier this week, which ended without a US-China agreement, overshadows the former.

Generally speaking, this hasn’t been a great week for those seeking higher returns. Yesterday, disappointing US home builder sentiment sent Wall Street lower as the US Dollar fell. Today however, the greenback gained and so too did US government bond yields. This suggests that Fed rate hike bets were revived after being suppressed yesterday. Indeed, Fed funds futures now indicate a higher probability of an increase in December.

Meanwhile, the pro-risk Australian and New Zealand Dollars declined as stocks tumbled. There may be room for more weakness ahead, especially if the Nikkei 225 follows the S&P 500 lower. This is underpinned by a report from the USTR that the United States accused China of continuing intellectual property and tech theft. This further risks weighing down equities ahead which may further bolster the Japanese Yen.

Crude oil prices fell through the 61.8% Fibonacci retracement at 55.37, signaling that the commodity may be resuming its dominant downtrend since October. At this point, rising trend lines from 2017 and 2016 have been taken out. But, there may be a temporary correction ahead again. Positive RSI divergence warns that downside momentum is fading. A close above 57.36 may precede a lasting turn higher. 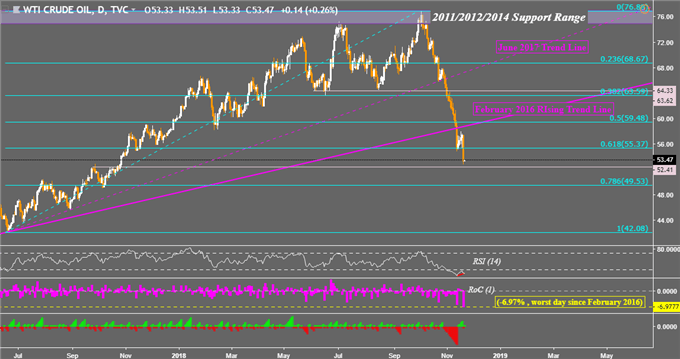