The US Dollar traded lower on Friday, bringing its weekly performance to the worst it has seen since the middle of September. Fed Vice Chairman Richard Clarida amplified the selloff as he noted that the central bank ‘has to factor in the global outlook’ going forward. His commentary echoed on notes from Fed Chair Jerome Powell who earlier this week said that slower growth abroad is a headwind.

For evidence of that, look no further than China where in the third quarter, its economy grew at its slowest since 2009. Weakness in the greenback was accompanied with a deterioration in the implied Fed rate outlook priced in by futures. Now, the markets are envisioning less than two hikes next year which is below the central bank’s outlook of perhaps three in 2019.

Not surprisingly, Wall Street cheered prospects of slowing rate hikes as the S&P 500 and Dow Jones finished the day about 0.22% and 0.49% higher. Meanwhile US government bond yields declined. The Euro, Australian and New Zealand Dollars were quick to take advantage of weakness in the greenback. The latter were particularly boosted as the pro-risk AUD and NZD also benefited from a boost in stock prices.

Later in the day, an announcement from US President Donald Trump that further Chinese tariffs might be off the table boosted the Dow. But, gains were pared when White House officials offered information to the contrary. Meanwhile the British Pound ended the day cautiously lower against most of its peers. Threats of UK Prime Minister Theresa May being ousted along with her Brexit draft undermine Sterling.

With that in mind, we may see Asia Pacific benchmark stock indexes begin this week on a high note. Regional bourses will be able to absorb the weakening implied Fed rate path, offering a boost to the Nikkei 225. This may also pressure the anti-risk Japanese Yen lower. The British Pound meanwhile can be quite volatile depending on weekend headlines out of the Palace of Westminster or Brexit headlines.

While the US Dollar has been making progress to the downside as of late, the dominant uptrend is still intact. That is being held together by a rising trend line from September. Negative RSI divergence preceded the recent decline in DXY but more weakness is needed to confirm a longer lasting bearish reversal. With that in mind, immediate support is a horizontal range between 96.16 and 96.05 which is also closely aligned with the rising trend line. A descent through it exposes 95.55. 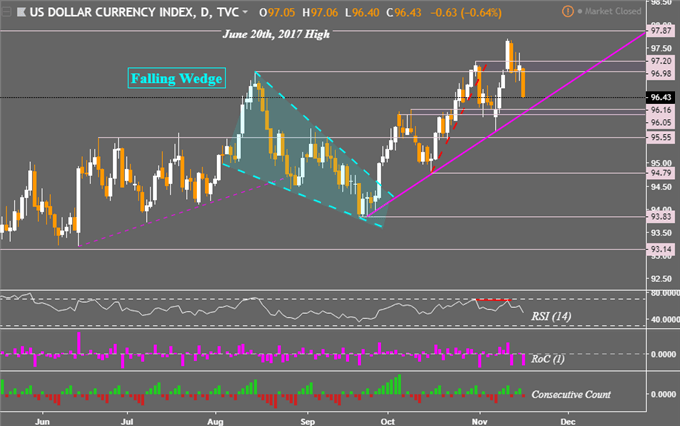 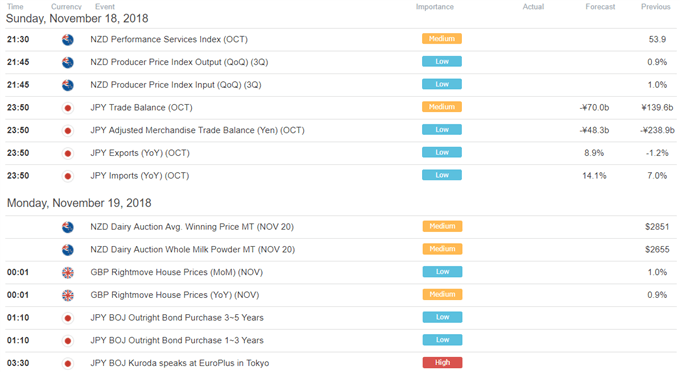