After failing to make headway on UK Prime Minister Theresa May and her Brexit draft yesterday, the British Pound depreciated against its major counterparts by the most since the Brexit Referendum itself. Looking at an equally weighted Sterling basket below, it dropped about 1.85 percent which was the largest decline since June 2016. 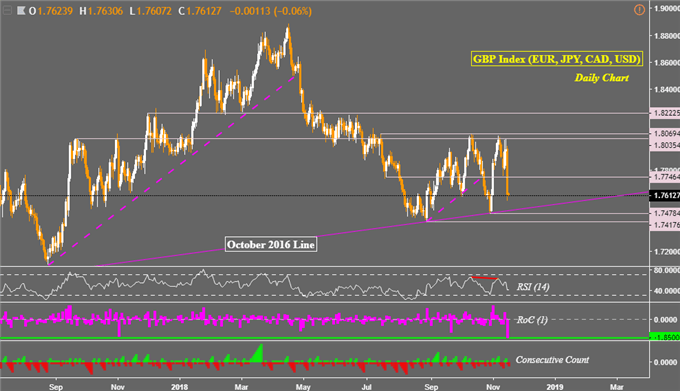 Within 24 hours of her address outside of 10 Downing Street, various cabinet ministers resigned such as Brexit Secretary Dominic Raab. This stoked numerous uncertainties such as the Brexit draft not being able to be passed through parliament, Theresa May facing a no confidence vote and has increased the odds of a hard Brexit. UK front-end government bond yields tumbled, signaling fading BoE rate hike bets.

The US Dollar was quick to capitalize on the weakness in Sterling, but was left ultimately mixed against its other major counterparts. Despite the worrying news out of the UK, the pro-risk Australian and New Zealand Dollars outperformed. This was largely as a result of a recovery on Wall Street which led the S&P 500 up 1.06% as it halted a 5-day losing streak.

The upbeat mood in stocks from the US trading session seemed to be as a result of reduced US China trade war fears ahead of the G20 summit. The anti-risk Japanese Yen headed cautiously lower. However, the risk-on trading dynamic was capped after US Commerce Secretary Wilbur Ross said that they still intend on planning to increase Chinese import tariffs from 10% to 25% come 2019.

With that in mind, a rally in Asia Pacific benchmark stock indexes Friday seems less likely given the reality that higher US tariffs are still on the table for China. This also allows for equities such as the Nikkei 225 to digest the rather worrying developments out of the UK. As a result, we may see the Japanese Yen gain ground while AUD and NZD take a step back from recent gains.

The Australian Dollar is once again making an attempt to overturn its dominant downtrend from February. So far, it seems rather unconvincing. The pair remains restrained by former support now resistance at 0.73106 (July lows). Combine that with the earlier high in November at 0.73 makes for a stiff resistance barrier. Adding on top of that is the presence of negative RSI divergence which shows fading upside momentum. As such, we may see its next move as a turn lower towards a rising support line from October. 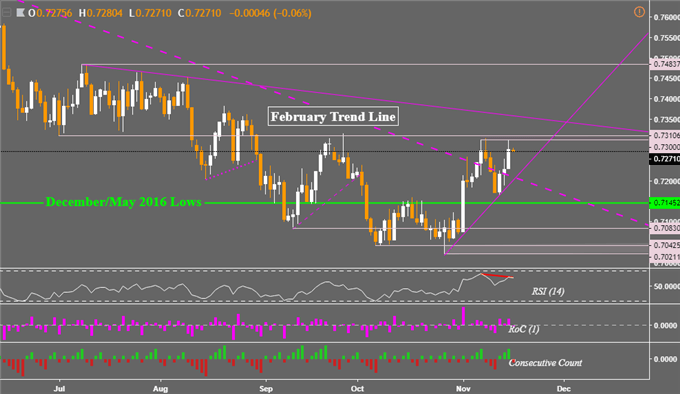 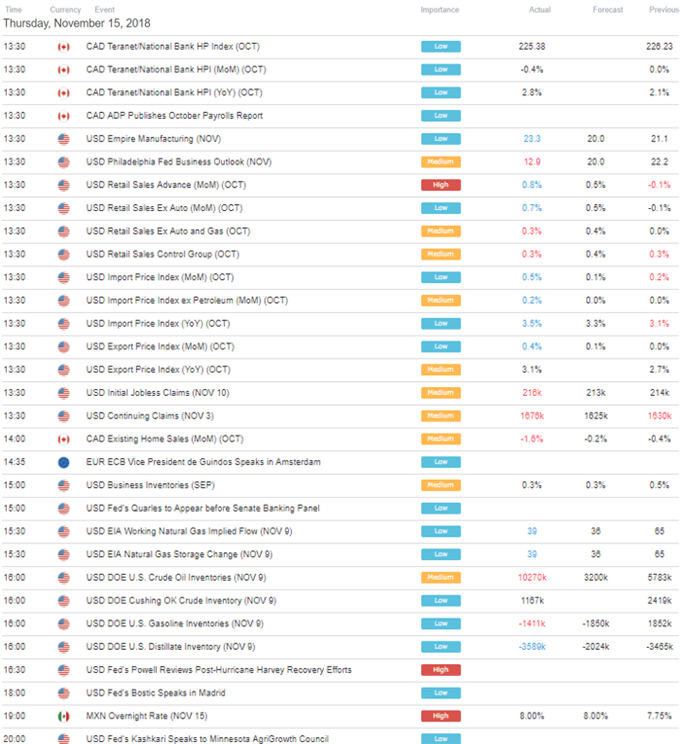