Market optimism from Tuesday’s Asia Pacific trading session failed to transpire into more meaningful progress on Wall Street. In what began as a cooldown in US China trade war fears, it ended in pessimism as Crude Oil plunged by the most since February 2016. The commodity entered its 12th consecutive day of losses as OPEC warned that it sees demand for its stockpiles easing for the road ahead.

As crude oil continued to build on its worst consecutive losing streak since at least 1984, the Canadian Dollar followed the commodity lower. At times, the Loonie often moves in positive correlation with oil given that it is a key source of revenue for Canada. But, CAD still managed to gain ground against the greenback by the end of the day.

This is mainly thanks to losses in the US Dollar during the APAC session and late Wall Street trade. In the former, demand for safe havens waned and the anti-risk Japanese yen suffered. During the latter, reports that UK Prime Minister Theresa May and her Brexit draft could be approved sent the British Pound rallying. Broad gains in Sterling weighed down on the greenback.

As we look to Wednesday’s Asia Pacific trading session, S&P 500 futures are pointing notably higher perhaps due to Brexit optimism. This could translate into regional stock market exchanges rising for the day. Such an outcome would bode ill for the Japanese Yen while bolstering the pro-risk Australian and New Zealand Dollars.

Speaking of, the Aussie Dollar awaits local wage price data followed by key economic growth statistics from China. That includes retail sales and industrial production data and I will be covering said events as well as the Aussie Dollar reaction live beginning at 1:45 am GMT on Wednesday. While this data may have limited implication for RBA monetary policy bets, it would be more meaningful for global growth speculation. Especially with China’s economy moving along at its slowest since 2009.

Meanwhile, crude oil prices could continue adding momentum to its downtrend should US CPI data inspire Fed rate hike bets over the next 24 hours. The Euro was also rather quiet after Italy’s government stuck to a 2.4% budget deficit. But there may be more risks ahead for EUR/USD from Sweden. Our Analyst Dimitri Zabelin will be covering the significance of political gridlock in that country later at 4:00 GMT after the Chinese data. 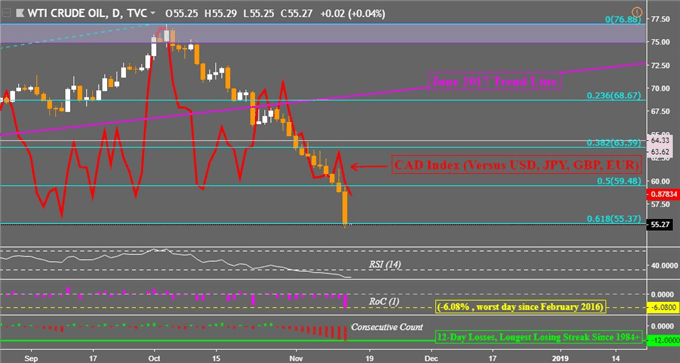 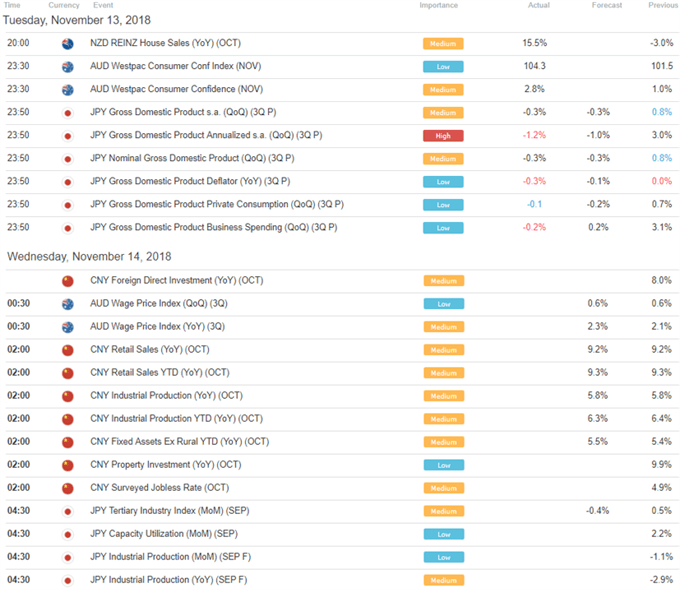