The New Zealand Dollar soared against its major counterparts towards the final moments of Tuesday’s trading session. Kiwi Dollar was lifted by an impressive jobs reports, which along with a better-than-expected third quarter CPI report, may cause the RBNZ to shift its forward guidance towards favoring a rate hike instead of a balanced view. This could add momentum to NZD/USD’s near-term uptrend.

Meanwhile the British Pound edged cautiously higher against its major counterparts. Brexit Minister Dominic Raab gave a ‘thumbs up’ on his way out of a cabinet meeting. The anti-risk Japanese Yen underperformed as Wall Street finished the day mostly higher, the S&P 500 rose about 0.63%. The US Dollar largely traded sideways against its major counterparts as markets await the results of the 2018 US midterm elections.

Meaningful outcomes from polling data should begin crossing the wires around 2:00 GMT Wednesday November 7th. Forecasts are for Democrats to take control of the House of Representatives while Republicans hold on to the Senate. Such an outcome could end up boosting the US Dollar in the medium-term as this allows US President Donald Trump to revive his outline for an infrastructure spending plam.

This may force the Fed into a steeper tightening cycle which has already been impacted by the 2017 US corporate tax cuts. Given how vulnerable global stock markets were last month, it may very well be that weakness could resume. Until the results are in, Asia Pacific benchmark indexes and FX will be eagerly awaiting the outcome.

As the US midterms outcome is just around the corner, the US Dollar finds itself siting right on top of horizontal support which is a range between 96.16 and 96.05. Should DXY gain on the results, we may see resistance hold between 96.98 and 97.20 which is the August and October high respectively. A push above those exposes the June 20th high at 97.87. A descent through support opens the door to testing a near-term rising trend line from September. 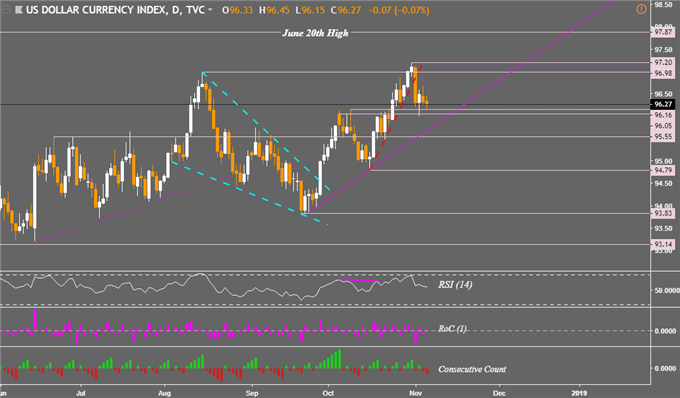 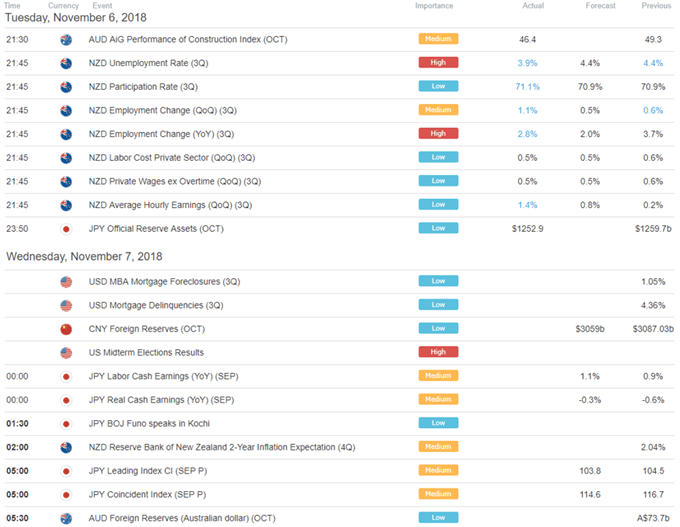