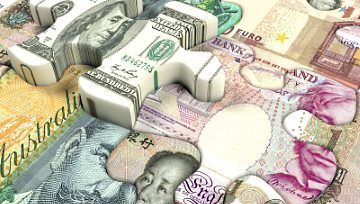 The US Dollar edged cautiously higher against its some of its major counterparts on Tuesday, particularly outperforming against the British Pound and Euro. Threats of a no deal Brexit overshadow GBP and S&P Global Ratings warned that such an outcome ‘could push the UK into a recession’. Meanwhile Italy remains under pressure to resolve their government budget as preliminary estimates showed its economy stagnating.

Two currencies that outperformed against the greenback were the pro-risk Australian and New Zealand Dollars which benefited as the S&P 500 and Dow Jones rallied 1.57% and 1.77% respectively. Technical cues hinted that such a correction might have been in the cards. Meanwhile the anti-risk Japanese Yen depreciated broadly.

Wednesday’s Asia Pacific session is loaded with key event risk. For starters, AUD looks to third quarter local CPI data. But do keep in mind that an RBA which is in no rush to adjust interest rates undermines the ability of domestic economic news flow to offer meaningful and lasting moves to its currency. This may have been why NZD failed to follow up on impressive New Zealand inflation data for example.

Shortly after that, the Aussie Dollar awaits Chinese Manufacturing PMI data. Since China is Australia’s largest trading partner, economic performance in the former can have knock-on effects towards the latter. The world’s second largest economy slowed again in the third quarter of this year and if we see more signs of local weaknesses, AUD/USD and emerging markets could continue being under pressure.

Finally, we are also getting the Bank of Japan monetary policy announcement. But the anti-risk Japanese yen may look past another status quo decision and focus on market mood. As such, we may see APAC benchmark stock indexes echo gains from Wall Street. While AUD may be more focused on near-term data, this may allow the Yen to continue depreciating.

The US Dollar has completed a falling wedge continuation pattern and has now closed at its highest point in about 16 months. This has exposed the June 20th, 2017 high at 97.87 which could act as near-term resistance next. A lack of negative RSI divergence hints that upside momentum remains strong. Still, immediate support seems to be a range just above 96.00. 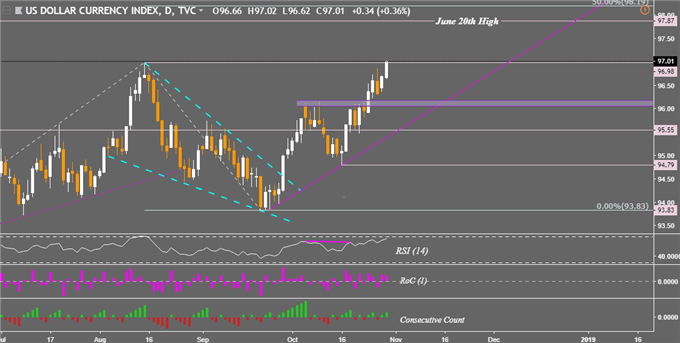 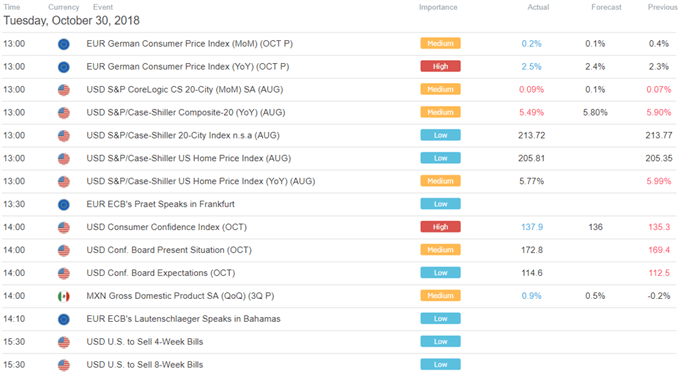 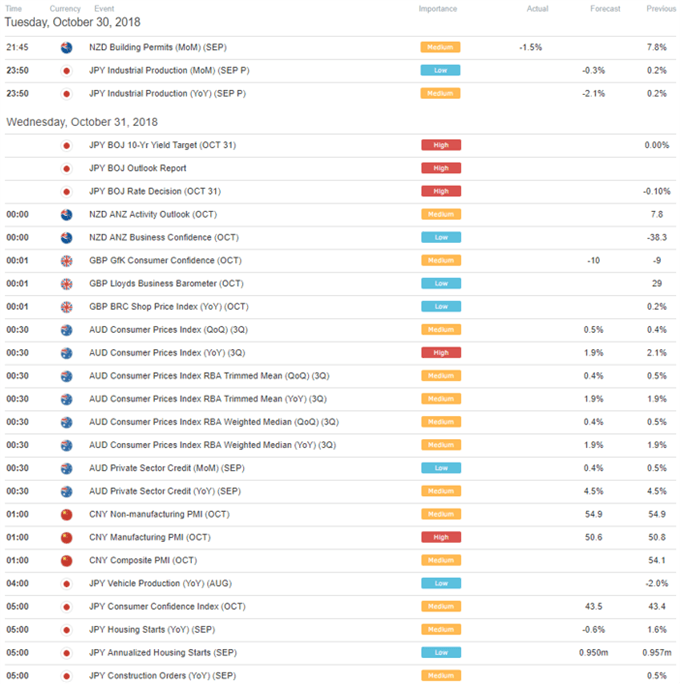