The US Dollar edged cautiously higher against most of its major counterparts Thursday, propelled by weakness in the Euro. All eyes were on ECB’s President Mario Draghi following a widely expected status quo rate decision. Mr. Draghi delivered rather dovish commentary, adding that incoming data ‘has been weaker than expected’.

Simultaneously, we also saw weakness in the British Pound which may have also been as a result of a surge in the greenback. Mario Draghi also cited that notable risks include Brexit, trade and Italy. Speaking of Brexit, Sterling found additional weakness later when reports crossed the wires that negotiations were said to be on hold. UK Prime Minister Theresa May’s cabinet appears to be having issues on agreement.

One currency that managed well against USD was the pro-risk Australian Dollar which got a boost from a recovery in European and US benchmark stock indexes as expected. The DAX and S&P 500 gained around 1.03% and 1.86% respectively. The former was boosted as upbeat earnings report from Microsoft and Tesla. However, disappointing ones from Amazon and Alphabet after market close poses a risk for stocks.

S&P 500 futures are pointing lower as we head into the end of the week for Asia Pacific equities, warning that the Nikkei 225 could be under pressure. Especially given that a lack in key economic data allows markets to focus on the shaky bigger picture for risk trends. However, keep in mind that there may also be temporary corrective gains for APAC shares after aggressive declines in regional bourses in recent weeks.

As a result of Euro weakness, EUR/USD continues making downside progress after descending through rising support from late September. After clearing 1.14320 (October 9th low), the current 2018 low (which is also near the July 5th low) may hold as support next around 1.13126. This is also closely aligned with the 78.6% Fibonacci extension. Resistance appears to be the 61.8% level at 1.13846. 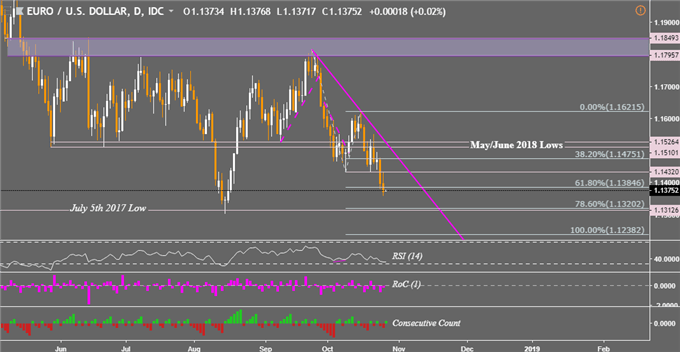 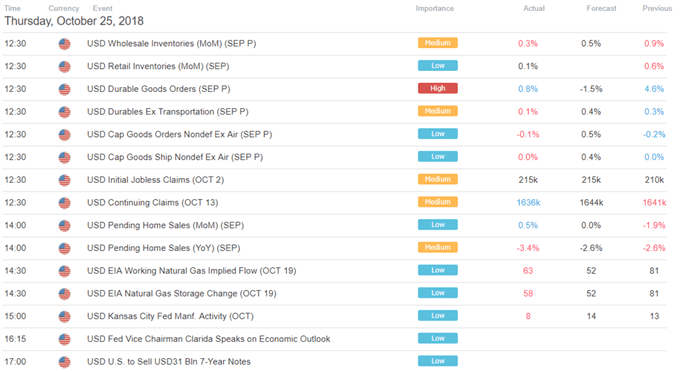