Can US Dollar Price Gains Last as S&P 500 Index Fell? JPY May Rise

The US Dollar started off the new week with gains against most of its major counterparts. Its status as the world’s reserve currency helped it to capitalize on a rout in European benchmark stock indexes despite progress in Asia Pacific equities. The latter may have helped the DAX and Euro Stoxx 50 gap to the upside, but almost immediately these indexes began trading lower.

With that in mind, the initial positivity in market mood did not last long and this transitioned into Wall Street. The S&P 500 and Dow Jones declined 0.43% and 0.50% respectively as US government bond prices rose, signaling a flight to safety. As a result, we saw the anti-risk Japanese Yen pare losses from the first half of Monday’s session as it finished the day little changed.

Gains in USD weighed against the ‘pro-risk’ Australian and New Zealand Dollars despite the initial ‘risk-on’ trade. Meanwhile the British Pound underperformed, held down by the greenback and recent Brexit news. According to a report from the Telegraph, the Northern Irish Democratic Unionist Party is said to back a Tory Eurosceptic amendment that would make an Irish backstop illegal.

Much like yesterday, Tuesday’s Asia Pacific trading session is rather quiet in terms of economic data. This places risk trends as the primary driver for markets. With that in mind, we may see the Nikkei 225 and its local counterparts follow Wall Street lower. This risks sending the AUD and NZD lower while JPY gains. Speaking of, the Aussie Dollar will await commentary from a couple of RBA speakers.

Should sentiment continue deteriorating, we may also see emerging markets trade lower later on. This may add pressure to the Brazilian Real which is at risk to local elections that may also reverberate back into currencies like AUD/USD and NZD/USD. Our Analyst Dimitri Zabelin will be hosting a webinar later this Thursday in which he will be discussing the impact of Brazilian elections on markets at 22:00 GMT.

The US Dollar is once again attempting to resume its uptrend from late September following a falling wedge continuation pattern. However, immediate resistance is holding up between a range of 96.05 to 96.16. Negative RSI divergence shows that upside momentum is fading and it warns that the next move could be lower. A descent has support at 95.55 followed by a near-term rising line from last month. 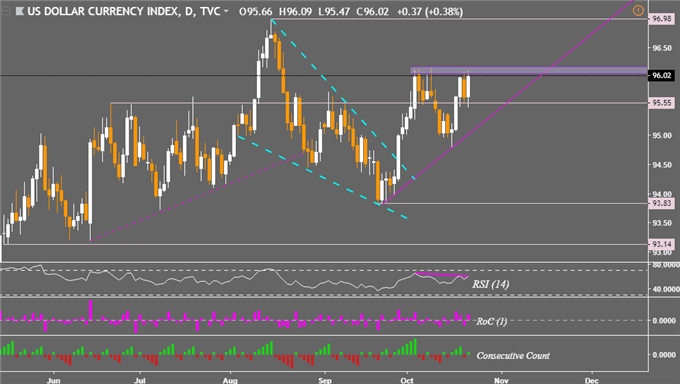