The Canadian Dollar underperformed against its major counterparts Friday following a softer-than-expected local inflation report. Canada’s headline CPI rate clocked in at 2.2% y/y in September versus 2.7% anticipated which was its weakest since May. This comes ahead of this week’s BoC rate decision. While rate hike bets were reduced, core inflation only ticked down to 1.9% from 2.0%.

Meanwhile the Euro edged cautiously higher verses its peers after welcoming remarks towards Italy from EU Commissioner Pierre Moscovici. He noted that members are engaged in ‘good dialogue’ with Italian government heads, adding that the EU won’t interfere in their economic policies. This was also a reversal of Thursday’s rather pessimistic tone which boded ill for the Euro.

One currency that saw sudden knee-jerk volatility was the British Pound, and it was fueled by the latest Brexit news. Reports crossed the wires that the nation was ready to drop a key Brexit demand on the Irish Border in order to ease a deal. Initially, GBP/USD rose aggressively. However, most gains were pared as this created a potential issue for UK Prime Minister Theresa May and her grip on power.

European and US benchmark stock indexes swung throughout their trading sessions on Friday, the S&P 500 and Euro Stoxx 50 finished the day -0.04% and -0.02% respectfully. The anti-risk Japanese Yen did weaken as S&P 500 futures cautiously rose heading into Wall Street market open. Afterwards, JPY held on to losses amidst the pullback in stocks.

As we begin this week’s trading session, political uncertainty poses as a risk for the Australian Dollar and it may gap lower. Australia’s Prime Minister Scott Morrison faced a by-election over the weekend which threatened his government’s slim majority. Meanwhile, Italy’s credit rating being downgraded to Baa3 by Moody’s during the final moments of last week risks hurting the Euro as well.

Gains in the Euro on Friday resulted in EUR/USD breaking above a near-term descending resistance line when zooming in on a 4-hour chart. In the event that the Moody’s update sinks the Euro in the coming session, the former support/resistance are between 1.15101 and 1.15264 may hold as the pair declines. Otherwise, a push above exposes 1.16104. 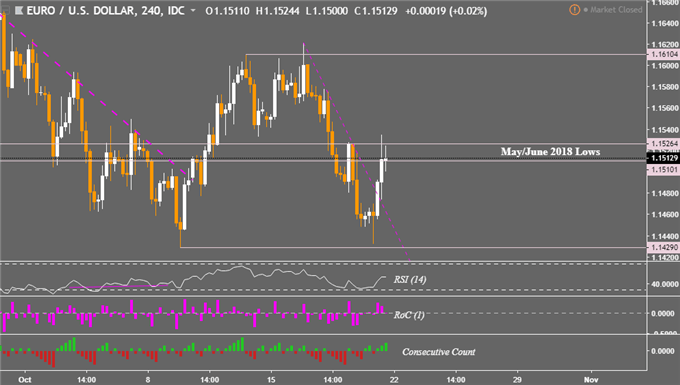 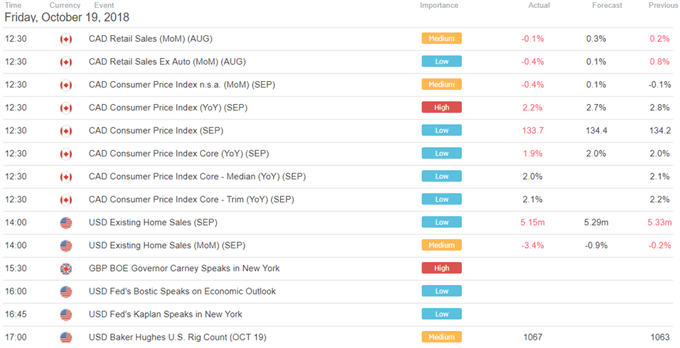