As expected, the decline in market mood from Asia trade as the Shanghai Composite dropped about 2 percent echoed into European and US equities on Thursday. This seemed to be after the FOMC minutes reiterated hawkish commentary, reigniting rate hike bets. The S&P 500 declined 1.44%, clocking in its worst performance in a day in exactly one week.

Understandably, the US Dollar resumed its appreciation as it climbed to its highest since October 4th. This was also fueled by Euro weakness as Italian budget woes struck again. Earlier in the day, Italian Deputy Premier Matteo Salvini noted that their budget proposal will not be changed. Then later in the day, EU’s Pierre Moscovici said that Italy’s budget deficit can’t stay at 2.4%, conflicting with Salvini’s wishes.

Not surprisingly, the spread between Italian and German government bond yields widened which reflected the rising risk associated with investing in the former nation as opposed to the latter. European stocks indexes declined, with the Euro Stoxx 50 down about 1 percent. The anti-risk Japanese Yen also benefited from the deterioration in sentiment. 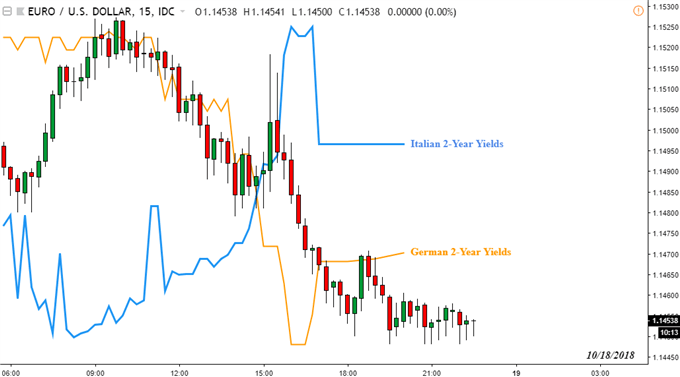 Friday’s Asia Pacific trading session may see weakness in stocks echo into local shares, perhaps driving the Japanese Yen higher. JPY also faces Japanese CPI data. However, given that the BoJ is unlikely to shift its monetary policy setting any time soon, its impact is likely to be overshadowed by developments in risk trends and external forces.

That is the third quarter Chinese GDP data which could have both immediate and longer lasting consequences for market mood. The economy is anticipated slow to its weakest in almost a decade, following the path of a general pullback in global growth excluding the United States. This may send the Australian Dollar lower and potentially be a catalyst for the next major market selloff.

We will be covering Chinese GDP live as well as how the Australian Dollar reacts. To sign up for the event, click the link below! 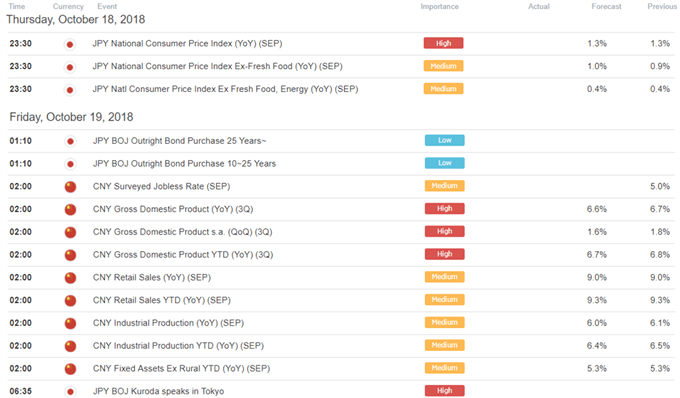