The anti-risk Japanese Yen and Swiss Franc were among the worst performing majors on Tuesday. These currencies were undermined amidst a broad improvement in market mood as equities traded higher in Asia, Europe and in America. The S&P 500 and Dow Jones rallied 2.15% and 2.17% respectively. If the pullback in the former is done for now, it falls short of the more aggressive decline seen in February below. 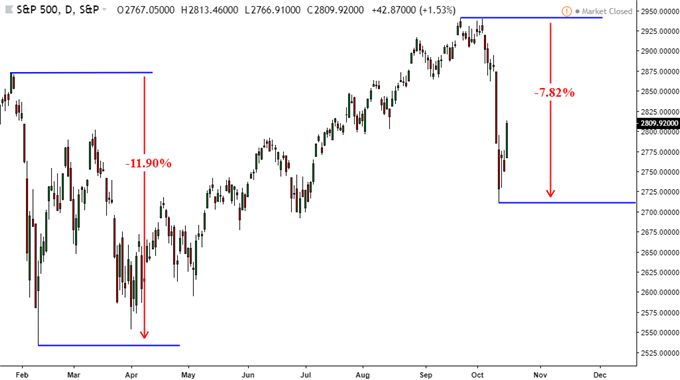 The upbeat mood picked up pace during Wall Street trade as Goldman Sachs and Morgan Stanley, along with other US companies such as Netflix, beat earnings estimates for the third quarter. In addition, the markets may have pre-positioned themselves for tomorrow’s FOMC meeting minutes which could reignite hawkish policy bets. Those were somewhat diminished last week amidst the broad selloff in stocks.

The British Pound outperformed despite disappointing news from EU Chief Negotiator Michel Barnier. He said that more time is needed to find an agreement on Brexit. His announcement helped top Sterling, which gained earlier thanks to a component of UK wage data rising to its highest since January 2009. GBP was also helped by supportive commentary from German and Austrian officials ahead of Barnier’s speech.

Gains in Sterling during the first half of Tuesday’s session weighed against the US Dollar which also offered a lift to other relatively high-yielding currencies. Notably the New Zealand and Australian Dollars rose. However, gains in those were pared as the greenback bottomed ahead of Wall Street open and pared some of its losses.

Wednesday’s Asia Pacific trading session is notably lacking key economic event risk, placing risk trends as the dominant driver for markets. We may see local equities echoing gains from the US, further weighing against the anti-risk Yen. Looking ahead though, we have Australian employment and Chinese GDP data later this week, both of which we will be covering live and you may sign up for these events below.

Zooming in on the AUD/USD 4-hour chart, we can see that the pair is attempting to break above a near-term descending range of resistance from late last month. However, prices appear to be stalling right on the December/May 2016 lows. Confirmation of more closes above resistance would expose the pair to eventually retesting the descending trend line from February. But 0.72283 must be breached first. Meanwhile, former resistance now support seems to be preventing a GBP/AUD reversal lower. 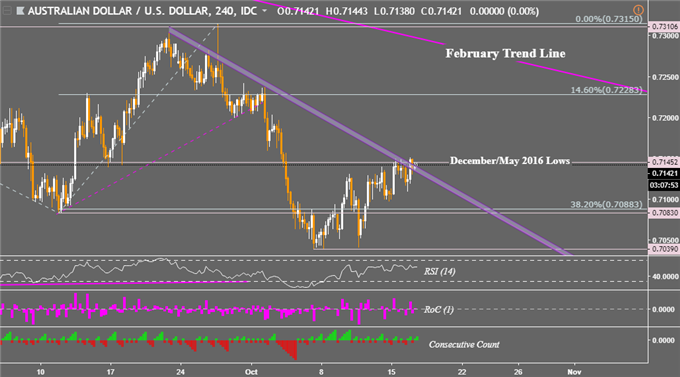