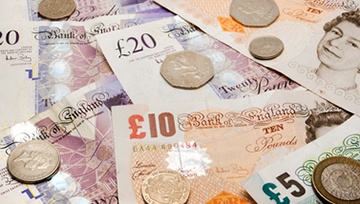 After declining since October 4th, the US Dollar took a pause and gained ground against most of its major counterparts as the global stock selloff took a breather. Gains notably accelerated, particularly against the British Pound, as the markets transitioned to Friday’s European trading session. There, the DAX and Euro Stoxx 50 gapped higher, but almost immediately began declining.

The US Dollar’s appreciation then picked up pace as local government bond yields declined, signaling traders prioritizing safety. Last week we saw the greenback failing to capitalize on its status as the world’s reserve currency. This could have been amidst optimism on Brexit progress as the Euro and British Pound appreciated, but this time was different.

This week offers a couple of notable event risk for the Pound and Euro. For the former, Tuesday holds the possibility that EU ministers could sign off on the draft of Brexit summit conclusions. For the latter, Italy is scheduled to send final budget to the European Commission on Monday for their approval. Perhaps investors were taking bets in the event things go wrong.

During Wall Street trading, the S&P 500 gapped higher before immediately heading lower. However, the index managed a last minute push to the upside. For now, this could only mean little more than a correction. With that in mind, baring adverse event risk that crosses the wires during the weekend, we may see the somewhat improvement in market mood echo into Monday’s Asia Pacific trading session.

After Friday’s performance, the British Pound is yet again facing another bearish engulfing reversal candlestick pattern against the US Dollar. However, the near-term ascending support line from earlier this month still holds. With that in mind, a close under could be confirmation that the next leg will be lower for GBP/USD. Meanwhile immediate resistance is around 1.3241. 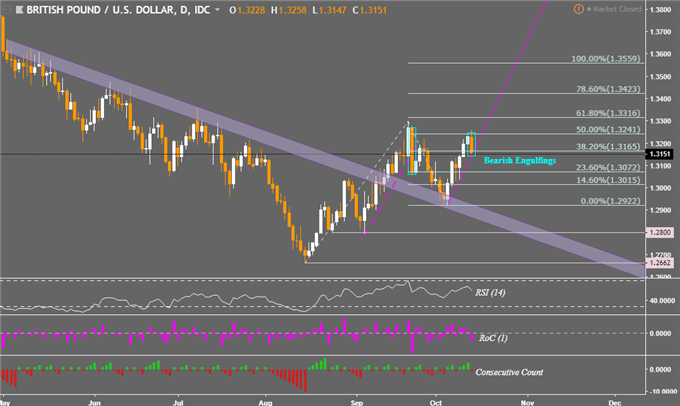 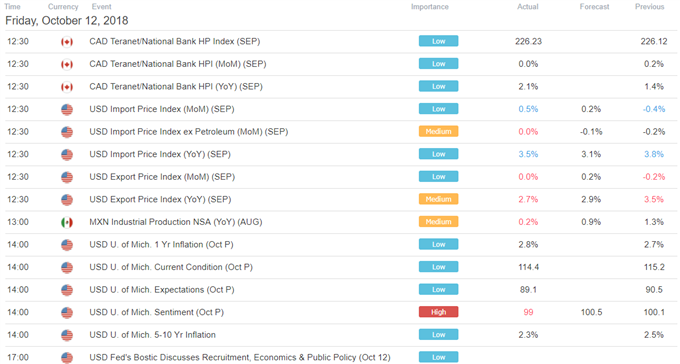