On Friday, the British Pound extended pronounced gains against its major counterparts for a second day in a row. Initially, Sterling was buoyed by reports that a Brexit deal is ‘very close’ amidst an offer from the EU for a free-trade deal. The details of the proposal will be presented by EU Chief Negotiator Michael Barnier this Wednesday.

Additional GBP’s gain could be attributed to a pullback in the US Dollar on a rather mixed jobs report as unemployment fell but total hires missed expectations. Adding more downside pressure to the US Dollar, relatively speaking, was a somewhat solid jobs report out of Canada. The country added 63.3k employees in September which was the most this year so far and since December 2017.

The Canadian Dollar popped on these statistics but gains were somewhat restrained in the aftermath. While the nation surprised markets with total job increases, hourly earnings for permanent employees only ‘clocked in’ at 2.2% y/y. This was the weakest pace of growth in one year exactly. Sentiment-linked currency were generally under pressure Friday, and for that matter the majority of last week.

The S&P 500 dropped as much as 0.97% over the course of the past five days, marking its worst performance in a month. Developing nations fared even worse. The MSCI Emerging Markets ETF dropped a whopping 4.84%, marking its worst decline since early February. Simultaneously, US government bond yields soared to multiyear highs, reflecting prospects of tightening global credit conditions.

As we get started with a new week, the markets will be eyeing who will be the remaining two candidates from the first round of Brazil’s presidential election that takes place on Sunday. There may be some positivity from local stock markets and the BRL initially should Jair Bolsonaro, of the Social Liberal Party, win.

Keep a close eye on how Asia Pacific benchmark indexes react to weaknesses in European and US stocks from Friday’s session. Declines in the Nikkei 225 could bolster the anti-risk Japanese Yen as it did previously. Meanwhile pro-risk currencies such as the Australian Dollar could keep suffering. Both AUD/USD and GBP/AUD are eyeing new levels after breaking critical barriers last week. 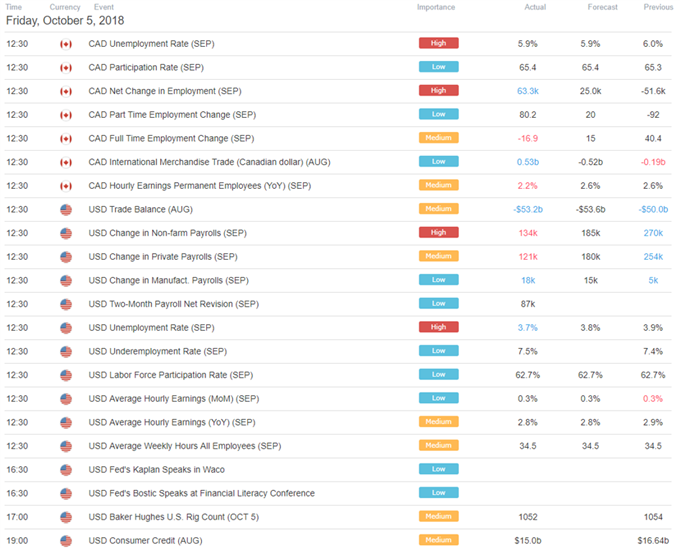