Following Tuesday’s Asia Pacific trading session, the Euro and British Pound experienced pronounced declines against their major peers. This occurred as Italy’s head of the lower house budget committee Claudio Borghi noted that the country would be able to resolve its problems with its own currency. Deputy Prime Minister Luigi Di Maio then said that the government is not willing to exit the Euro or the EU.

Reassurance from the leader of the Five Star Movement (Di Maio) offered little respite for Euro prices though as he reiterated that they will not be backing down from their 2.4% budget deficit target. One that could be rejected by the European Commission. Most EU benchmark stock indexes gapped lower, offering a lift to the anti-risk Swiss Franc and Japanese Yen. The US Dollar capitalized on losses in EUR & GBP.

There was a pickup in equities towards the latter half of Tuesday’s trading session as the S&P 500 gapped higher, but gains were paired as the index ended the day little changed. The US Dollar edged cautiously to the upside as Fed Chair Jerome Powell spoke at the NABE conference in Boston. Mr. Powell backed ongoing gradual hikes for an ‘extraordinary’ economy. DXY closed at its highest since August 24th.

In our Q4 Japanese Yen forecast, we highlighted a critical resistance barrier that could have prevented the dominant uptrend from March resuming. That barrier has been breached at 113.06 but now a bearish engulfing candlestick pattern has formed at the most recent peak. While this may be a precursor to a reversal, confirmation of one would be needed via a daily close under the near-term rising support line. 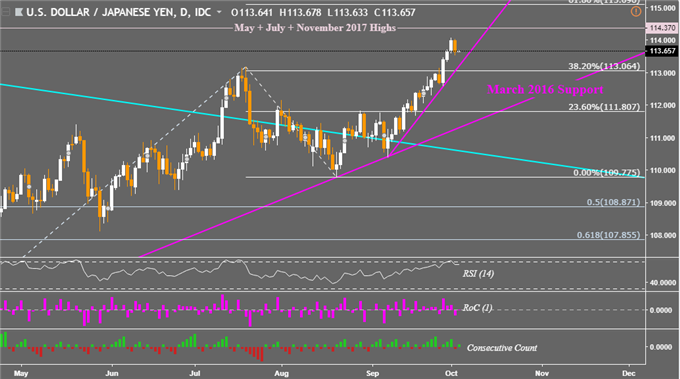