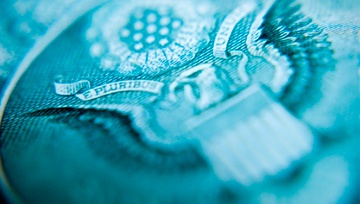 In this edition of Central Bank Watch, we’ll review comments and speeches made by various Federal Reserve policymakers before the communications blackout window ahead of the November Fed meeting. For the most part, Fed policymakers deployed very hawkish tones in September and October, dismissing the idea that the rate hike cycle is finished and that a pause is coming in early-2023.

While the Fed is committed to do ‘whatever it takes’ to bring down inflation, it should be noted that the tone deployed by a few FOMC members began to soften just ahead of the blackout window – leading to rampant speculation of when a ‘pivot’ may arrive. Nevertheless, the hotter than expected September US inflation report (CPI) and the strong September US nonfarm payrolls report suggest that aggressive policy tightening efforts will continue in 2022.

September 25 – Bostic (Atlanta president) said that, as the Fed fights inflation by raising interest rates, the US economy could slowdown in a “relatively orderly way” and that “there will likely be some job losses.”

September 26 – Collins (Boston president), in her first remarks since taking the job running the Boston Fed, noted that she anticipates “that accomplishing price stability will require slower employment growth and a somewhat higher unemployment rate.”

September 27 – Bullard (St. Louis president) commented on the threat high inflation posed to the Fed’s credibility, and that “this is a serious problem and we need to be sure we respond to it appropriately.”

Kashkari (Minneapolis president) affirmed that “there’s a lot of tightening in the pipeline. We are committed to restoring price stability but we also recognize given these lags there is a risk of overdoing it.”

September 28 – Bostic said that he saw at least another 125-bps worth of rate hikes in 2022, and “the lack of progress thus far has me thinking much more now that we have to get to amoderately restrictive stance.”

Evans (Chicago president) noted the Fed’s main rate “is beginning to move into restrictive territory, but with inflation as high as it is, and getting inflation under control being job one, it’s not nearly restrictive enough.”

September 29 – Daly (San Francisco president) stated that she is “completely resolute to bring inflation down.”

Bullard referenced the September Summary of Economic Projections, and observed that “if you look at the dots, it does look like the committee is expecting a fair amount of additional moves this year.”

September 30 – Daly reiterated that “our No. 1 priority is to get inflation down,” and that she believes the Fed “will take additional rate hikes,” which is “the right thing to do to bring the economy back inbalance.”

Brainard (Fed Vice Chair) pushed back against the narrative that the Fed would cut rates quickly in 2023, having noted that “monetary policy will need to be restrictive for some time to have confidence that inflation is moving back to target. For these reasons, we are committed to avoiding pulling back prematurely.”

October 3 – Barkin (Richmond president) discussed the implications of Fed policy for the global economy, and said “the thing you worry about is what collateral damage could there be to international economies and in particular their financial systems.”

Williams (New York president) said there have been signs that “tighter monetary policy has begun to cool demand and reduce inflationary pressures.”

October 4 – Daly commented that “inflation is a corrosive disease, it is a toxin that erodes

the real purchasing power of people.”

October 5 – Daly gave her support for additional 75-bps rate hikes, and commented that “we’re data dependent. When the data show what we need tosee, then we will downshift.”

Bostic discussed his rate hike expectations through the end of 2022, and outlined that he “would like to reach a point where policy is moderatelyrestrictive – between 4% and 4.5% by the end of thisyear – and then hold at that level and see how the economy and prices react.”

October 6 – Kashkari pushed back on the narrative that the Fed would halt its rate hike cycle soon, and noted until he sees “some evidence that underlying inflation hassolidly peaked and is hopefully headed back down, I’m not readyto declare a pause. I think we’re quite a ways away from apause.”

Cook (Fed governor) said that “with inflation running well above our 2% longer-run goal,

restoring price stability likely will require ongoing rate hikesand then keeping policy restrictive for some time until we areconfident that inflation is firmly on the path toward our 2% goal.”

Evans remarked that the main rate is likely “headed for 4.5% to4.75% by sometime next year.”

Mester (Cleveland president), like others, pushed back against the narrative of a pause in the rate hike cycle, and said “we have to bring interest rates up to a level that will getinflation on that 2% path, and I have not seen the compellingevidence that I need to see that would suggest that we couldstart reducing the pace at which we’re going.”

October 7 – Williams stated that the main rate will likely rise to 4.5%, and “the timing of that and how high do we have to raise interestrates is going to depend on the data.”

October 10 – Brainard hinted at concerns that raising rates too far could hurt the US economy, and commented that “front-loading was a good thing, given how far below neutral rates were. But overshooting is costly, too, and there is great uncertainty about how restrictive policy must actually become.”

October 11 – Mester reiterated her support for additional rates hikes, such that “monetary policy will need to become more restrictive in order to put inflation on a sustainable downward path to 2%.”

October 12 – Kashkari outlined what it would take for the Fed to pause its rate hike cycle, and stated “for me, the bar for such a change is very high because wehave not yet seen much evidence that the underlying inflation – the services inflation, the wage inflation, the labor market – that that is yet softening.”

The September FOMC meeting minutes were released, which included the perspective that “several participants noted that, particularly in the current highly uncertain global economic and financial environment, it would be important to calibrate the pace of further policy tightening with the aim of mitigating the risk of significant adverse effects on the economic outlook.”

Bowman (Fed governor) confirmed support for additional tightening when she said “if we do not see signs that inflation is moving down, my view continues to be that sizable increases in the target range for the federal funds rate should remain on the table.”

October 14 – Cook commented that she saw the need for additional rate hikes.

Daly called the September US inflation report “disappointing,” and said she preferred to see the main rate between 4.5% and 5%.

George (Kansas City president) warned that if rates were raised too quickly they could “disrupt financial markets and the economy in a way that ultimately could be self-defeating.”

October 18 – Bostic suggests that the Fed will have a difficult time achieving its mandate for maximum employment unless it can bring inflation back under control.

October 19 – Bullard notes that markets have are correctly anticipating additional rates hikes, and that it’s important for the FOMC to “follow through” given that inflation rates “continue to surprise to the upside.”

The Beige Book (for data collected up to October 7) notes that, while the US economy grew “modestly” into early-October, “outlooksgrew more pessimistic amidst growing concerns about weakeningdemand.”

Evans opined that “inflation is just muchtoo high, and so we need to continue on the path that we’ve beenindicating.”

October 20 – Harker (Philadelphia president) commented that “given our frankly disappointing lack of progress oncurtailing inflation, I expect we will be well above 4% by theend of the year,” before suggesting that a pause in the rate hikes could come thereafter.

October 21 – Daly said it’s not yet time to “step down” the pace of rate hikes, although “it shouldat least be something we’re considering at thispoint, but the data haven’t been cooperating.” 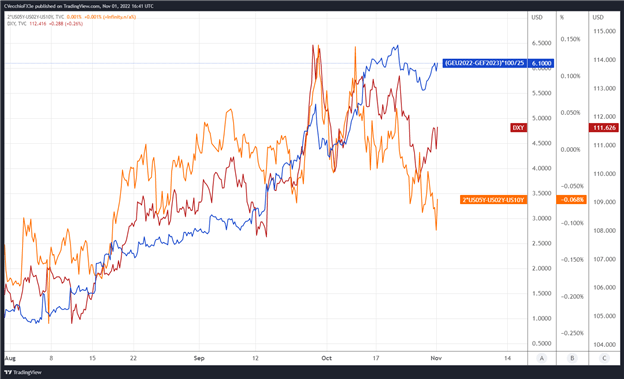 Since the start of August, there has been a fairly tight relationship among the DXY Index, the shape of the US Treasury yield curve, and Fed rate hike odds. After another stubbornly hot US inflation report, Eurodollar spreads are still pricing a full 75-bps rate hike for the next Fed meeting in November and potentially another 75-bps rate hike in December. 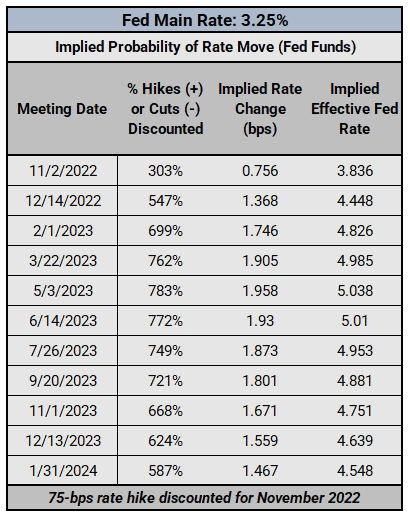 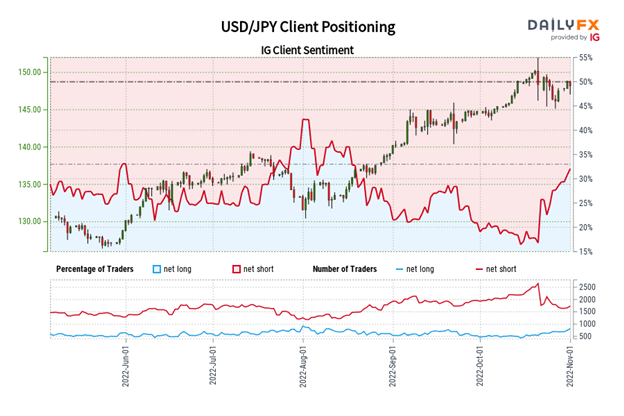