Not Just Talking About Tapering Anymore

In this edition of Central Bank Watch, we’ll review the speeches by various Federal Reserve policymakers since the September 22 Fed meeting. There is a clear theme that has emerged in recent weeks: inflation pressures may not be so transitory after all, and that could require an immediate reduction in asset purchases which would continue at a brisk pace in the first half of 2022.

September US NFP Could Seal the Deal

It was correctly anticipated that the September Fed meeting would yield a strong hint that the taper will begin before the end of the year. However, Fed policymakers don’t seem content with just offering a strong hint: several have made crystal clear that they believe “substantial progress” has been achieved and that tapering should begin as soon as the next Fed meeting in November. If the September US NFP report comes in at or better than expectations, markets will likely respond by aggressively discounting this reality.

September 24 – Powell (Fed Chair) suggests that inflation will remain elevated beyond the Fed’s prognosis earlier in the year, suggesting that he’s “never seen these kind of supply-chain issues, never seen an economy that combines drastic labor shortages with lots of unemployed people and a lot of slack in the labor market.”

Mester (Cleveland president) argues for tapering to begin as soon as the next Fed meeting, saying “I support starting to dial back our purchases in Novemberand concluding them over the first half of next year,” and in terms of rate hikes, “as the recovery continues, labor markets will continue to improve, and I expect that the conditions for liftoff of the fed funds rate will be met by the end of next year.”

September 27 – Evans (Chicago president) offers some dovish guidance, saying that he does “not think the supply-side-induced transitory surge in inflation we are seeing today will be enough to do the trick," and that he expects “that we will need a period of sustained, monetary- policy-induced overshooting of 2% inflation to boost long-run inflation expectations enough to deliver on our mandated goals.”

Brainard (Fed governor) sounds dovish as well, noting that “employment is still a bit short of the mark on what I consider to be substantial further progress.”

Williams (NY president) warns about a US debt ceiling breach, saying “if you actually crossed that line and got into a place where the government wasn’t paying all of its obligations, I think it would create a very negative dynamic, not only in the U.S. but around the world.”

September 28 – Powell comments on inflation again, this time during his testimony in front of the Senate Banking Committee, noting “these effects have been larger and longer lasting than anticipated, but they will abate, and as they do, inflation is expected to drop back toward our longer-run 2% goal.”

Bullard (St. Louis president) warns that the Fed should be prepared to act quickly given the “upside risks” to the inflation outlook.

Powell speaks about inflation again at a European Central Bank virtual event, suggesting that upside price pressures are transitory, commenting that “the current inflation spike is really a consequence of supply constraints meeting very strong demand, and that is all associated with the reopening of the economy -- which is a process that will have a beginning, a middle and an end.”

October 1 – Harker (Philadelphia president) suggests he is “in the camp of being moreworried that inflation isn’tas transient as we think,” and that not only should tapering begin in November, but “then running it pretty quickly -- that is, trying to stop the asset purchases by, say, next summer.”

Mester says that she is in favor of reducing asset purchases starting in November.

October 4 – Bullard warns that he is “concerned about the changing mentality…around prices in the economy and the relative freedom that businesses feel that they can just pass on increased costs easily to their customers.”

Evans notes that supply chain disruptions are guiding his thought process around monetary policy, insofar as he is “comfortable thinking that these are elevated prices, they will be coming down as the supply bottlenecks are addressed.”

We can measure whether a Fed rate hike is being priced-in using Eurodollar contracts by examining the difference in borrowing costs for commercial banks over a specific time horizon in the future. Chart 1 below showcases the difference in borrowing costs – the spread – for the September 2021 and December 2023 contracts, in order to gauge where interest rates are headed by December 2023. 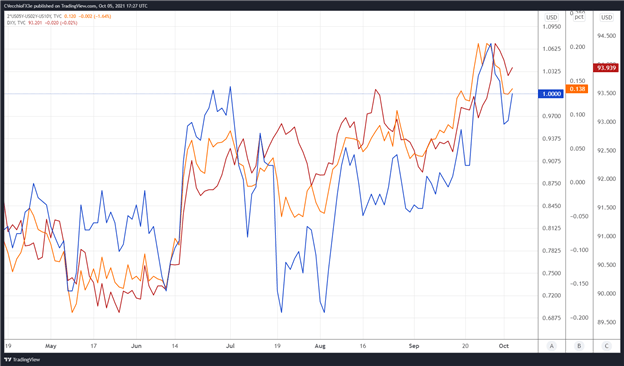 There are exactly 100-bps of rate hikes discounted through the end of 2023 while the 2s5s10s butterfly recently reached its widest spread since the Fed taper talk began in June (and its widest spread of all of 2021). Moreover, consistent with recent chatter from FOMC officials, the first rate hike looks increasingly likely to arrive in late-2022. 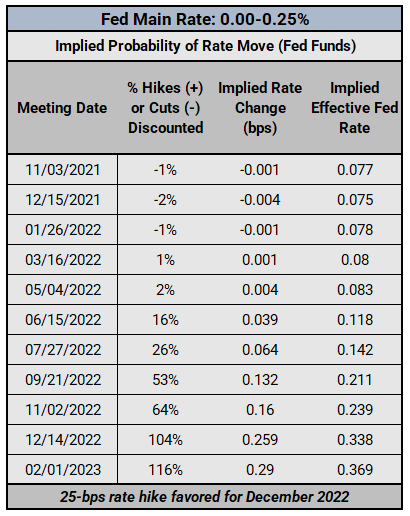 Rate hike expectations have been rather consistent for two months. Ahead of the September Fed meeting, markets were pricing in a 75% chance that the first 25-bps rate hike would arrive in December 2022. Now, nearly two weeks after the September Fed meeting, Fed funds futures are pricing in a 104% chance of the first hike in December 2022; that’s a 100% chance of a 25-bps hike and a 4% chance of a 50-bps hike. This is nearly the most hawkish that rates markets have been since the start of the pandemic. 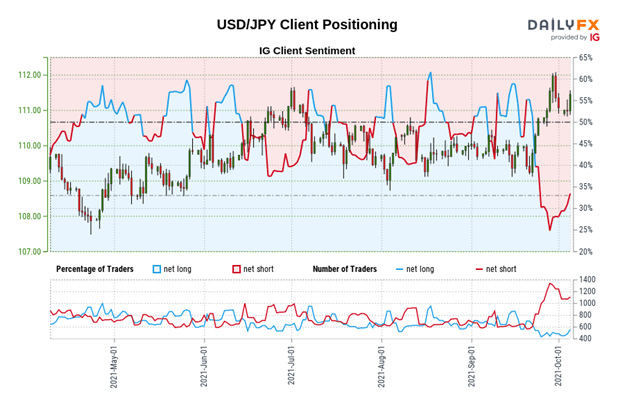