In this edition of Central Bank Watch, we’ll review the speeches made in August by over the past week by various Federal Reserve policymakers – almost every single policymaker except for the Fed Chair himself. No doubt about it, taper talk is increasing in the run-up to the Jackson Hole Economic Policy Symposium, set to take place later this month from the 26th to the 28th.

In the wake of the July FOMC meeting, and in light of the surge in the delta variant caseload in the US, traders began reducing their expectations for a more hawkish Federal Reserve. However, the combined impact of the strong July US nonfarm payrolls report – the second in a row – plus the July US inflation rate report (CPI) has sparked a shift in both market expectations and language used by FOMC policymakers thus far in August.

August 1 – Kashkari (Minnesota president) said that he “he was very optimistic the fall would be a strong labor market with many of those Americans coming back to work…but if people are nervous about the delta variant, that could slow some of that labor market recovery and therefore be a drag on our economic recovery.”

August 2 – Waller (Fed governor) commented on the potential timing of a taper announcement, noting that he believes that the economy “could be ready to do an announcement bySeptember....If the jobs reports come in as I think they’re going to in the next two reports, then in my view with tapering we should go early and go fast, in order to make sure we’re in position to raise rates in 2022 if we have to.”

August 3 – Bowman (Fed governor) offered a more cautious tone on the labor market, having noted that “despite the encouraging pace of recent hiring, employment is still far below where it was. In June of this year, there were 6.8 million fewer jobs than there were in February 2020.”

August 4 – Bullard (St. Louis president) tried to soothe-say markets regarding high inflation readings, having noted that “it’s going to be more persistent than what most people expect....I’d expect something between 2.5 and 3% in 2022. It is going to come down, but not as fast as what many people have in mind.”

Clarida (Fed Vice Chair) commented on the surge in delta variant cases, saying “the monetary and fiscal policies presently in place should continue to support the strong expansion in economic activity that is expected to be realized this year, although, obviously, the rapid spread of the Delta variant among the still considerable fraction of the population that is unvaccinated is clearly a downside risk for the outlook.”

Kaplan (Dallas president) chimed in on the taper timeline, noting “as long as we continue to make progress in July (jobs) numbers and in August jobs numbers, I think we’d be better off to start adjusting these purchases soon.”

August 5 – Waller (Fed governor) took an optimistic tone, saying “the economy has rebounded in an amazing way, and I think that’s going to continue. I have very high hopes for very high jobs reports coming out tomorrow and the following month.”

Kashkari also looked for a silver lining, noting that he’s “optimistic that we should have a strong labor market in the fall, but the wrinkle now, so to speak, is delta.”

August 9 – Bostic (Atlanta president) came out with a hawkish tone hinting at a faster taper timeline, saying that the US economy is “well on the road to substantial progress toward our goal.”

August 10 – Evans (Chicago president), a noted dove, said that he does “expect that we are going to be at the point where we’ve seen substantial further progress later this year -- probably later this year. I don’t think it’s going to be into next year.”

August 11 – Barkin (Richmond president) hinted that a taper is on the horizon, saying “We are closing in ... I don’t know exactly when that will be. When we do close in on it I am very supportive of tapering and moving back toward a normal environment as quickly as the economy allows us.”

Bostic suggested that the Fed’s commitment to maximum employment meant that rates wouldn’t rise “too quickly.”

Daly (San Francisco president) likewise offered a hawkish set of comments, indicating that it may be time to scale-back the ultra-accommodative policy stance of the Fed “by the end of the year.” 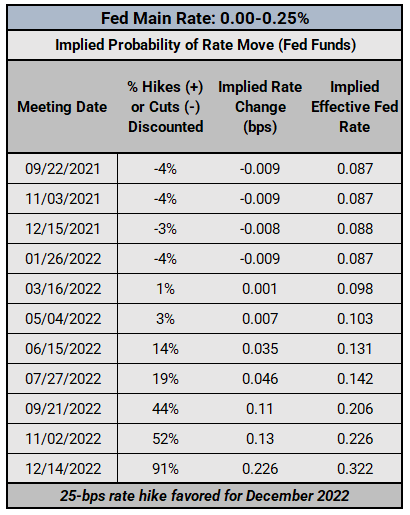 Ahead of the July FOMC meeting, December 2022 was the favored month for the first rate move, clocking in with a 68% chance. However, after the July US nonfarm payrolls report and the July US inflation rate report (CPI), as well as the litany of comments by Fed policymakers, December 2022 now sees a 91% chance of a 25-bps rate hike.

We can also measure whether a rate hike is being priced-in using Eurodollar contracts by examining the difference in borrowing costs for commercial banks over a specific time horizon in the future. Chart 1 below showcases the difference in borrowing costs – the spread – for the August 2021 and December 2023 contracts, in order to gauge where interest rates are headed in the interim period between August 2021 and December 2023. 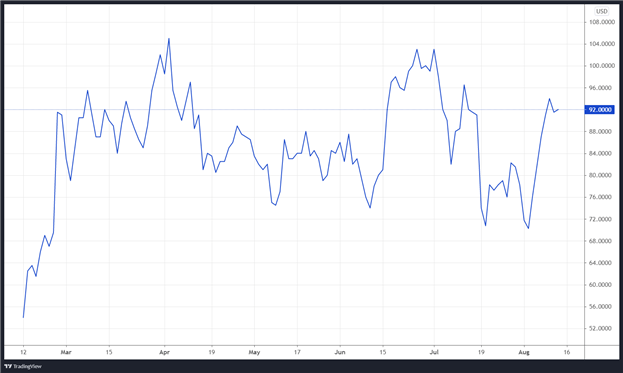 Based on the Eurodollar contract spreads, there 92-bps worth of rate hikes – collectively, three 25-bps rate hikes, plus a 68% chance of a fourth hike – by December 2023. Over the past week, we’ve seen the number of basis-points priced-in increase from a low of 62-bps; in effect, an additional full rate hike has been discounted through the end of 2023.

Historically speaking, sharp upticks in rate hike expectations vis-à-vis Eurodollar spreads have catered to a strong US Dollar environment. Indeed, technical advances by the DXY Index suggest a stronger greenback may be here in the near-term. 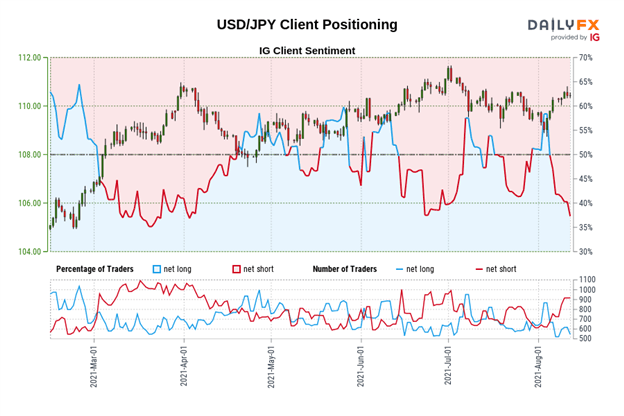