Keep Calm and Carry On

In this edition of Central Bank Watch, we’ll review the speeches made over the past week by various Federal Reserve policymakers, including the Fed Chair himself. In the extended period ahead of the April 28 meeting, Fed policymakers are likely to be more present in the day-to-day machinations of financial markets.

Since the Fed’s March 17 meeting, and even after the blowout US jobs market report, US Treasury yields have eased back. The drumbeat by policymakers that otherwise elevated US Treasury yields are a sign of the market’s confidence in the recovery, not a sign of persistent inflation, has continued in earnest. As noted in the March 30 iteration of this note, it remains the case that “it may be the Fed’s resolute insistence on not bucking to bond vigilantes that ultimately caps bond market volatility.”

April 1 – Bullard (St. Louis Fed president) says “given that inflation has generally been below the 2% target for many years, an inflation outcome modestly above 2% for some time would be a welcome development for the FOMC.”

Daly (San Francisco Fed president) notes that “we know there is an expected and importantly, underline, temporary rise in inflation that is coming this year because we had low readings of inflation during the worst months of Covid in 2020.” Yet she also cautioned against expecting any change in policy soon, saying “we really aren’t projecting achieving either side of our dual mandate in 2021. That is why policy is remaining accommodative so we can absolutely deliver on those goals.”

April 5 – Mester (Cleveland Fed president) calls the recent March US jobs report “great,” but says that recent jobs growth doesn’t mean the economy is in the place the Fed sees a need to raise rates, noting “we’re still almost 8.5 million jobs below where we were before the pandemic so we need more of those kinds of jobs reports coming out.”

April 6 – Barkin (Richmond Fed president) outlined his expectations on growth, saying “You’ve got excesssavings. You’ve got fiscalstimulus funding pent-up demand from consumers like me who’reexhausted from isolation and freed up by vaccines and warmerweather.” He summarized his position by saying that he “expect[s] to see a really strong spring and summer,” and “more jobs are coming as the economy fully reopens.”

April 7 – Kaplan (Dallas Fed president) says that the Fed will continue to accommodate aggressively to support the economy, but also notes that as the economy improves, it would be “healthier” to move away from massive monetary support.

Evans (Chicago Fed president) says that “we’re going to have to go months and months into the higher-inflation experience before I’m going to even have an opinion on whether this is sustainable or not. And that’s going to be uncomfortable.”

Brainard (Fed governor) says that “our monetary policy forward guidance is premised onoutcomes, not the outlook…and so it is going to be some time before both employmentand inflation have achieved the kinds of outcomes that are inthat forward guidance”

The March FOMC minutes were released, and the Fed’s resolute stance towards continuing accommodation remained as noted by two comments in particular. First, that “participants noted that it would likely be some time until substantial further progress toward the Committee’s maximum-employment and price-stability goals would be realized.” Second, that “a number of participants highlighted the importance of the Committee clearly communicating its assessment of progress toward its longer-run goals well in advance of the time when it could be judged substantial enough to warrant a change in the pace of asset purchases.”

April 8 – Powell (Fed Chair), speaking at a virtual panel, says that the Fed “will provide aid to the economy until it no longer needs it,” and that they will “finish the job and get back to a great economy,” noting that “we must invest in lifting economic potential and inclusivity.” While saying that “millions of people will have a hard time finding their way back into the workforce,” he was encouraged by the fact that the “US economy has thus far avoided the worst case scenario.”

Bullard (St. Louis Fed president) says that “full employment can happen within the next year,” but we have a “clearer” end to the coronavirus pandemic prior to even begin discussing tapering the Fed’s accommodative policies. 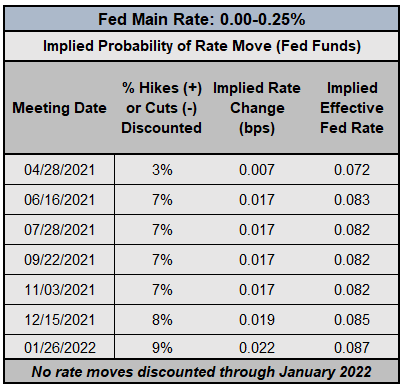 As the sand passes through the hourglass, rates markets are taking the Fed’s resolute position at face value: the main rate isn’t going anywhere anytime soon. Fed funds futures are pricing in a 91% chance of no change in Fed rates through January 2022. There still hasn’t been enough of a shift to warrant a change in outlook, nor do we expect a change in outlook for the foreseeable future. 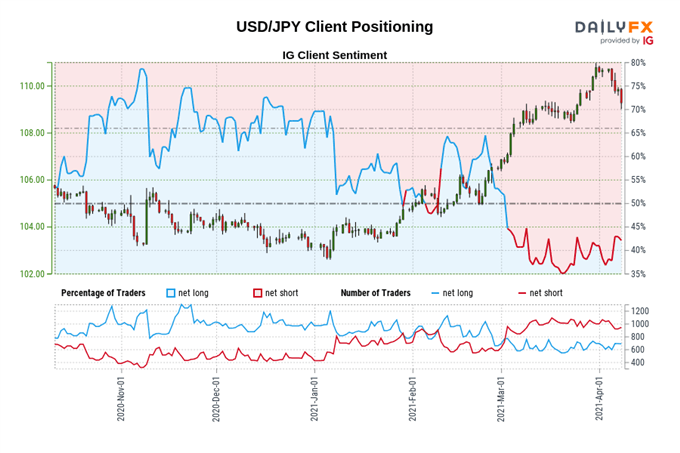