In this edition of Central Bank Watch, we’ll review the speeches made over the past week by various Federal Reserve policymakers, including the Fed Chair himself. Now in an extended period between meetings – the next Fed rate decision is due out on April 28, then not again until June 16 – we are likely entering a several month stretch whereby Fed policymakers are more present in the day-to-day machinations of financial markets.

Following the Fed’s March 17 meeting, US Treasury yields have calmed down – even if they remain significantly elevated relative to the start of this year. But the drumbeat has continued among all the policymakers heard over the past week: rising US Treasury yields are a sign of the market’s confidence in the recovery, not a sign that inflation will run higher and hotter than anticipated. In fact, it may be the Fed’s resolute insistence on not bucking to bond vigilantes that ultimately caps bond market volatility.

Thus far, no comments have been made about whether or not the $20 billion+ implosion of Archegos Capital Management will impact the Fed’s decision to end the SLR; earlier on Tuesday, the NY Fed accepted $107.725 billion in its reverse repo operation across 35 bidders, up from $40.354 billion across 22 bidders.

March 23 – Powell (Fed Chair) says that "we have been living in a world of strong disinflationary pressures -- around the world really -- for a quarter of a century," so "we don’t think a one-time surge in spending leading to temporary price increases would disrupt that."

Kaplan (Dallas Fed president) says "there were some dots starting increases in 2022. And, you know, I’m one of those dots. Yes, absolutely."

Williams (NY Fed president) says "we’re still about 9 million jobs lower than we were a year ago in the U.S. economy, so I think that that’s going to keep inflation pressures pretty low for some time."

Bostic (Atlanta Fed president) says "2023 is the time we’re going to start to be in the liftoff range, and that really hasn’t changed for me, even from December." Additionally, he noted "my models really have inflation above the 2% level for a while, such that at the beginning of 2023 -- in the early half and first half of it -- well, I think we’ll be positioned to move policy.”

March 25 – Powell (Fed Chair) says "As we make substantial further progress toward our goals, we’ll gradually roll back the amount of Treasury and mortgage-backed securities we’re buying. And then in the longer run, we’ve set out a test that will enable us to raise interest rates." Additionally, he noted that "we will -- very, very gradually, over time, and with great transparency, when the economy has all but fully recovered -- we will be pulling back the support that we provided during emergency times."

Bostic (Atlanta Fed president) says "let me say unambiguously that I am not at the moment thinking we will need to remove policy accommodation soon."

Clarida (Fed Vice Chair) says "it will take some time for economic activity and employment to return to levels that prevailed at the business cycle peak reached last February." Furthermore, he noted that "we are committed to using our full range of tools to support the economy until the job is well and truly done to help ensure that the economic recovery will be as robust and rapid as possible."

March 26 – Harker (Philadelphia Fed president) says "our forecast is for inflation to creep up to 2%, and our goal is to have it hit above 2% this year. Our forecast is around 2.1%, but we don’t see it running out of control."

March 29 – Waller (Fed governor), when discussing monetizing the US debt, says "my goal today is to definitively put that narrative to rest. It is simply wrong. Monetary policy has not and will not be conducted for these purposes." 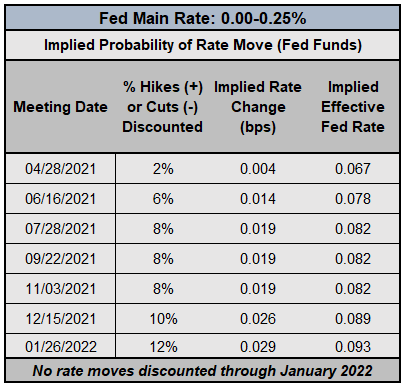 As such, following another week of Fed officials downplaying inflation fears and suggesting that rising US Treasury yields reflect economic optimism, interest rate expectations continue to stay firmly anchored: Fed funds futures are pricing in a 88% chance of no change in Fed rates through January 2022. While this is a hawkish improvement from the 93% chance in mid-March, it is not a material enough shift – yet – to warrant a change in outlook. 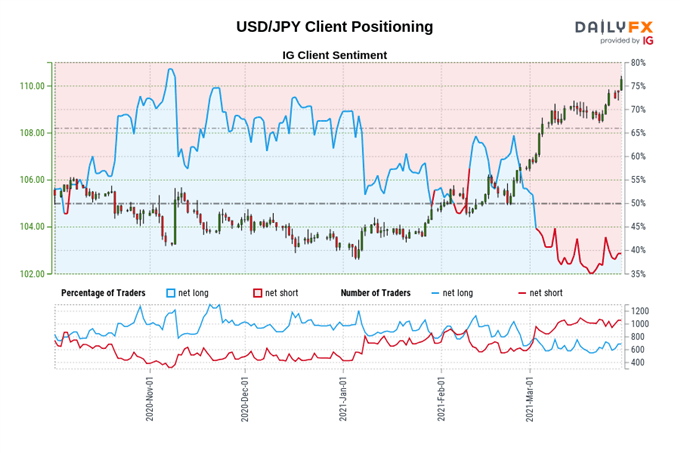