Now into the second month of the year, central bank activity is heating up again. Earlier on Thursday, the Bank of England’s “Super Thursday” produced a strong reaction in the British Pound, thanks in part to a key consideration: they would not move to negative interest rates, even if they suggested banks take preparations for such an event.

The conversation around negative interest rates is not new to a slew of other central banks either: the Bank of Canada, Reserve Bank of Australia, and Reserve Bank of New Zealand. The last of the trio has most openly flirted with the idea, but all three central banks are now positioned to keep rates near, but not below, zero. Now, none of the central banks tied to the commodity currencies (AUD, CAD, NZD) have seen either rate cut or hike odds move meaningfully.

Bank of Canada Complains About CAD

While the Bank of Canada stood pat at its first meeting of the year, Governor Tiff Macklem did not mince words over the problem that an appreciating Loonie is posing for the Canadian economy. “In this situation where we’ve seen this broad-based US dollar deprecation that doesn’t reflect some positive development in Canada that the exchange rate is absorbing…the exchange rate is starting to create a material headwind for the Canadian economy.” Furthermore, it was noted that the recent Canadian Dollar appreciation “is weighing on our exports and it’s also making it harder for our domestic producers to compete against firms in other countries.”

Unfortunately for the BOC, there’s not much that can be done to prevent the Canadian Dollar appreciation vis-à-vis USD/CAD, at least, as Governor Macklem concedes, when “in a situation where our Canada-U.S. exchange rate is moving largely because of made-in-U.S. developments as opposed to made-in-Canada developments.” 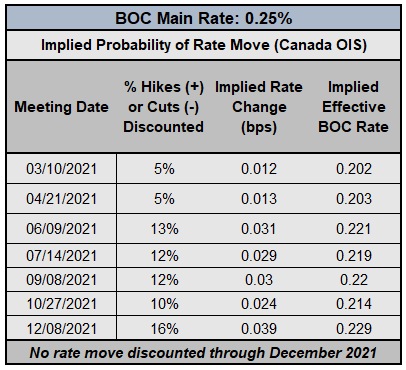 In recent weeks, however, rate hike expectations have started to creep higher. In mid-January, there was a 7% chance of a 25-bps rate cut by the BOC by December 2021. Now, Canada overnight index swaps (OIS) are pricing in a 16% chance of a 25-bps rate hike through the end of the year. While a rate hike seems highly unlikely, these pricing metrics suggests that the possibility of negative interest rates is nill. 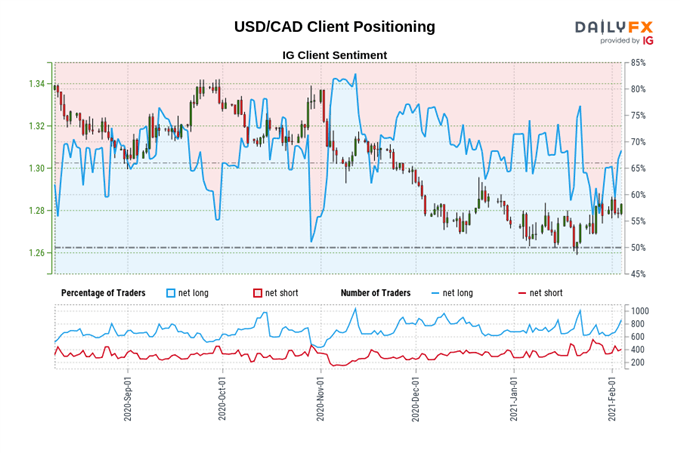 The RBA’s first meeting of 2021 earlier this week came and went without surprise. The outlook from the end of 2020 remains valid: “Even after shifting the focus of policy setting at the November RBA meeting, where officials out a greater focus on actual labor market outcomes (e.g. the unemployment rate) over expected price pressures, the December RBA meeting produced a general consensus that, yes, the situation was still ‘better than expected,’ in Governor Phillip Lowe’s words.” 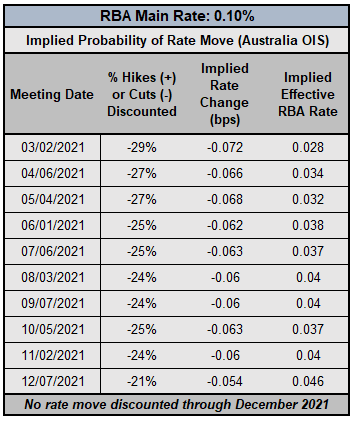 “The RBA is effectively admitting that they’re keeping interest rates where they are because…everyone else is doing it too. Beyond that, the data just doesn’t support the efforts, and rates markets don’t foresee any shifts in policy henceforth. According to Australia overnight index swaps, there is between a 16% to 25% chance of a rate cut through December 2021, which appears to be nothing more than a pricing quirk due to the RBA’s extraordinary efforts to institute yield curve control. The RBA will be keeping its overnight cash rate at 0.1% or lower for at least the next two and a half years.” 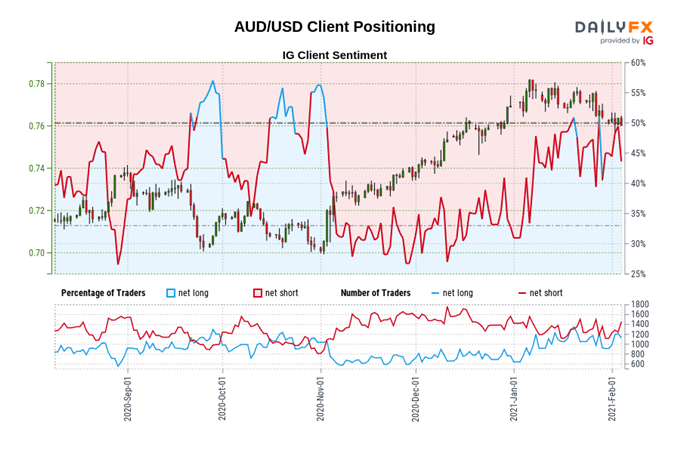 The RBNZ the only of the three commodity currency central banks to not yet meet or produce any commentary thus far in 2021. Our end of year observation regarding the RBNZ’s push to negative interest rates remains valid – they’re not happening. “RBNZ Governor Adrian Orr has had to rebuff a government request to include housing prices in the formal policy setting process, which while seemingly benign, suggests that the economy is experiencing a price bubble and thus would not be receptive to even lower (e.g. negative) interest rates.” 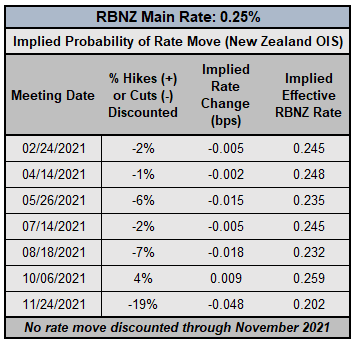 As such, New Zealand overnight index swaps (OIS) are discounting a 6% chance of a rate cut by mid-year, and a 19% chance overall that interest rates could dip to 0% by the last policy meeting of the year. The most likely scenario is that that the main rate will remain at its current level into at least February 2022, and the RBNZ should affirm as much when it meets next last this month on February 24. 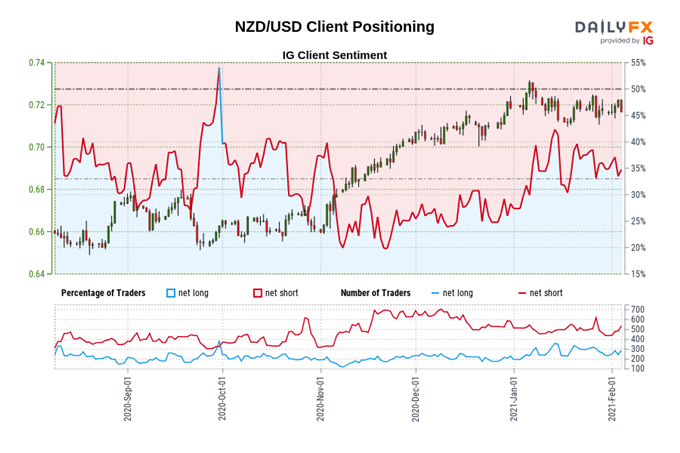 Positioning is less net-short than yesterday but more net-short from last week. The combination of current sentiment and recent changes gives us a further mixed NZD/USD trading bias.