The RBA will kick off the fourth quarter of the year with its October interest rate decision slated for Tuesday at 4:30 GMT and brings Australian Dollar currency pairs into focus. The previous RBA monetary policy statement noted that “it is reasonable to expect that an extended period of low interest rates will be required in Australia to make progress in reducing unemployment and achieve more assured progress towards the inflation target.”

Subsequently, there was a sharp uptick in RBA rate cut expectations about two weeks ago in response to uninspiring Australian employment data, which detailed an uptick in the unemployment rate to 5.3% despite a rosier reading on the headline change in employment figure. Traders are currently pricing a 79.6% probability that the October RBA meeting reveals another 25-basis point cut to the central bank’s overnight cash rate (OCR) according to overnight swaps data pulled from Bloomberg. 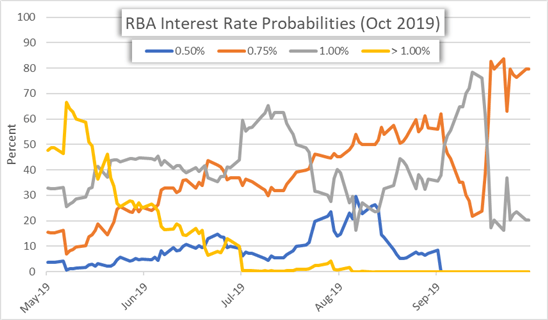 This is up sizably from the 21.7% probability priced on September 13 and compares to the RBA Shadow Board’s 24% probability. As such, there’s serious potential that the upcoming RBA decision disappoints dovish expectations, which could lead to a steep jump in the Australian Dollar if the central bank continues to favor a firm monetary policy stance since announcing back-to-back rate cuts at the June and July RBA meetings. The uncertainty surrounding what the Reserve Bank of Australia and Governor Lowe will announce has bid up Australian Dollar implied volatility measures in turn.

AUDUSD overnight implied volatility was just clocked at 11.66% and ranks in the 94th percentile of readings taken over the last 12-months, though this is estimated to result in a mere 41-pip move. AUDJPY is expected to be the most active Australian Dollar currency pair judging by its overnight implied volatility reading of 12.52%, which ranks in the 89th percentile of recent measures, but could be underpriced and push the popular forex carry trade pair above the upper bound of the 1-standard deviation implied trading range if the RBA shocks markets with a hawkish hold.

A risk reversal reading above zero indicates that the demand for call option volatility (upside protection) exceeds that of put option volatility (downside protection). As such, Australian Dollar overnight risk reversals point to a bearish bias among forex options traders ahead of the October RBA meeting. At the same time, Aussie risk reversals are less bearish on a relative basis when compared to 5-day and 20-day averages. The IG Client Sentiment report also provides insight on the change in retail forex trader positioning and their bullish or bearish biases, which is available for free and updated in real-time. 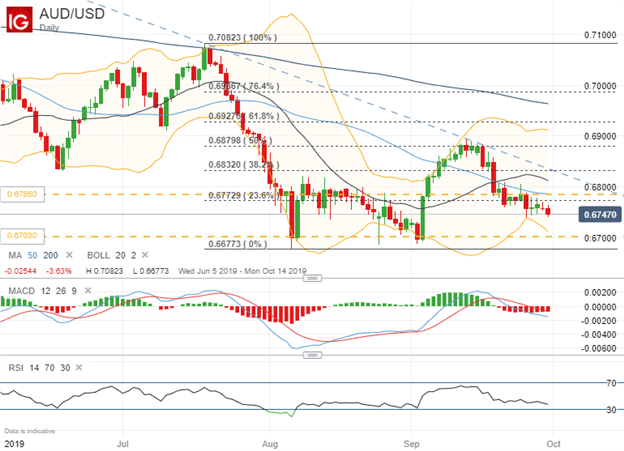 AUDUSD price action is estimated to fluctuate between 0.6703-0.6785 with a 68% statistical probability judging by overnight implied volatility of 11.66%. This options-implied trading range aligns closely with key technical levels underpinned by the 23.6% Fibonacci retracement of the Australian Dollar’s bearish leg since late July and the currency pair’s year-to-date low. AUDUSD’s 50-day simple moving average could keep upside anchored whereas the triple bottom support around the 0.6700 handle could provide a strong degree of buoyancy for the Aussie.