USD/MXN: Mexican Peso Primed for Banxico Rate Cut, What Next?

The Mexican Peso will likely be in focus during Thursday’s trading session with Banxico – Mexico’s central bank – set to release its latest interest rate decision and monetary policy update at 18:00 GMT. Mexico’s policy interest rate currently sits at 8.00% after the August Banxico meeting revealed a 25-basis point cut and the market consensus calls for another rate cut to be announced tomorrow.

I pointed out at the end of July that USDMXN rate outlook hinted at higher spot prices back when the Mexican Peso was trading around 19.030 against the US Dollar. USDMXN subsequently surged well above the 20.000 handle as the most liquid emerging market currency pair was driven higher by gains in the greenback, which solidified a topside breakout from its multi-year wedge. Spot USDMXN prices have since receded back toward the 19.500 mark, however, though the Mexican Peso could soon face renewed selling pressure if Banxico favors more aggressive monetary policy action. 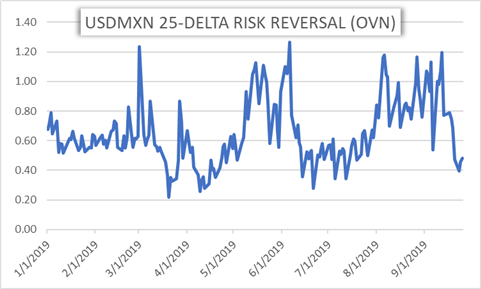 Yet, according to USDMXN risk reversals, which have declined significantly since the beginning of the month, point to the fading bullish bias by forex traders headed into the September Banxico rate decision. Some USDMXN bears argue that the recent jump higher in oil prices – sparked largely by Middle East supply shocks – boosts the feasibility of Mexico President AMLO’s aggressive 2020 budget plan, which assumes oil output from state-run Pemex will surge by 17% to boost government revenues.

Conversely, several uncertainties remain regarding the ratification of the long-awaited USMCA trade deal and doubts over its formal approval may soon reemerge. Also, the latest OECD economic outlook report detailed a whopping 1.1% slash to its forecast for 2019 Mexico GDP growth, which is now expected to come in at a sluggish 0.5% annual rate. 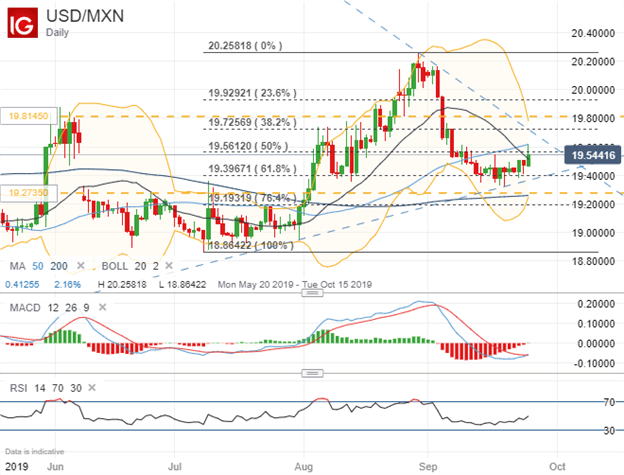 Judging by USDMXN overnight implied volatility of 10.0%, spot prices are estimated to fluctuate between 19.274-19.815 with a 68% statistical probability. If implied volatility is correctly priced – meaning that realized volatility matches expected (implied) volatility – spot USDMXN should breach the recently formed wedge between rising and falling trendlines noted above.

The MACD and RSI indicators speak to fading selling pressure, but the 50-day SMA appears to be keeping a lid on further upside progression. That said, USDMXN downside could be short-lived if Banxico shocks markets with a surprise hold as technical confluence around the 19.400 handle in addition to the currency pair’s 200-day SMA will look to keep spot prices afloat.