The DXY Index, a popular bundle of US Dollar currency pairs, remains anchored to its choppy trading range between 98.00-98.50 while forex traders anxiously await monetary policy updates from two of the world’s largest central banks. The DXY Index stands to be impacted by EURUSD in particular seeing that it comprises a hefty 57.6% of the benchmark’s total composition.As such, US Dollar price action so far this week, on balance, is characteristic in light of the September ECB meeting that looms as markets speculate over its upcoming interest rate decision this Thursday. 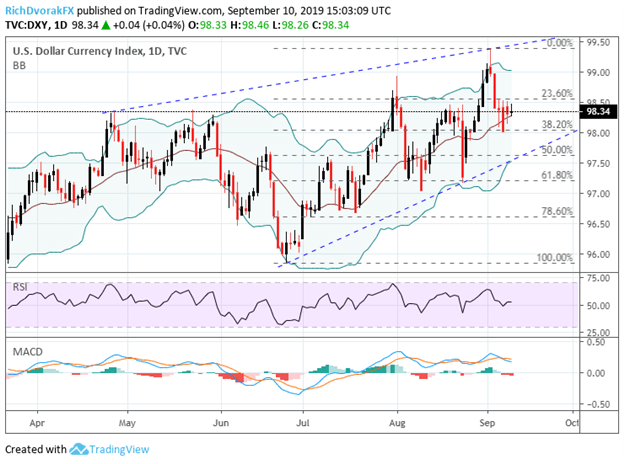 We noted in yesterday’s US Dollar price volatility report that the DXY Index seems to be clinging onto its 20-day simple moving average while fluctuating between the 38.2% and 23.6% Fibonacci retracement levels extended from its June 25 low to September 03 high. The US Dollar Index may find a bit of buoyancy in the short-term if technical resistance previously identified by the swing highs printed back in late April and middle of May around this price level serves as confluent support going forward. One concerning aspect of the US Dollar’s technical backdrop is the MACD indicator, however, which appears to suggest that the DXY Index could soon witness a bearish reversal.

With the serious market impact threatened by the upcoming ECB meeting this week and Fed meeting next week, a jump in EURUSD implied volatility is to be expected. Judging by its 1-week implied volatility of 6.56%, EURUSD is expected to be particularly volatile relative to other major US Dollar currency pairs as its latest measurement falls in the top 70th percentile of readings over the last 12-months. Although, EURUSD 1-week implied volatility has potential to still creep higher seeing that the September Fed meeting is just a day shy of being one week away. Nonetheless, the US Dollar could benefit from a slide in the Euro if the ECB matches or exceeds market expectations for a robust monetary stimulus package.

The dovish call for ECB stimulus to shore up the Eurozone’s quickly deteriorating economy has recently been hinted at by some of the central bank’s officials, but was subsequently met by mixed opinions on the matter. If the ECB shocks traders with a firm monetary policy update, this relatively hawkish scenario stands to spark bearish US Dollar price action and cannot be overlooked considering ECB President Mario Draghi’s tenure is nearing its end. With the head central banker halfway out the door, it may render a lower likelihood that the ECB commits to aggressive policy action. At the same time, markets could be in store for another infamously dovish Draghi speech – similar to the tune of his remarks back in July 2012 where he stated the central bank “is ready to do whatever it takes to preserve the Euro.” 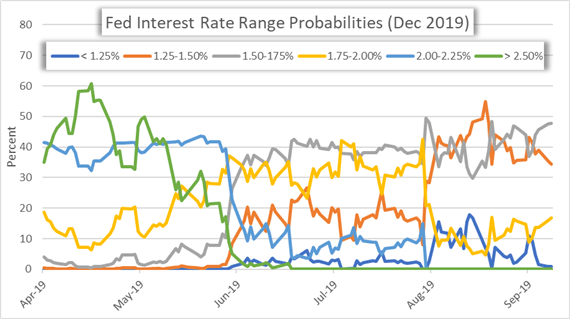 Shifting focus to the latter half of the EURUSD equation, the US Dollar faces its own fair share of high-impact event risk over the coming days prior to the September FOMC meeting next Wednesday. Accordingly, EURUSD price action could whipsaw or be exacerbated as forthcoming ECB and Federal Reserve interest rate decisions unfold. While equity markets and risk assets alike have experienced quite a bit of volatility around US-China trade war headlines, so too have traders’ expectations for Federal Reserve interest rate cuts.

With the Fed currently under a blackout period restricting FOMC members from commenting publicly on economic developments a week prior to a policy meeting, markets will likely take cue from US inflation and consumer sentiment data on deck for release Thursday at 12:30 GMT and Friday at 14:00 GMT respectively. According to the latest overnight swaps pricing pulled from Bloomberg, there is a 95.5% probability that the FOMC reduces its target interest rate range by 25-basis points at next week’s meeting. Furthermore, there is currently a 47.8% probability that the Fed cuts rates by 50-basis points before the end of the year. Thus, US Dollar price action is anticipated to respond predominantly to the September ECB meeting and Federal Reserve interest rate cut expectations over the next week. 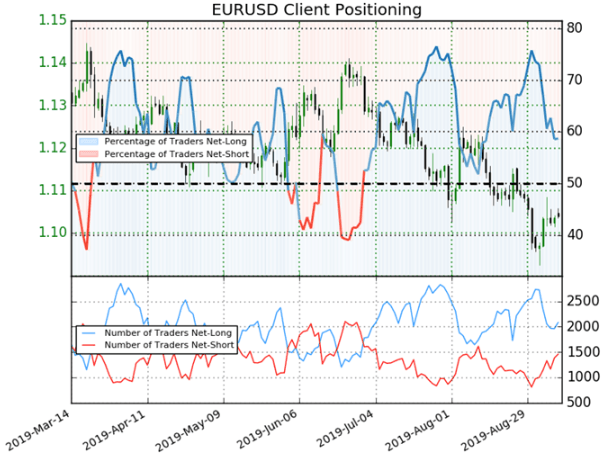 On another note, EURUSD retail trader positioning has grown increasingly bearish since the start of September judging by the latest IG Client Sentiment data despite 58.7% of traders remaining net-long . In fact, the number of traders net-long is 21.6% lower while the number of traders net-short is 55.1% higher compared to last week’s readings. This theme of Euro bearishness relative to the US Dollar is also conveyed in the latest CoT speculative positioning report as markets, on balance, prepare for a dovish ECB later this week. As such, seeing that we typically view crowd sentiment through a contrarian lens, recent changes in retail client positioning suggests that the recent spot EURUSD price trend may soon reverse higher.