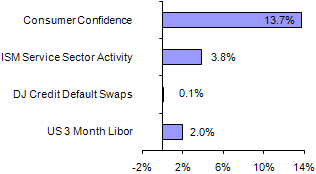 While the dollar can find a temporary, favorable wind through many different fundamental and speculative sources; a serious and lasting advance from the greenback can only truly be generated via a few catalysts. What makes the dollar’s medium-term outlook seem particularly dubious is that those encouraging factors are either far off into the distance or contradict the current trends in the broader market. With the pressure of a 10-year, progressive decline for the benchmark currency (owing to the gradual diversification of reserve and risk-free funds); the most prolific fundamental advance the dollar could muster would be as a global leader for returns in both economic growth and asset returns. Given the healthy 3.2 percent pace of annualized growth reported for the fourth quarter and the IMF’s 2011 forecasts, it would seem the US is well positioned in this regard; but persistently high unemployment and the temporary stop-gap of stimulus funds represent a hurdle to true economic strength. What’s more, the Fed’s maintenance of QE suggests benchmark rates will be held low through much of the year, which in turn will keep foundation for rates of return depressed as well. Better potential (though less impact) for the dollar would be a meaningful drop in risk appetite that caters to the currency’s safe haven role. Investor sentiment seemed to waver a few times these past couple of weeks; but government support and market participants’ confidence in stability have held back the tide. However, with each week that passes without a cleansing correction, the greater the risk of just such an event. 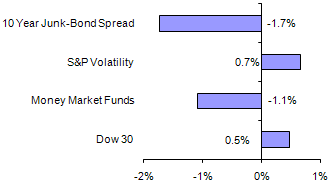 The capital markets – and the sentiment behind them – seem to have recovered quickly from last Friday’s slip. The divide between blind speculation and economic performance is not very clear at this point; and the ambiguity of the latter is propping up the health of the former. With headline readings like those seen with the fourth quarter GDP reading and January jobless rate, it is easy to overlook the financial risks of pushing assets higher. However, the outlook for revenues, dividends and yields simply does not reconcile with the expectations derived from the relentless climb in capital markets. It isn’t difficult to call up an example of what happens when prices swell beyond what natural returns can support. The most poignant example is the 2007-2009 financial crisis. It is easy to simply disregard such a comparison between now and then; but the conditions are very similar. The overabundance of debt and the inability to sustain its necessary payments simply met an overdue reality check form market participants. What has changed now? Leverage has not really been reduced, it has simply been transferred from one player to another (the investor and consumer to the government). Eventually, these liabilities will be transferred back to their owners or there will be more turmoil like what was seen in the EU or preliminarily with China. Another concerns that should not be overlooked is global inflation. While many central banks believe there isn’t enough price growth to hike rates, there is enough to cut revenue. 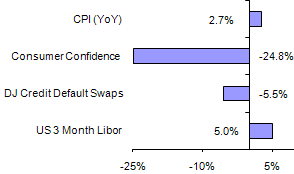 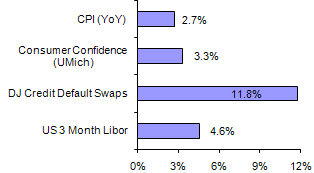 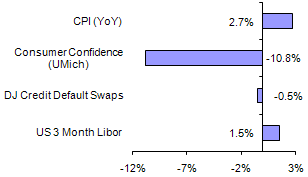 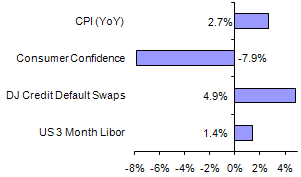