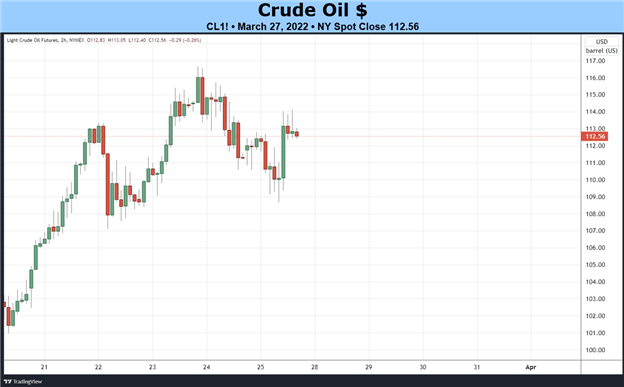 Volatility in energy markets is a feature of current trading conditions and likely won’t dissipate anytime soon. Having already traded in a 38% range over the past four weeks, crude oil prices swung higher last week, adding +10.5% to its second highest close of the year at 112.56/brl. Brent oil gained +17%, posting its highest close of 2022 and its highest since April 2012 at 120.21/brl. Elsewhere, natural gas prices tallied their highest close of 2022 and their highest since the end of September 2021 at 5.571 MMBtu, a gain of +14.6%.

There are a litany of factors that are feeding into volatility across energy markets. The European Union’s proposed ban on Russian oil imports in response to the ongoing invasion of Ukraine has spurred concerns of even more constrained global energy supplies, to which OPEC has already warned against. Canadian officials have suggested that the country is able and willing to increase energy production to offset Russian supply losses, but questions remain over how quickly such a goal could be accomplished.

A new Iran nuclear deal may be on the verge of being completed, but given how long rumors have persisted that a deal was close to the finish line, one has to imagine that new oil supplies coming onto the market have more or less been priced-in already. Attacks on Saudi Arabian oil distribution facilities are doing no favors for quelling concerns that energy supplies are on stable footing, either.

The fact of the matter is that there are several stories unfolding in the energy space that could easily provoke more volatility across markets, none of which are likely to find any permanent resolution anytime soon.

The final week of March sees a generally lighter economic calendar from the world’s major economies, but several inflation reports will underscore the impact that higher energy prices are having on sustained higher price pressures around the globe. As is the case every week, and particularly of recent, mid-week energy inventories figures should prove among the most impactful for crude oil prices – beyond the headlines du jour. 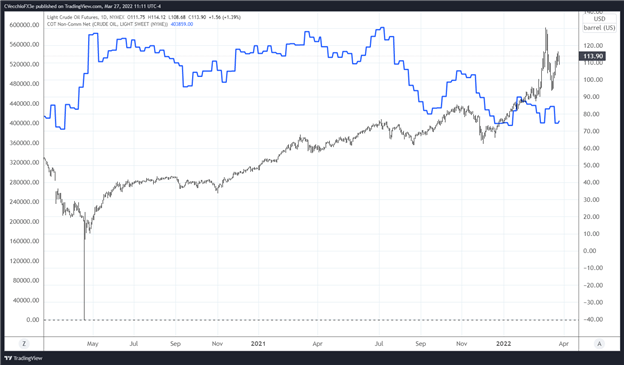 Next, a look at positioning in the futures market. According to the CFTC’s COT data, for the week ended March 22, speculators increased their net-long oil futures position to 403,859 contracts, up from the 399,892 net-long contracts held in the week prior. Despite the volatility in energy prices – and in particular, the rapid gains seen – speculators have not increased their net-long positioning dramatically; net-longs are -32% below their high in July 2021. 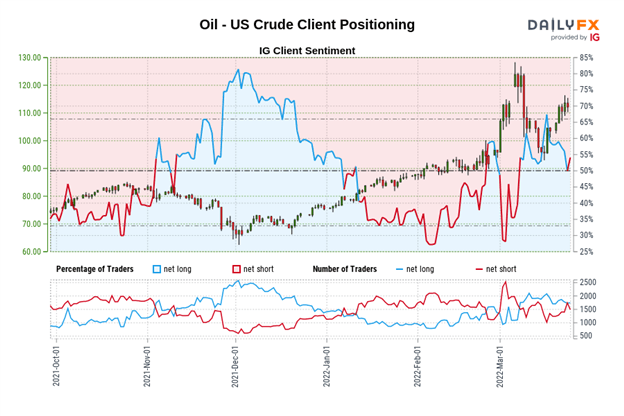 Traders are further net-short than yesterday and last week, and the combination of current sentiment and recent changes gives us a stronger Oil - US Crude-bullish contrarian trading bias.