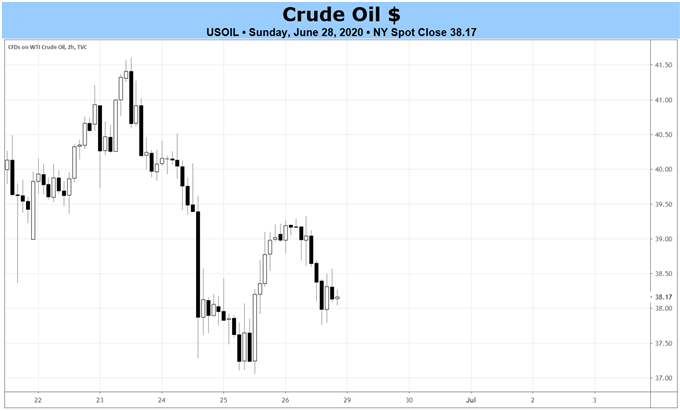 - As coronavirus pandemic fears resurface – did they ever subside? – assets that track global growth conditions have started to pullback.- Neither Brent oil nor crude oil has been able to rally back to the levels seen prior to the coronavirus pandemic outbreak at the start of March.

Energy markets pulled back last week, their second loss in three weeks and only the second weekly loss since the second to last week of April. Amid signs that that the world’s largest economy is reeling from the pandemic, energy markets have taken a step back after a considerable rally in recent weeks. While The Great Lockdown’s impact on the global economy has provoked the world’s major producers to cut production, it still holds that fears of sluggish growth could weigh on energy markets, regardless of near-term supply shifts. Crude oil prices lost -3.16% last week while Brent oil prices fell by -2.86%.

The end of the second quarter and start of July coincides with a US holiday at the end of the week, causing a compressed economic calendar. Both the US initial jobless claims and nonfarm payrolls reports will be released on Thursday, July 2 at 08:30 GMT, likely leading to a spike in volatility across markets, if only temporarily.

Beyond the US, however, major data releases are thin: the final Q1’20 UK GDP report is due on Tuesday, June 30, but given the and time lag in the reporting period, and how markets are increasingly sensitive to more timely in hopes of finding clues about the progress towards lifting the veil of The Great Lockdown, it seems unlikely that there will be a significant imprint on energy markets by the economic calendar this week.

Of course, given the changing nature of energy production and demand as the global economy emerges from The Great Lockdown, we’ll want to keep on the EIA inventory data due to be released at 14:30 GMT on Wednesday, July 1. The data will reinforce the notion that we’re in the beginning innings of a long ballgame where there will be persistent supply-demand deficits – for the next several quarters, if not years. 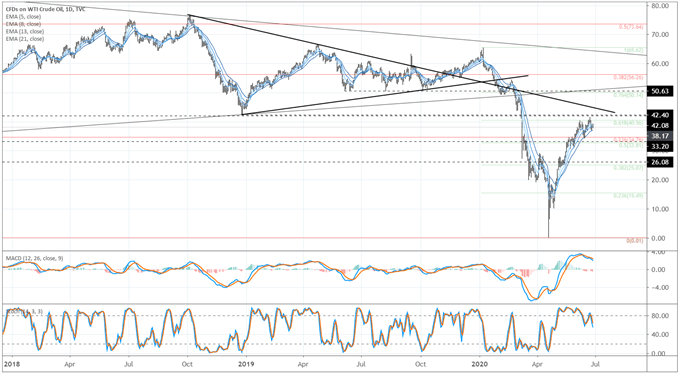 On the USOIL CFD contract, the low established during the May WTI contract moving into negative territory was 0. To this end, the Fibonacci retracement taken from the 2020 high at 65.62 to the contract low at 0 suggests that crude oil prices are trading between the 50% retracement (32.81) and the 61.8% retracement (40.56) of the 2020 trading range.

Besides from another important Fibonacci retracement, crude oil prices will need to contend with several important swing lows established over the past decade, including the 2018 low at 42.40. On approach to these key levels, momentum has started to fade: daily MACD has been slowing losing altitude in bullish territory; and Slow Stochastics have dropped out of overbought territory. 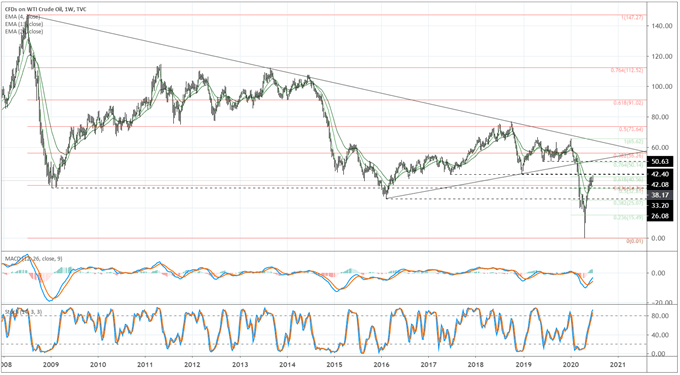 The longer-term chart of the USOIL CFD contract shows an impressive recovery from the coronavirus pandemic lows, but still suggests that technical difficulties remain. The losses around the coronavirus pandemic saw the 11-year symmetrical triangle yield a downside breakout, and crude oil prices have only recently started to recover in a meaningful manner. Marking a Fibonacci retracement using the high (2011) and low (2020) of the past decade, the 23.6% retracement of the USOIL CFD comes in at 34.76 – a level that has been cleared and sustained throughout June.

It now appears that a meaningful sideways range has been carved out: with support coming in at the aforementioned 23.6% retracement, as well as the former 2018 yearly low at 42.40: neutrality between these levels may be appropriate for traders; bulls would be well-suited above 42.40; and bears would be more comfortable if 34.76 was lost anew. 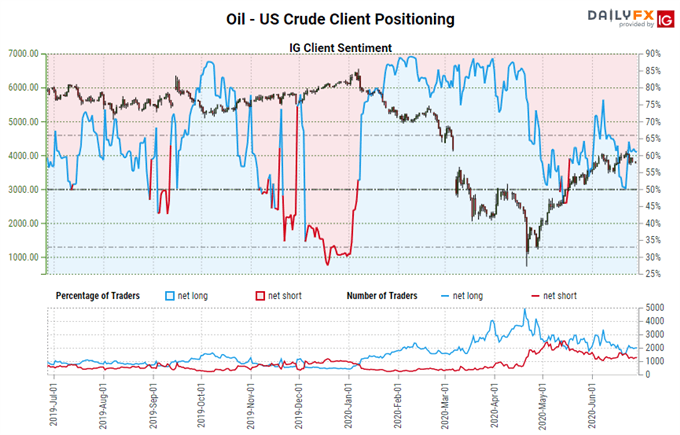 Finally, looking at positioning, according to the CFTC’s COT for the week ending June 23, speculators sharply decreased their net-long Crude Oil positions to 560.9K contracts, slightly up from the 546.3K net-long contracts held in the week prior. Crude oil net-long positioning remains far below the highs seen over the past two and a half years, when 739.1K net-longs were held during the week ending February 6, 2018.