The Scary Fed Number Everyone is Talking About

‘To taper or not to taper? That is the question!’ Or is it? While there appears to be a nuanced, public debate occurring about whether or not the Federal Reserve should remove its stimulus and along what timeframe, it appears that the taper efforts have already begun.

Should traders be worried? The answer might be both yes and no.

What is a Repo? What’s a Reverse Repo?

Here are the technical definitions, per the New York Fed. “In a repo transaction, the Desk purchases Treasury, agency debt, or agency mortgage-backed securities (MBS) from a counterparty subject to an agreement to resell the securities at a later date…repo transactions temporarily increase the quantity of reserve balances in the banking system.”

“High reverse repo volumes? No problem here! As a simple heuristic, if the Fed uses repos to implement its QE program, thereby bringing liquidity to financial markets, then high reverse repo volumes could be interpretated as a taper. And that’s a good thing! The system is well-capitalized, and high reverse repo volumes are evidence that the US economy has weathered the pandemic. This is a feature, not a bug, of the Fed’s pandemic era policies, and should be expected as normalization comes. No assets are mispriced.”

Perspective #2 – Cause for Concern

“High reverse repo volumes? This is cause for concern! This means prime brokers and certain other qualified entities are flush with capital and need a place to park it. The financial system is drowning in liquidity – this is the reason why commodities have been rallying so sharpy this year. This liquidity has contributed to high inflation, which looks more than transitory. If we saw a ‘taperless tantrum’ earlier this year, now we’re seeing a ‘tantrumless taper’. US Treasury yields are mispriced and should be higher.” 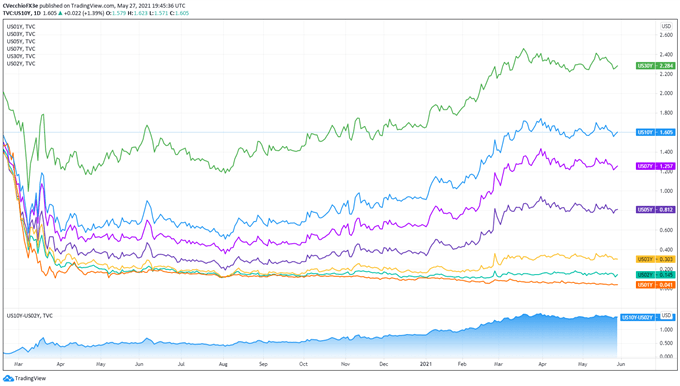 Considering various Fed officials have been teasing about a timeline for taper talk, the volume of RRP is worth monitoring heading into the June Fed meeting – but that’s about it. Financial markets are barely reacting to the liquidity drain: the DXY Index is trading at the same levels it was this time last week; the US Treasury 10-year yield has been bounding in the same place for the past two-months. 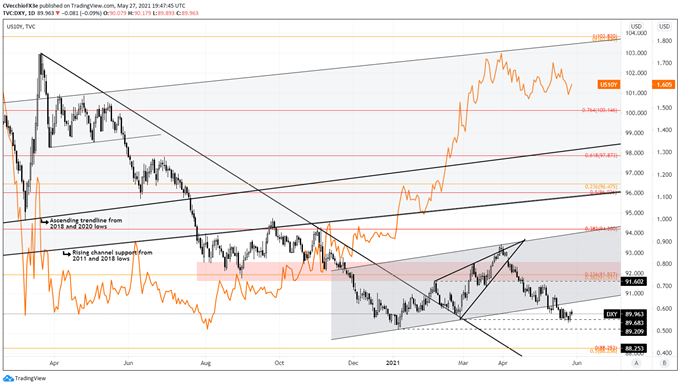 But if taper fears snowball, resulting in a kick higher in US Treasury yields, we could enter a similar trading environment akin to March, when rising yields spooked equity markets, helping the US Dollar produce a counter-trend rally amidst long-term bearish technical considerations.