Now that the “race to the bottom” for central banks has begun as the US-China trade war weighs more heavily on global economic growth, the Federal Reserve’s Economic Policy Symposium in Jackson Hole, Wyoming carries additional weight for market participants.

With European Central Bank President Mario Draghi staying home as he winds down the final months of his term, all eyes are squarely focused on Fed Chair Jerome Powell’s speech at 10 EDT/14 GMT on Friday, August 23.

The July Fed meeting minutes indicated that the FOMC isn’t ready to aggressively cut interest rates. Based on recent moves in bond and rates markets, it appears that traders are already fully aware of the possibility of a less aggressive Fed rate cut cycle than what was previously expected a few months ago.

With the US-China trade war in a state of détente, US Treasury yields have risen as market participants have lowered expectations for an aggressive Fed rate cut cycle. Indeed, much of financial media has been talking about the 2s10s spread and its flirtation with inversion territory in recent days. 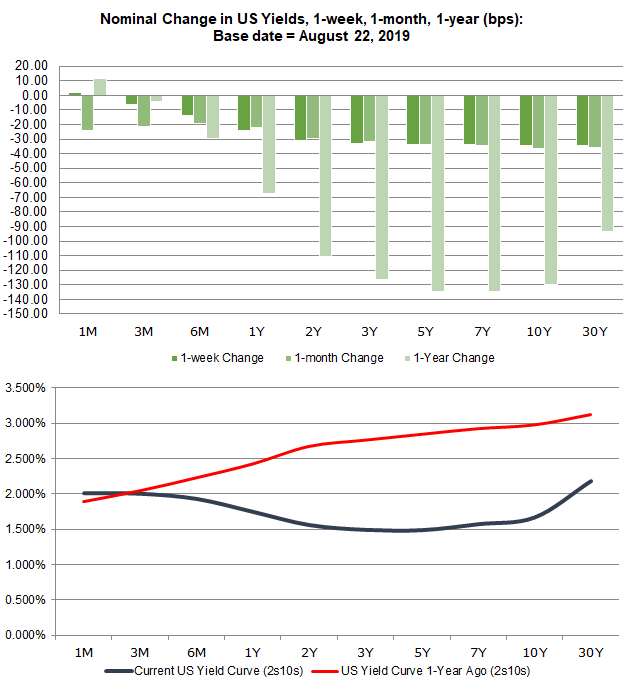 While the 2s10s spread has flirted with inversion over the past week, the two key spreads of the US Treasury yield curve – the 3m5s and 3m10s – have been inverted for several weeks now. In turn, US recession odds are rising. The key question at the Fed’s Jackson Hole summit isn’t “will the Fed cut rates in September?”, but rather “by how much will the Fed cut rates in September?”

The Fed Rate Cut Cycle Will Not Be Aggressive 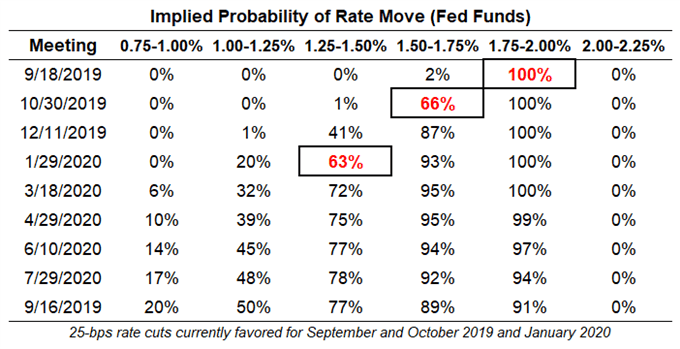 It is worth noting that there is only a 2% chance of a 50-bps cut at the September Fed meeting. If Fed Chair Powell fails to strike an overtly dovish tone during his Jackson Hole speech – one that would indicate 50-bps of rate cuts are coming in September – markets won’t be surprised.

Eurodollar contracts are not as aggressive in their dovish pricing as the Fed rate cut cycle has begun. We can measure whether a rate cut is being priced-in using Eurodollar contracts by examining the difference in borrowing costs for commercial banks over a specific time horizon in the future. 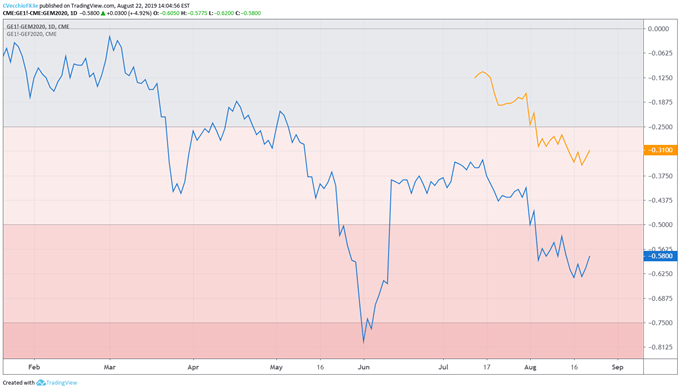 Based on the Eurodollar contract spreads, a 25-bps rate cut is fully discounted at the September Fed meeting. There is only a 24% chance of seeing two 25-bps rate through the end of 2019 and a 32% chance of three more 25-bps rate cuts coming by June 2020.

This point bears repeating time and again. Traders should continue to appreciate the fact that if Fed rate cuts are coming, they’re going to come over the next several months, a direct response to the growing threat of the US-China trade war. It thus stands to reason that if a US-China trade deal materializes at any point in time there will be a repricing of Fed rate cut odds in favor of a stronger US Dollar. 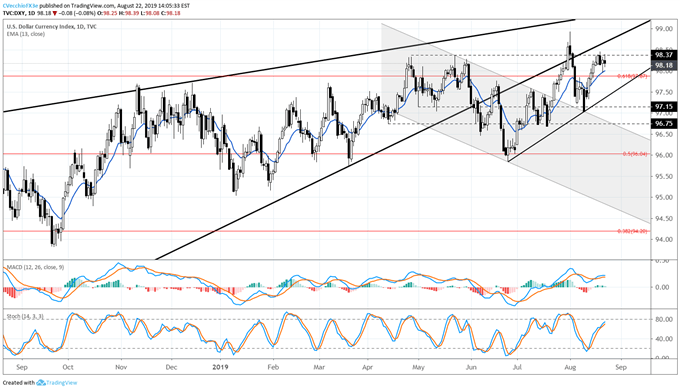 For the US Dollar (via the DXY Index), the rebound from the uptrend from the June and July swing lows has been maintained, neutralizing bearish momentum that developed at the start of August. But price action has continued to firm up, and as a result of the DXY Index’s momentum profile has turned more bullish. Price is trading above its daily 8-, 13-, and 21-EMA envelope, daily MACD is trending higher in bullish territory, and Slow Stochastics are now above below its median line. Yet there has been a clear lack of directional movement ahead of the Fed’s Jackson Hole summit.