Weeks of turmoil on the US-China trade war front have provoked significant volatility in Fed interest rate cut odds, and in turn, the US Dollar (via the DXY Index). But with US economic data improving in recent weeks – the Citi Economic Surprise Index for the US has improved to -40.6, its highest level since the first week of June – calls for aggressive dovish policy action have been quieted.

Prior to the blackout window ahead of the July Fed meeting, FOMC officials laid clear their intentions to lower the main interest rate by 25-bps, and took significant pains to tamp down speculation that 50-bps of cuts would be delivered. The ensuing reaction in Fed rate cut odds pricing is proving to be the fuel the US Dollar needs to find follow through on its break of the downtrend from the May highs. With less than a week until the July Fed meeting, Fed funds futures are pricing in a 100% chance of a 25-bps rate cut and an 18% chance of a 50-bps rate cut in July. 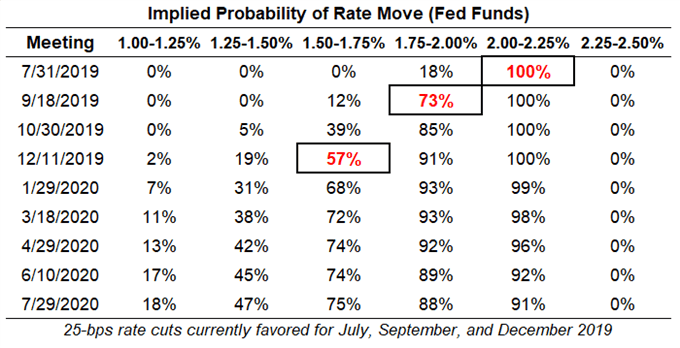 Eurodollar Contract Spreads are Not as Dovish as Fed Funds

Curiously, Eurodollar contracts are much less aggressive in their dovish pricing around the start of the Fed rate cut cycle. We can measure whether a rate cut is being priced-in by examining the difference in borrowing costs for commercial banks over a specific time horizon in the future. The chart below showcases the difference in borrowing costs – the spreads – for the June 19/December 19 (blue), August 19/December 19 (orange), & August 19/June 20 (red) periods in order to gauge where interest rates are headed by the end of December 2019 and the end of June 2020, respectively. 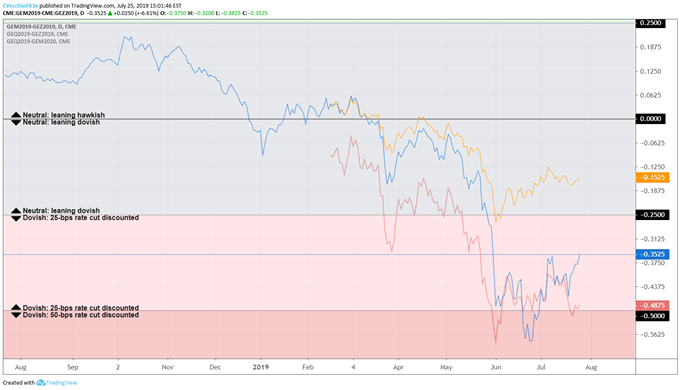 Traders should understand the distinctive way interest rate markets are currently discounting Fed rate cuts: there is a fairly meaningful discrepancy. Fed funds are much more aggressive than Eurodollar contracts in their dovish pricing for the Fed rate cut cycle. Such dissonance typically yields volatility; the July Fed meeting should produce a particularly pronounced market reactions across asset classes.

Moreover, it’s worth repeating an observation from several weeks ago. Markets feel that if Fed rate cuts are coming, they’re going to come over the next several months, a direct response to the growing threat of the US-China trade war. It thus stands to reason that if a US-China trade deal materializes at any point in time, there will be a violent repricing of Fed rate cut odds. 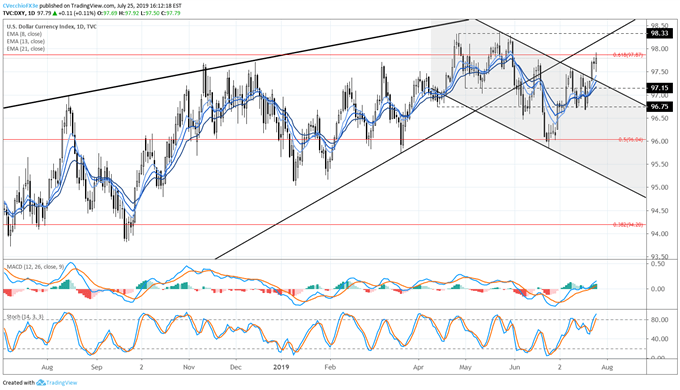 As Fed rate cut odds have dropped, the US Dollar (via the DXY Index) has been able to find follow through on the breakout above downward sloping channel in place since May. Bullish momentum appears to be building, with price holding above the daily 8-, 13-, and 21-EMA envelope. Meanwhile, daily MACD is attempting to extend its advance above the signal line in bullish territory, while Slow Stochastics extend their advance into overbought territory – typically the sign of a strong market. Considering the bullish outside engulfing bar, the US Dollar’s near-term bias has turned more bullish.A return back towards two-month resistance near 98.33 should not be ruled out, particularly if Fed rate cut odds continue to recede.