Federal Reserve Chair Jerome Powell is on Capitol Hill on Wednesday and Thursday giving his semi-annual testimony to Congress. Kicking off in the House of Representatives in front of the House Financial Services Committee today, Fed Chair Powell laid the groundwork for a series of interest rate cuts over the coming months. Saying that “uncertainties since [the] June FOMC continue to dim [the economic] outlook,” it’s clear that a lack of progress in the US-China trade war talks is about to provoke Fed Chair Powell and the FOMC into a formal shift in monetary policy.

In an earlier update, we reviewed the different methods that the various major central banks could respond to the growing threat of trade wars. “For central banks like the Federal Reserve or European Central Bank, there is too much global reliance on the stability of asset prices in order to dramatically surprise market participants. Instead, these central banks move at a more glacial pace…if the Fed is going to get involved in trade wars, then it is highly likely that it will do so along the interest rate route.” If a Fed rate cut as a direct result of the US-China trade war was in question, it should be fully answered today. 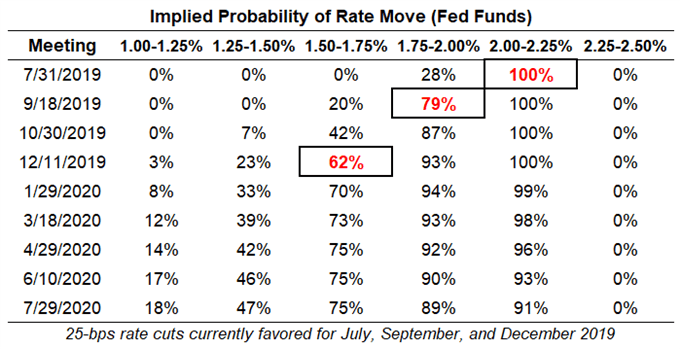 Not dissimilar, Eurodollar contracts turned aggressively dovish in their pricing around Fed Chair Powell’s testimony on Wednesday. We can measure whether a rate cut is being priced-in by examining the difference in borrowing costs for commercial banks over a specific time horizon in the future. The chart below showcases the difference in borrowing costs – the spreads – for the June 19/December 19 (orange) and June 19/June 20 (blue) periods in order to gauge where interest rates are headed by the end of December 2019 and the end of June 2020, respectively. 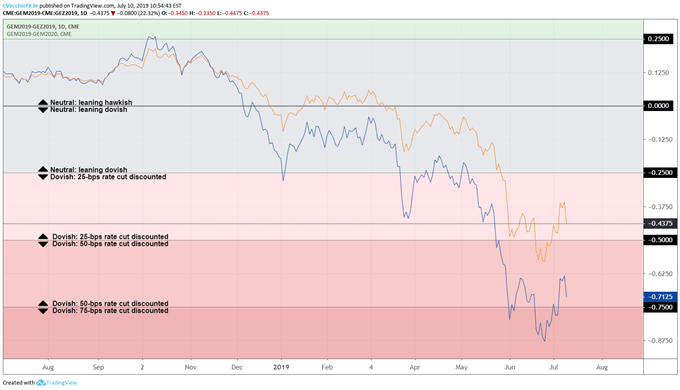 Eurodollar contract spreads are quickly shifting back to pricing in two 25-bps rate cuts by December 2019 and a third 25-bps rate cut by June 2020; there are -44-bps discounted through December 2019 and -71-bps discounted through June 2020. The sharp rise in Fed rate cut odds around Fed Chair Powell’s congressional testimony has proved to undercut US Treasury yields and the US Dollar in one fell swoop.

It’s worth repeating an observation from three weeks ago. Traders should appreciate the idiosyncratic way interest rate markets are currently discounting Fed rate cuts: the rate cuts are extremely frontloaded. That’s to say that markets feel that if Fed rate cuts are coming, they’re going to come quickly over the next several months, a direct response to the growing threat of the US-China trade war. It thus stands to reason that if a US-China trade deal materializes at any point in time, there will be a violent repricing of Fed rate cut odds. 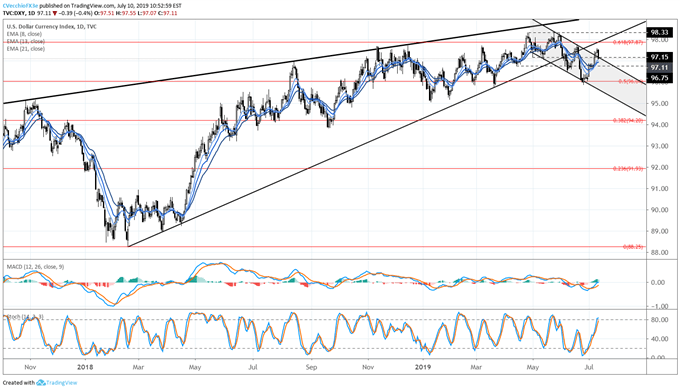 With Fed rate cut odds climbing again, the US Dollar (via the DXY Index) has been knocked lower, keeping the threat of a major US Dollar top in place. While the DXY Index has traded in a downward sloping channel since the start of May, the downtrend appeared to show signs of breaking this week. However, with today’s price action, the DXY Index may be squaring up a ‘false bullish breakout,’ keeping the longer-term bearish perspective rooted in the bearish rising wedge dating back to the February and March 2018 lows intact. The US Dollar’s near-term bias is neutral until more technical clarity is achieved; the budding bullish momentum appears to have been stopped in its tracks today.