- With the G20 summit in Osaka, Japan this weekend, Fed funds have steadied around an implied 62% probability of three 25-bps interest rate cuts this year.

- The Reserve Bank of Australia is very likely to cut its main interest rate this week as domestic pressures building in the housing market.

The past month has produced seismic shifts in interest rate pricing for the rest of 2019. With the US-China trade war beginning to become a veritable albatross around the neck of global growth, central banks have started to take more concrete steps to loosen monetary policy. June 2019 may be remembered as the official turning point in Federal Reserve policy, as well as the point in time that outgoing European Central Bank President Mario Draghi’s dream of beginning the interest normalization process finally died.

With the G20 summit in Osaka, Japan this weekend, interest rate markets have steadied over the past week. The prospect of a deal emerging from the meeting between US President Donald Trump and Chinese President Xi Jingping is proving to be enough of a threat to the immediacy of a Fed rate cut. In turn, Fed interest rate cut odds have stopped rising: the odds of three 25-bps rate cuts in 2019 have fallen from 63% to 62% over the past week. 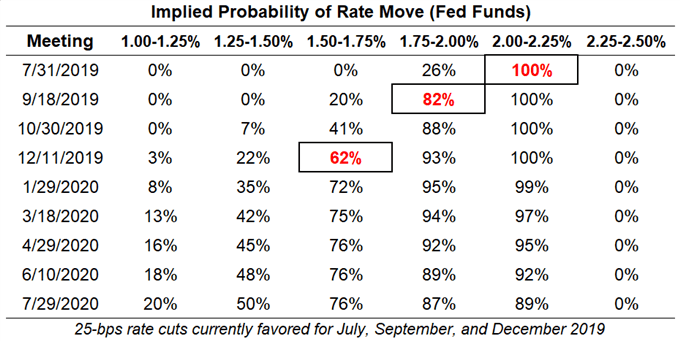 While it appears that the odds of a deal emerging from the US-China discussions this weekend are low, should one materialize, it’s easy to envision interest rates markets overreacting over the next few days and aggressively reducing the expectation for Fed rate cuts in the near-term – which would be bad for gold prices and good for the US Dollar.

Australia’s largest two trading partners are engaged in a tit-for-tat trade war that is proving to chill global growth. But Australia itself is not necessarily in the cross-hairs, as neither American nor Chinese tariffs are levied against Australian trade. Nevertheless, perception matters more than reality, and in this case, the slowdown in domestic activity in Australia has coincided with the increasing tensions in the US-China trade war. In particular, the Australian housing market has seen prices slow in recent months.

With central banks positioning their economies to prevent collateral damage from the US-China trade war from spilling over, the RBA is poised to cut its main rate as soon as the July policy meeting this coming week. Overnight index swaps currently peg a 74% chance of a 25-bps rate cut at the July RBA meeting, and there is currently a 58% chance of a 25-bps rate cut in November 2019.

One question has loomed over European Central Bank policy in 2019: will outgoing President Mario Draghi make the same mistake as his predecessor? It was in July 2011 that former ECB President Jean-Claude Trichet haphazardly raised the ECB’s main interest rate, effectively pushing the region deeper into the Eurozone debt crisis that continues to weigh on growth today.

Lesson learned? It seems that way. Despite the indications over the past year that ECB President Draghi wanted to normalize policy before his tenure ended, recent speeches during June have led markets to believe that the ECB is prepping markets for a deposit rate cut at some point over the coming months. 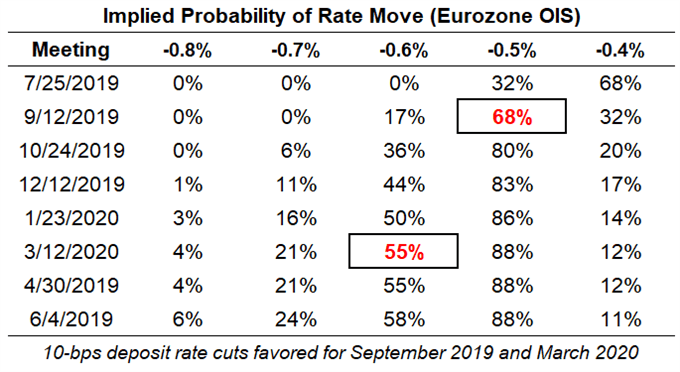 Indeed, overnight index swaps are now pricing in a 68% chance of a 10-bps cut to the deposit rate at the September ECB meeting, at which there will be a new Staff Economic Projections (SEP). Similarly, as the ECB is still in the mode of only acting on policy when there is a new SEP, overnight index swaps are pricing in a 55% chance of another 10-bps deposit rate cut in March 2020.