The past week produced two major central bank meetings: the Federal Reserve on Wednesday and the Bank of England on Thursday. With respect to the latter, the June BOE meeting was as bland as it could come. With the latest Brexit news yielding little progress by way of finding a workable withdrawal agreement as the focus is squarely on the Tory leadership election, the BOE remains sidelined by domestic political factors. But for the former, the June Fed meeting has proved to be of monumental importance to global financial markets.

The Fed is Responding to Trade Wars

In a previous iteration of this note, we explored the various ways that different central banks around the world could respond to the growing threat of trade wars. “For central banks like the Federal Reserve or European Central Bank, there is too much global reliance on the stability of asset prices in order to dramatically surprise market participants. Instead, these central banks move at a more glacial pace…if the Fed is going to get involved in trade wars, then it is highly likely that it will do so along the interest rate route.”

The June Fed meeting produced just that: a response to the US-China trade war via the interest rate route. Dropping the promise to remain “patient” on the next rate move, FOMC policymakers leaned into dovish speculation by market participants that a series of interest rate cuts could be on the verge of transpiring.

With the threat of US-led trade wars accelerating at the start of May, interest rate markets have aggressively discounted dovish Fed action over the next several months. At the start of May, there was a 68% chance of a 25-bps rate cut by the end of the year, according to Fed funds futures, and only one 25-bps rate cut was discounted by June 2020, according to Eurodollar contract spreads. 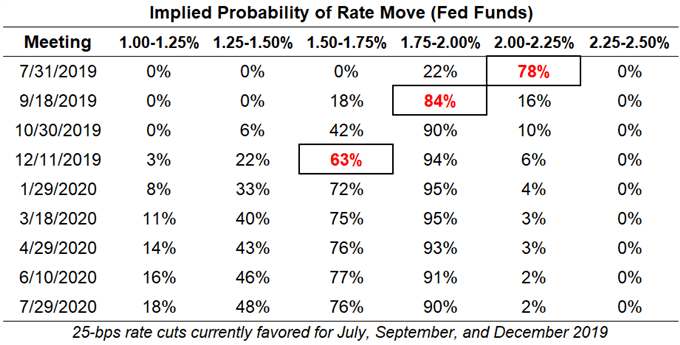 Eurodollar contracts are similarly aggressive in their pricing. We can measure whether a rate cut is being priced-in by this time next year by examining the difference in borrowing costs for commercial banks over a specific time horizon in the future. The chart below showcases the difference in borrowing costs – the spreads – for the June 19/December 19 (orange) and June 19/June 20 (blue) periods. 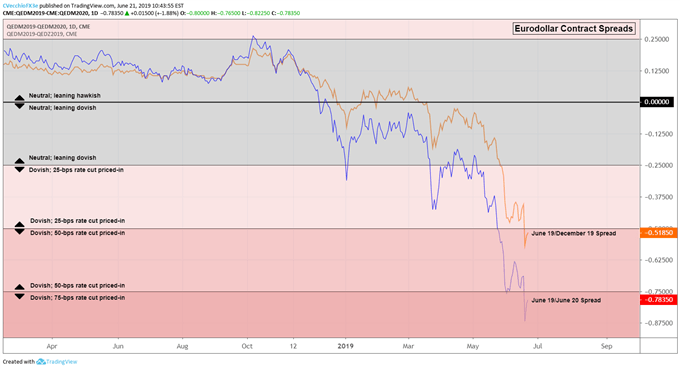 Eurodollar contract spreads are currently indicating that there will be two 25-bps rate cuts by December 2019 and a third 25-bps rate cut by June 2020. This dramatic shift in rate cut odds has been the primary factor driving US Treasury yields lower, in turn feeding into what appears to be major topping potential for the US Dollar (via the DXY Index).

Rate Cut Odds are Frontloaded Due to US-China Trade War

Nevertheless, it’s important to recognize a peculiarity about the way interest rate markets are currently discounting Fed rate cuts: the rate cuts are extremely frontloaded. That’s to say that markets feel that if rate cuts are coming, they’re going to come over the next several months, a direct response to the growing threat of the US-China trade war.

Therefore, traders need to be cautious over the next week. With US President Donald Trump and Chinese President Xi Xingping set to meet at the G20 summit next weekend, there will be meetings ahead of time between diplomats and negotiators to give the two leaders an opportunity to come to an agreement to end the trade dispute. It stands to reason that if a US-China trade deal materializes in the near-term, there will be a violent repricing of Fed rate cut odds.

If the most likely scenario for the Fed is to cut rates two times in 2019, the second most likely scenario may be that there are no rate moves at all. In turn, this disparity in potential outcomes will lead to an environment with increased volatility over the coming weeks and months. 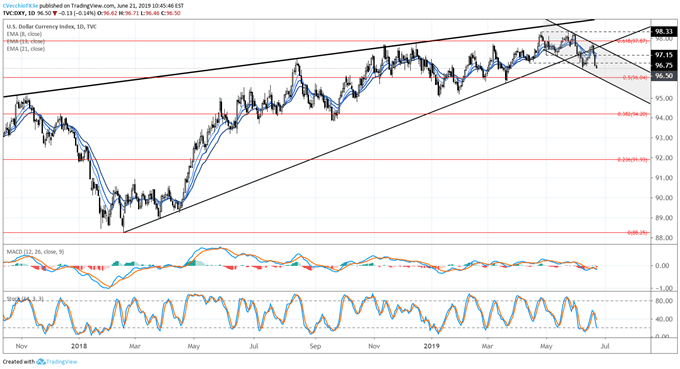 For now, with Fed rate cut odds through the roof, the wheels of a major US Dollar top are still in motion. The bearish rising wedge dating back to the March 2018 lows is seeing follow through to the downside, with the DXY Index evidently in a downward sloping channel since the start of May.

With price below the daily 8-, 13-, and 21-EMA envelope, coupled with the fact that both daily MACD and Slow Stochastics continue to trend lower in bearish territory, it holds that the momentum profile remains bearish for the US Dollar. Losses may extend towards channel support and the 50% retracement of the 2017 high/2018 low range near 96.50 over the coming days. Reversal odds increase with a move above the daily 8-EMA (currently at 96.98).