Looking for longer-term forecasts on the Australian Dollar, Euro, and US Dollar? Check out the DailyFX Trading Guides.

Financial markets have breathed a sigh of relief this week after US President Donald Trump promised to “indefinitely suspend” the threatened tariffs on Mexico. But just because the Mexico tariffs were avoided doesn’t mean that concerns about the global trade environment have died down permanently. The US-China trade war is continuing to simmer away on the backburner after the Trump administration increased tariffs on Chinese goods at the start of June, the proverbial ‘elephant in the room.’

Traders are forward looking by nature, and with the expectation for a long trade war firmly cemented in the collective conscious of the market, central banks have started to signal more accommodative policy measures to help insulate world’s largest economies from collateral damage from the US-China trade war.

Not only are interest rate cuts being priced-in from the Federal Reserve, but also from the Reserve Bank of Australia and Reserve Bank of New Zealand – two countries who find both China and the US among their top five trading partners.

It was just last week that Fed Chair Jerome Powell said that policymakers are now “closely monitoring” the impact of trade developments and that the Fed will “act as appropriate” to help sustain the expansion as it approaches a record 10 years long next month.

These remarks have been widely interpreted that the Fed rate hike cycle is nearing is formal expiration date: rather than holding on rates in 2019 and hiking once in 2020 (per the FOMC’s most recent Summary of Economic Projections at the March rate decision), Fed policymakers will cut interest rates twice by the end of 2019: 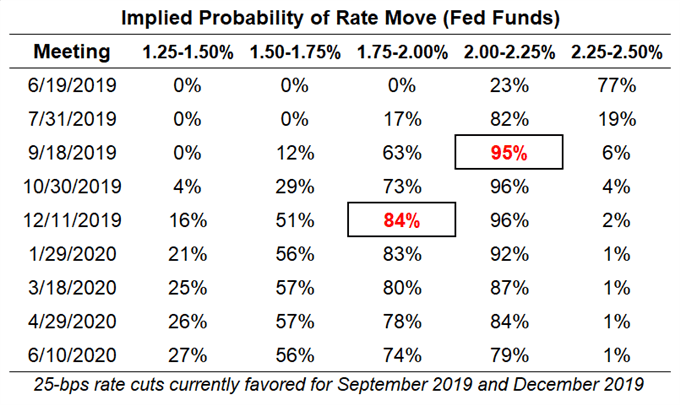 With the Fed in its quiet ‘blackout’ period before its June policy meeting next week, there have been no remarks from Fed Chair Powell or any other Fed policymakers to continue driving dovish rate expectations. The calendar - or lack thereof - is playing just as significant a role as any other factor in helping stabilize rate expectations.

The RBA has already cut its main interest rate once this year, but it may not be done with accommodative policy action. The first 25-bps rate cut came at the June RBA policy meeting, which was largely delayed thanks to the onset of the Australian federal elections.

Clear and free of being labeled politically motivated, RBA policymakers took the opportunity to cut the main interest rate by 25-bps from 1.00% to 1.25%. According to overnight index swaps, this is just the start of an aggressive interest rate cut cycle in 2019.

Per rates markets, there it’s a coin flip if the RBA will cut its main interest rate again in July: there’s exactly a 50% chance of a 25-bps rate cut or a hold. But odds of a 25-bps interest rate cut jump to 78% in August and 82% in September, suggesting that more dovish action is very likely to come down the pipeline before the end of Q3’19.

To this end, should the RBA cut rates once more by October, overnight index swaps are pricing in a 56% chance of a third 25-bps rate cut this year coming in November and a 61% chance of it arriving by the December RBA meeting.

RBNZ Has Cut Once, Likely to Cut At Least Once More

The RBNZ cut its main interest rate at its May meeting, and like the RBA, this may be the start of a more aggressive rate cut cycle in 2019. While no further rate cuts are priced-in for the first half of the year, there are rising odds of more action before the end of Q3’19:

According to overnight index swaps, there is a 56% chance of a 25-bps cut to the main interest rate in August and a 69% chance in September. While overnight index swaps don’t have pricing available through the end of the year for the RBNZ, there is roughly a one-in-three chance of a third and final cut by the November RBNZ meeting, suggesting non-trivial rate cut odds will likely persist through the end the year (once those contracts become active).