Central Bank Weekly: What’s Next for the Fed, ECB, and RBA?

Looking for longer-term forecasts on the Australian Dollar, Euro, and US Dollar? Check out the DailyFX Trading Guides.

With trade wars rising around the globe, central banks have begun to take steps to shore up the world’s largest economies. The first week of June produced two rate decisions from the Reserve Bank of Australia on Tuesday and the European Central Bank on Thursday, and both policy meetings produced the same tone: the economic environment is expected to be weaker over the coming months. Meanwhile, even though the Federal Reserve doesn’t meet until June 18-19, Fed Chair Jerome Powell made clear that the FOMC is taking a more dovish view of the world as well.

Earlier this week, Fed Chair Powell said that policymakers are now “closely monitoring” the impact of trade developments.To this end, as the US recovery approaches 10 years old next month – the longest stretch of economic growth in US history – Fed Chair Powell has also said that the Fed will “act as appropriate” to help sustain the expansion.

Traders have taken these comments as a sign that the Fed’s rate hike cycle is officially done, and rather than holding on rates in 2019 and hiking once in 2020 (per the FOMC’s most recent Summary of Economic Projections), Fed policymakers will act to cut rates twice this year. This has been detrimental for the US Dollar. 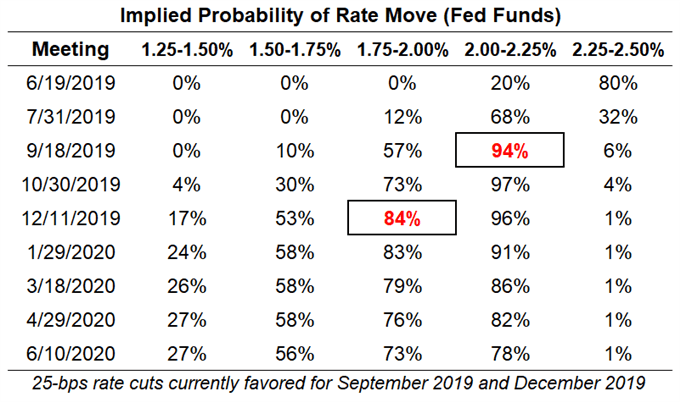 The RBA has been signaling a desire to cut rates for several months now, but has been sidelined thanks to the federal elections last month. The June RBA policy meeting was the first rate decision after the Australian federal elections, and the RBA – now clear and free of being labeled politically motivated – took the opportunity to cut its main rate by 25-bps from 1.00% to 1.25%.

The June ECB meeting came and went without surprising anyone in the slightest. After pre-announcing a third TLTRO program earlier this year, ECB President Mario Draghi used today’s meeting to fill in some of the details – which proved neither too generous or onerous, leaving little room for a surprised market reaction.

Against the backdrop of weak economic growth and soft inflation expectations, ECB President Draghi made clear that interest rates would remain low for the foreseeable future, noting that the current forward guidance on low rates was valid through the first half of 2020 (although, who is he to say that, given his term ends in October 2019?).

Yet, that doesn’t mean more dovish action is coming: the threshold for more stimulus is high as the ECB’s Governing Council sees a “very low probability” of a recession this year. In turn, Euro prices are making an attempt at bottoming.

According to overnight index swaps, the low rate forward guidance has been mostly priced-in, given that there is a low 37% chance of a 10-bps cut to the deposit rate this year (and only a 24% chance before ECB President Draghi’s term ends in October).

Given that a new ECB president may want to shift course, rates markets haven’t completely absorbed the notion that no rate moves are coming in the first half of 2020; there is a 53% chance of a 10-bps cut to the deposit rate in March 2020.