Central Bank Weekly: What Can the Fed, ECB and BOJ do to Offset Trade Wars?

Trade tensions are rising in every corner of the globe. At the center of every issue seems to be the United States, be they issues with China, the European Union, Canada, or Mexico. As the specter of trade wars rises, we’ve started to see policymakers take steps – some concrete, others less so – in order to shore up their economies from downside risks.

Not all central banks are created equally, however, and therefore the tactics that they’ve used, they’re currently using, and they will use in the future will all differ slightly.

The People’s Bank of China is unique relative to G7 or developed economies’ central banks insofar as it does not respect the ‘non-direct FX intervention’ policy followed elsewhere. Accordingly, USDCNH has become one of the most reliable tools for distilling sentiment about the US-China trade war: we’ve previously detailed how a Chinese Yuan depreciation can effectively offset the negative economic impact of the Trump tariffs.

Read more: Chinese Yuan at 7.00 Barrier: The Most Important Level for Currency Markets

Other Degrees of Central Bank Interference

With other central banks bound to no direct intervention in FX markets, policymakers at some of the major central banks need to be creative in how they approach markets.

Due to the soft growth and inflation environment that persists in countries like Japan and Switzerland, for example, market participants are well-versed in the knowledge that interest rates maintained by the Bank of Japan and Swiss National Bank will be staying at or below zero for an extended period.

In turn, surprise actions like what the SNB did with the EURCHF floor in September 2011 and January 2015 tend to be the most effective way to impact markets.

How Will the Fed Respond to Trade Wars?

But for central banks like the Federal Reserve or European Central Bank, there is too much global reliance on the stability of asset prices in order to dramatically surprise market participants. Instead, these central banks move at a more glacial pace: once every three months, new growth, inflation, and jobs forecasts are produced that yield guidance on the forward path of interest rates. Policy is more predictable.

If the Fed is going to get involved in trade wars, then it is highly likely that it will do so along the interest rate route rather than directly intervening in USDCNH like the PBOC or making a surprise policy announcement akin to the BOJ or SNB. To this end, traders would be wise to watch how US rates markets have evolved in recent days as trade war concerns have skyrocketed.

The probability of a rate cut in 2019 has increased in a materially significant over the past week. Ahead of the May Fed meeting, there was a 68% chance of a 25-bps rate cut by the end of the year; now those odds have risen to 91%. In fact, Fed funds futures are pricing in a 71% chance of a cut by September and a 63% chance of a second cut by December. 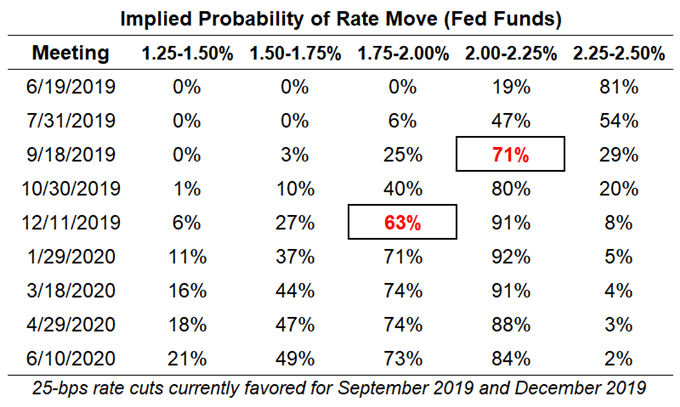 We can measure whether a rate cut is being priced-in by this time next year by examining the difference in borrowing costs for commercial banks over a one-year time horizon in the future. Over the past two weeks, rate expectations have been rapidly pricing in a cut, with rates markets discounting -66-bps by June 2020; this is a 16-bps increase from this time last week. 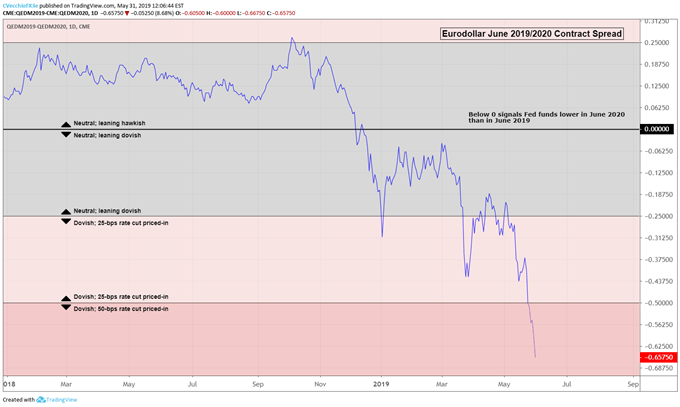 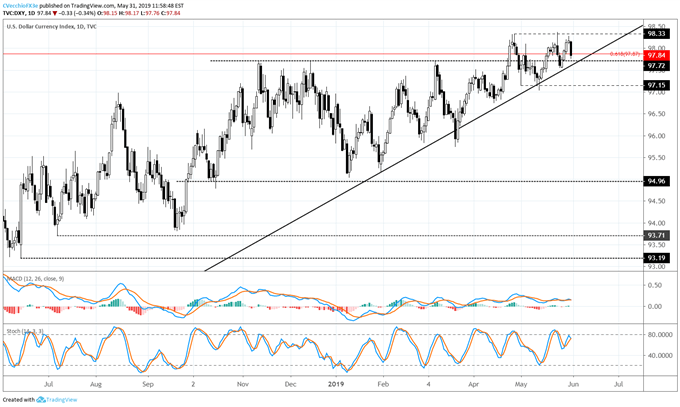 The dramatic shift in Fed rate cut expectations in recent days has proven cumbersome for the US Dollar (via the DXY Index). On approach back to its May and yearly highs, the DXY Index rally has been cut down ahead of resistance and thus price remains in its five-week long sideways range.

The timing of the recent developments comes poorly for the DXY Index, which is now looking a retest of the rising trendline from the March 2018 lows – the backbone of the entire bull move. Should the DXY Index price drop below 97.55 in the coming sessions, odds would increase for a range break some time in June.