Central Bank Weekly: After Fed Meeting, One Cut Priced-In for 2020

- The Fed eliminated the chance of a 25-bps rate hike in 2019, initially knocking the US Dollar lower in the process.

- However, rates markets were already pricing in a 27% chance of a rate cut before the end of the year, and pricing hasn’t become materially more dovish since yesterday.

- Retail traders are shifting into neutral positions across USD-pairs – in EURUSD, GBPUSD, and USDJPY.

The March Fed meeting produced sizeable reactions across global financial markets – Gold prices and US Treasury rates had notable reactions, as did the US Dollar. With Fed Chair Jerome Powell throwing in the towel on a potential rate hike in 2019 – a dramatic departure from the December 2018 Summary of Economic Projections that revealed one to two hikes were possible this year – an initial visceral by markets was almost guaranteed.

Rates Markets Are Not Getting Significantly More Dovish

Less than 24-hours after the FOMC concluded their March gathering, the US Dollar has essentially reversed all of its losses. One needs to look no further than rates markets for the reason why. Prior to yesterday’s Fed meeting, rates markets were pricing in a 27% chance of a 25-bps rate cut before the end of the year.

Now, the odds of a rate cut by December are at 33%. Despite all the fire and fury around yesterday’s Fed meeting, no can objectively say that pricing has changed all that significantly. The Fed has simply arrived at a place where the market has been for many months now – including prior to the 2018 US midterm elections (see section: How Quickly Do Traders Spot Shifting Fed Narrative?).

But it’s not just Fed funds futures that have budged little since yesterday, perhaps underscoring why the US Dollar hasn’t seen further downside, and in fact, reversed higher. We can measure whether or not a rate cut is being priced-in for 2020 by examining the difference in borrowing costs for commercial banks over a one-year time horizon in the future. 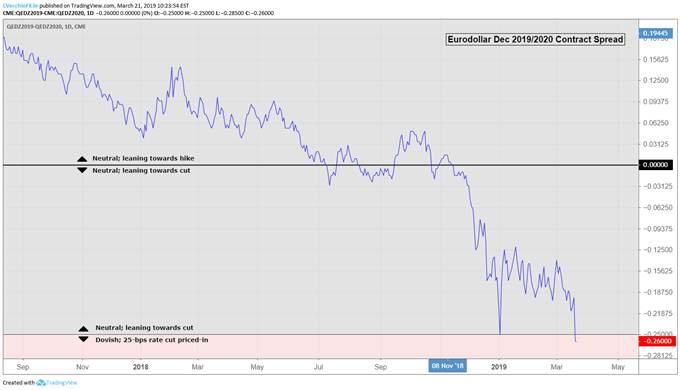 …the Eurodollar December 2019 and 2020 contract spread is flat today, after falling from about -19-bps priced-in to -26-bps priced-in. While it may be true that the period of “patience” dictated by Fed Chair Powell is still being observed, markets are forward looking, and as such, a full rate cut has been priced-in by the end of 2020. But that’s all; there has been no significant follow through today. In a sense, this confirms the pre-FOMC notion that all of that dovishness was essentially priced-in. 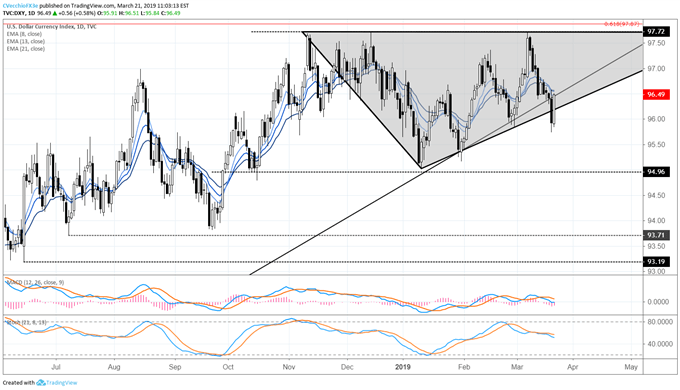 Prior to the Fed meeting, it was noted that “given the pricing of a potential December cut, potential downside opportunities for the US Dollar may be limited.” After the Fed meeting this week, and given the volatile price action seen in the past 24-hours, it seems appropriate that the near-term forecast for the DXY Index remains neutral. The weekly candle will be of particular importance as price grapples with not only breaking the triangle its consolidated in since November, but also losing the uptrend from the 2018 low.