DAX May Plummet on Auto Tariffs, Spanish Election not a Cause of Concern 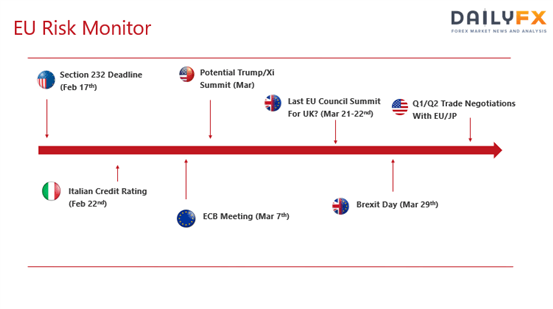 Section 232 deadline is set for Feb 17th, in which the Department of Commerce will present their findings on whether Eurozone autos present a threat to the United States national security. Headline risk will begin to rise over the potential threat that the US could enforce tariffs on Eurozone autos, consequently sparking a tit-for-tat with the EU likely to retaliate. Reports on Friday from German press noted that 3 options could be considered.

As such, this would likely pose the biggest threat to the auto heavy, DAX and more specifically, Daimler, BMW and Volkswagen. Today saw the IFO institute highlight that a tariff rate of 25% would reduce total car exports from Germany by 7.7%.

Next week will see the release of the January FOMC meeting minutes which will likely garner attention as investors look to assess views among the council regarding the central banks dovish pivot. Alongside this, eyes will be on commentary surrounding the Federal Reserves balance sheet, which continues to take place despite the change in stance.

Spanish Election Not a Cause of Concern for Now

In what had been widely touted, the Spanish PM called for a snap-election on April 28th. As it stands, markets have been somewhat calm, reflected in the bond market, with German/Spanish 10yr Bond spreads only marginally wider. Among the factors behind this are that populist threat is low, given that the far-right VOX party are polling around 10%. Alongside this, the Spanish economy has been one of the bright sparks in the gloomy Eurozone backdrop.