- The US Dollar is having an atypical month of October, usually one of its best months of the year. The recent move lower by the DXY Index could be the greenback recoupling with Fed rate expectations.

After the US midterm elections at the start of November, we produced a note detailing some of the major charts and themes to watch into the end of the year. Of note, one of our key themes to watch for was, "How Quickly Do Traders Spot Shifting Fed Narrative?" It seems that less than a month later, we have our answer.

Following speeches by Fed Vice Chair Richard Clarida last Tuesday, Fed Chair Jerome Powell last Wednesday, and the release of the November FOMC meeting minutes last Thursday, it is evident that traders have started to take notice of the chasm between the Federal Reserve's projected glide path for interest rates (as detailed by the dot plot in the September Summary of Economic Projections) and market pricing for rate hikes over the coming years.

On the surface level, some may say that Fed Chair Powell et al are backing down due to apparent public pressure from US President Donald Trump. But that would be a superficial assessment of the situation, ignoring the advance by the DXY Index in 2018 and the dramatic collapse of energy prices in recent weeks - both of which portend to weaker inflation in the future; there are already signs of disinflation in the data. If anything, this simply means that the Fed has become more data dependent, moving away from its preset policy course - a dovish shift, no matter how you paint it (but not one spurred by President Trump).

A deviation away from the prior preset policy course (one 25-bps rate hike per quarter) and a return to data dependency means that any gap between Fed expectations and market pricing should close (as markets are data dependent by default). As of the most recent update to the Fed's Summary of Economic Projections in September, the FOMC was looking at a 25-bps rate hike in December 2018, 75-bps of hikes in 2019, and one 25-bps hike in 2020. 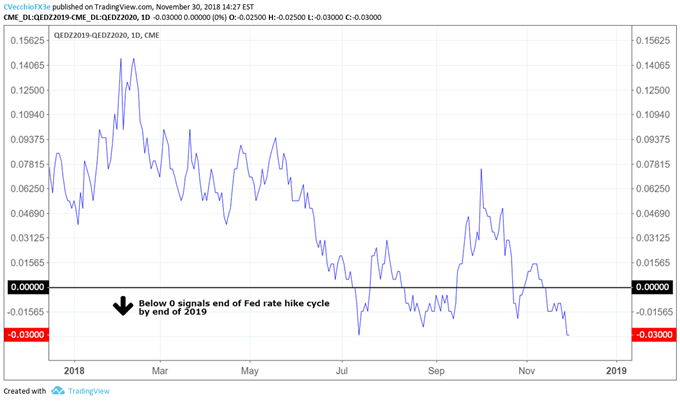 We can measure a rate cut being priced-in for 2020 by examining the difference in borrowing costs for commercial banks over a one-year time horizon in the future. The spread between the Eurodollar 2019 and 2020 contracts remains below zero, saying that market participants are currently expecting interest rates to be lower at the end of 2020 than they were at the end of 2019.

This problem of there being palpable dissonance between the Fed and market participants is not a new phenomenon. In fact, at the start of the Fed's hike cycle in 2015, we cast doubt on the US Dollar's ability to sustain a rally throughout the hike cycle due to this very reason: the Fed has had the tendency to promise action sooner than it has delivered, constantly setting up the US Dollar for disappointment as rate hikes materialized slower than anticipated. On the day that note was written, November 25, 2015, the DXY Index closed at 99.76; at the end of last week, over three-years later, now that the end of the Fed hike cycle is coming into view, the DXY Index closed at 97.20. There is still some time before the hike cycle ends, but it's almost time to declare our multi-year forecast correct.

To this end, the situation the US Dollar finds itself in following last week's speeches and minutes release from the Fed feels like another situation where, even as the FOMC prepares to raise rates again, it will downgrade its future rate path and keep US Dollar rallies constrained as a result. Or, more of the same theme of the Fed hike cycle since it began at the end of 2015. 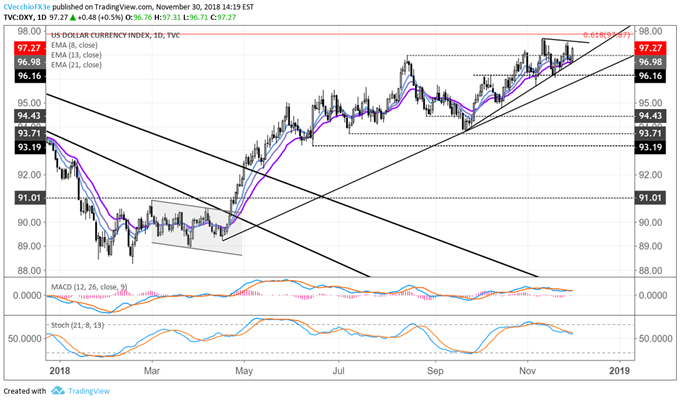 The sideways price action seen this week (two days of gains followed by three days of gains) has done little to alter the DXY Index's technical picture. Price remains above its daily 8-, 13-, and 21-EMA envelope, but both daily MACD and Slow Stochastics are not pointing higher. The 'melt up' situation towards the yearly high at 97.69 remains, although indicators are have diverged due to the lack of conviction in price action, leaving open the possibility of a turn lower. A loss of upside momentum would be noteworthy below 96.04, the mid-November swing low.