- Since the last week of June, July Bank of Canada rate hike odds have increased from 52% to 81% today.

- Similarly, since the end of May, August Bank of England rate hike odds have increased from 29% to 82%.

The British Pound has stabilized in recent days as signs have started to increasingly point to a rate rise coming at the next Bank of England policy meeting. The turnaround by the Sterling is tied directly to the changing tides of economic data momentum.

Since the end of May, while the Citi Economic Surprise Index for the UK has increased from -67.3 to -5.1 today, August BOE rate hike odds have increased from 29% to 82%.

BOE policymakers have been paying attention to the shift in economic data momentum as well. Earlier on Thursday, Governor Mark Carney said that recent data had given him "greater confidence" that the soft Q1'18 growth figures "was largely due to the weather."

Governor Carney summarized, "Overall, recent domestic data suggest the economy is evolving largely in line with the May Inflation Report projections, which see demand growing at rates slightly above those of supply and domestic cost pressures building."

The steady build in rate hike expectations in recent weeks has helped the British Pound stabilize, but not much more. Market participants seem to be of the mindset that an August rate hike by the BOE will be of the one-and-done variety, with overnight index swaps pricing in less than a 20% chance of a second rate hike before the end of 2018. 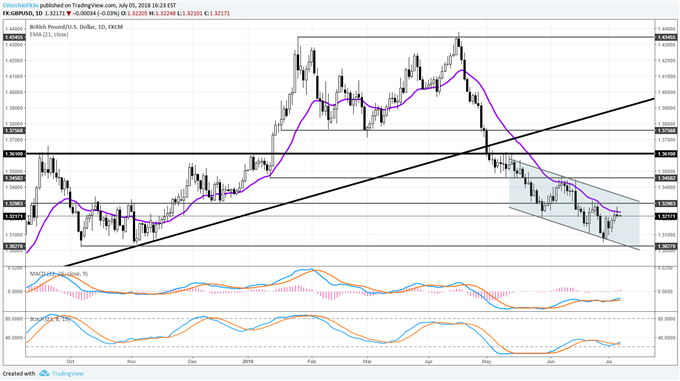 Rising BOE rate hike odds, particularly since mid-June, have coincided with Fed rate hike odds rising as well, leaving GBP/USD in a situation where price action has been grinding sideways without much directional resolution.

For now, the descending channel since mid-May remains in place, although momentum has started to shift to the topside with both daily MACD and Slow Stochastics trending higher (albeit both are still in bearish territory). The key level to watch in the near-term is the daily 21-EMA, which has capped price on a closing basis every session since April 18.

The Canadian Dollar has been seemingly stuck between a rock and a hard place in 2018: as much as the Bank of Canada has publicly desired to raise rates, it has been mostly sidelined thanks to ongoing uncertainty surrounding the country's trade relationship with the United States.

Despite the fact that the Canadian labor market has lost nearly -10K jobs on average per month in 2018, a sustained push higher by energy prices has helped keep inflation pressures elevated in the BOC's target range.

And so, with trade tensions remaining (but not materially escalating), the BOC is poised to follow the Fed's cue and tighten policy further when they meet next week. Overnight index swaps are pricing in an 81% chance of a 25-bps rate hike next week, up from 52% just last week.

The scope for further Canadian Dollar gains beyond the upcoming policy meeting is greater than what the British Pound has going into the BOE's next rate decision. The main reason is that rates markets are pricing in a 67% chance of another BOC rate hike by the end of 2018; so, whereas forward guidance is a non-factor for the British Pound, it is front and center for the Canadian Dollar. 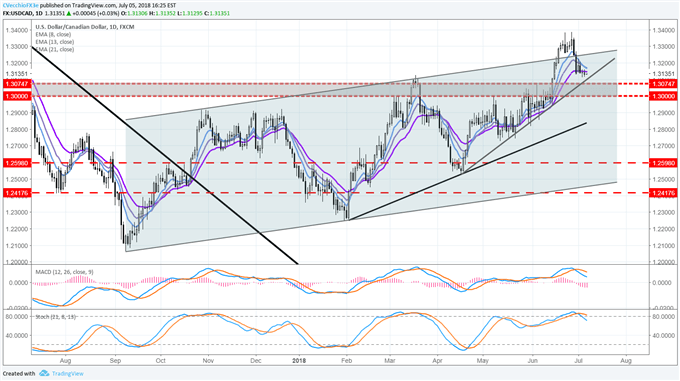 USD/CAD has been trading in an ascending channel since September 2017, and the surge in May and the first three weeks of June carried the pair through channel resistance briefly. But the continued push higher by oil prices coupled with the sharp rebound in July BOC rate hike odds has been a significant enough set of factors to set up a 'false breakout' scenario.

As such, heading into the July BOC rate decision next week, the uptrend since the mid-April lows is very much in question for USD/CAD. Confirmation that policy officials are keeping the door open for additional policy action this year - in aggregate, three 25-bps hikes in 2018 by the BOC - could be all that the Canadian Dollar needs to stabilize further.