- The BOE’s decision to keep rates on hold was unsurprising, but the 6-3 vote (from 7-2 last meeting) was.

- With Chief Economist Haldane dissenting for a rate hike, odds of a 25-bps tightening move in August have increased from 48% yesterday to 68% today, per overnight index swaps.

The British Pound has been in near freefall since the middle of April, thanks in part to the machination of Bank of England Governor Mark Carney. After all, it was two months ago when he threw water on the idea that the BOE would hike rates in May, and indeed, as time wore out, no rate hike transpired.

As evidenced by today, the BOE and Governor Mark Carney are still as significant factors for the British Pound as they were back in April when GBP-crosses topped. But if the past two months were marked by dovish influence, the June rate decision may have yielded a more hawkish outcome than anticipated; the BOE is the catalyst for the British Pound’s reversal, just as it was the author of its demise.

Although the BOE voted to keep its main overnight rate on hold at 0.50%, the Monetary Policy Committee’s vote breakdown indicated a more hawkish tilt than in times past. Coming in at 6-3 from last meeting’s 7-2 vote, Chief Economist Andy Haldane joined the ranks of the dissenters in calling for a 25-bps rate hike.

In turn, with arguably the second most important policymaker at the BOE (besides the Governor himself) joining the hawks, odds for a rate hike in August – when the next Quarterly Inflation Report is released – have jumped from 48% at the close yesterday to 68% today, per overnight index swaps. In turn, the British Pound has emerged as the top performing currency on the session. 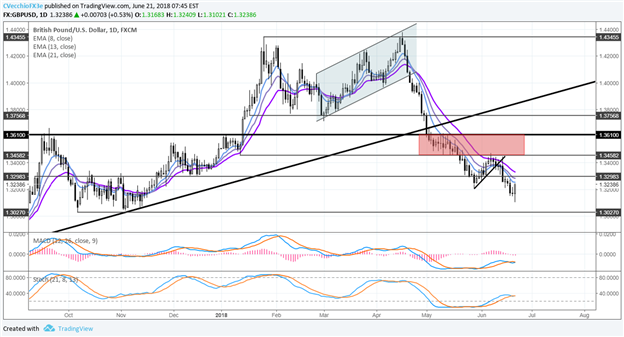 The sharp rebound in rate hike odds over the past 24-hours has produced a number of significant candlestick reversal patterns across the GBP-spectrum: GBP/USD is working on a bullish daily key reversal; GBP/JPY a bullish piercing candle (missing a bullish outside engulfing bar by 1-pip); and EUR/GBP a bearish piercing candle (missing a bearish outside engulfing bar by 2-pips). Similarly bullish price action has likewise emerged in GBP/AUD, GBP/CAD, and GBP/NZD.

Moving forward, for the British Pound to produce any sort of meaningful follow-through to today’s promising price action, a number of developments will need to break its way over the coming days and weeks. Primarily, economic data momentum needs to continue to improve to substantiate the BOE’s belief that the Q1’18 slowdown was “temporary.” Additionally, Brexit drama surrounding UK Prime Minister Theresa May’s cabinet needs to be kept in the background (facing down a pro-EU rebellion in Parliament was a start).