- Rise in US Treasury yields and bump in rate hike expectations coincides with US Dollar (via DXY Index) breaking downtrend from March, April, November, and December 2017 highs.

The US Dollar has continued its tear this week, on pace for its seventh daily gain over the past eight days. The catalysts have been twofold: a steady push higher in rate hike expectations by the Federal Reserve in 2018; and a rise in US Treasury yields across the curve.

To the first point, Fed funds futures are now pricing in 25-bps rate hikes in June (93% implied probability), September (77%), and December (51%). While a December rate hike is the least certain of the three, ongoing acceleration in inflation figures to keep the Fed on a path of gradually raising rates at meeting that coincide with the release of new Summary of Economic Projections.

But this is not to say that growth expectations are increasing meaningfully. In fact, the US Treasury yield curve has flattened significantly over the past year, as seen in Table 2 below. 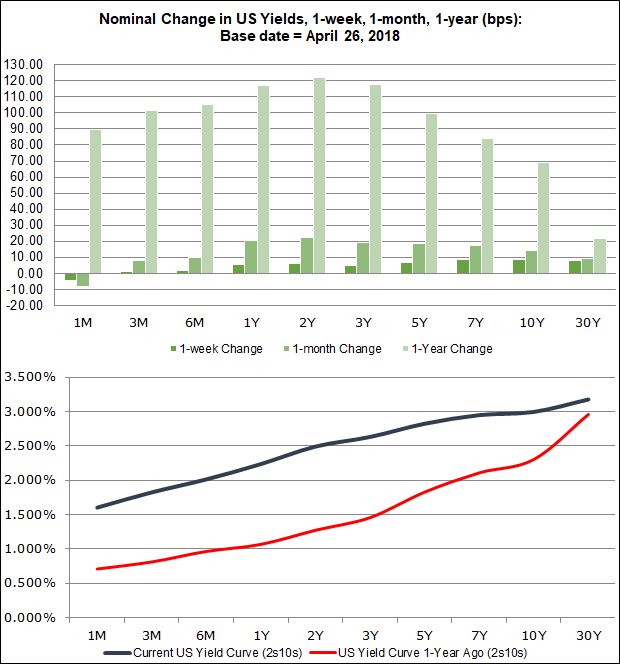 Nevertheless, the move higher in both yields and rate expectations have proven a potent catalyst for the US Dollar, which may have indeed just bottomed out in the near-term. An inverse head and shoulders pattern that took shape in March and early-April broke out to the topside last week, and the DXY Index has finally moved back above 91.01, the 2017 low and clear resistance during attempts higher in mid-January and early-March. 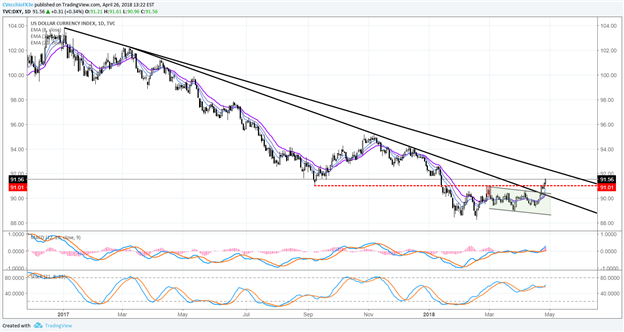 Furthermore, the rally by the DXY Index, in overtaking 91.01, coincides with a break of the downtrend from the March, April, November, and December 2017 highs. While there is still another key trendline to break – off of the January and March 2017 highs – signs have clearly emerged that the US Dollar is no longer the whipping boy of FX markets.