- The US Dollar has started to follow US yields once more after disconnecting for the early part of 2018.

The start of the new month and quarter may bring new tidings for the US Dollar. After muddling around for most of March, proving unmoved by the Federal Reserve’s rate decision to raise rates at their March policy meeting, the greenback has entered April on somewhat uncertain ground: even though the Fed has signaled that at least two more rate hikes are coming this year, does the US Dollar even care?

Currently, rates markets are pricing in 25-bps hikes in June and November, although a look at history would suggest that policy changes would only occur at meetings in which a new Summary of Economic Projections (SEP) are produced. This means that the third 2018 hike would come in either September or December. The odds of a second hike this year for June are at 80%, while the odds for a third hike this year in September and December are at 57%and 73%, respectively.

Even as the US Dollar (via the DXY Index) has been largely disconnected from rate hike expectations movements through the first quarter of 2018, we won’t dismiss their ability to drive price action moving forward. There is evidence that the relationship between the US Dollar and US Treasury yields is starting to tighten up again, with the greenback following the US Treasury 10-year yield more so than the S&P 500 during the first days of April.

With the DXY Index rallying back to its highest level since March 1 – the day when US President Trump began beating the trade war drums aggressively in public – attention is starting to focus on the prospect for a US Dollar bottom. For the time being, the news wire is more likely to be a potent driver of price action rather than the repricing of Fed rate hike expectations, although it would stand to reason that the receding threat of a trade war with China would reduce uncertainty around the US economy and thereby allow the Fed to tighten more aggressively in the second half of 2018. 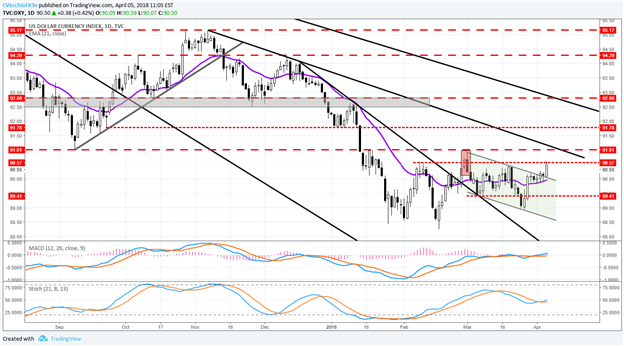 While price is no longer trading within the downtrend from the December 2017 and January 2018 swing highs, and has broken out of the downtrend since March 1, price still remains below 91.01, the 2017 low set on September 8 (which subsequently marked a morning doji star candle cluster failure in mid-January as well as the March 1 key reversal).

Similarly, given that trading is not only a function of price but also of time, the DXY Index would need to contend with the descending trendline from the November and December 2017 highs once it reached 91.01 before any legitimate low could be called.