- Fed rate hike odds for March 2018 have climbed from 50% to 89% since November, but the DXY Index has continued to fall.

- No rate move by the BOE is priced in before August, and FX markets don't seem to care one way or the other.

Rate hike odds for the Federal Reserve's January meeting remain immaterial. Given that the Fed only hikes at meetings in which they produce a new Summary of Economic Projections (SEP) and the Fed Chair holds a press conference, eyes are on the next meeting that sees these events come to pass in March, where rate hike odds stand at 89%. 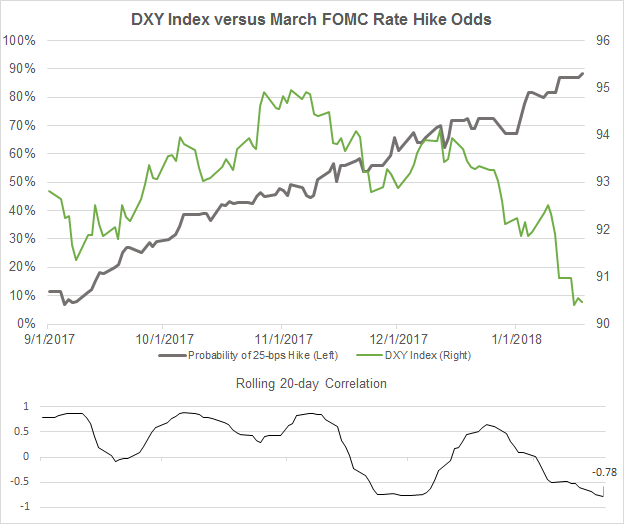 Yet the US Dollar has ignored the climb in hike odds. Perception of US fiscal policy - not speculation around US monetary policy - continues to guide the US Dollar right now, with the 20-day correlation between March 2018 hike odds and the DXY Index at -0.78. The specter of a US federal government shutdown after Friday, January 19 is the center of gravity for the US Dollar in the near-term.

The British Pound has been on a tear to start 2018, climbing +2.7% versus the US Dollar through the first two-plus weeks of the year (only NZD/USD is performing better, up by +2.9%). But the British Pound's strength has not been the result of traditional influences making their presence felt: speculation around the next BOE rate hike has had little to no impact on the British Pound. 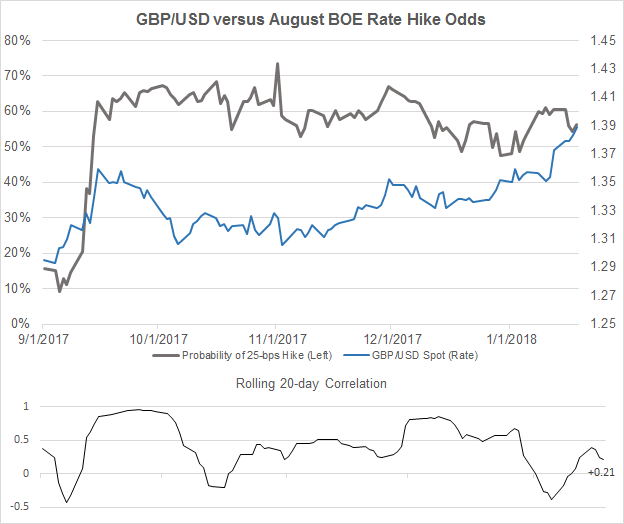 In effect, the Bank of England is in a similar boat as the Federal Reserve: perceptions over near-term policy changes are holding no influence over FX markets. Look no further than the reaction to the December inflation data released on Tuesday this week; Tuesday produced the smallest daily trading range of the week thus far.

The BOE made clear the November hike wasn't the start of a new hiking cycle, and markets remain unconvinced another hike will come before August (56% implied probability). For now, even though negotiations are in hiatus until March, developments in domestic UK politics surrounding Brexit remain the most potent source of risk to the British Pound.

Read more: It’s Still Too Early to Call a Bottom in the US Dollar