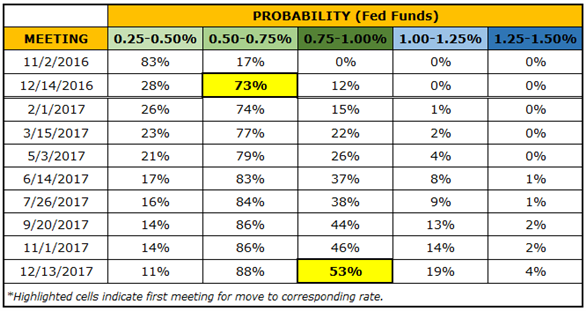 - US Dollar (via DXY Index) has been tracking Fed rate hike odds for December more closely.

- Markets currently pricing in one rate hike in 2017, by December.

We’re a week away from the Federal Reserve’s November policy meeting, but for all intents and purposes, it’s nothing more than a placeholder. This is for two reasons. First, with US Presidential elections less than a week later (Fed meets on November 2; US elections on November 8), there’s little reason to think that policymakers would want to unmoor volatility with a surprise shift in monetary policy. Second, the Fed, like so many other central banks, rarely acts without ‘justification’ – that is, new economic projections in hand to justify the change in policy; the next summary of economic projections (SEPs) will be released in December.

Markets have taken to this mindset – dismissive of a November surprise – convincingly: there’s only a 17% chance of a rate hike next week.

The projected path of future rates – the glide path – could be a significant factor in the market’s attempt to predict what the Fed will do over the next few weeks and beyond in 2017. As it stands right now, markets (per the Fed funds futures contract) are pricing in a rate hike in December 2016, then barely one more in 2017. Assuming that the Fed acts in line with the market, the Fed’s overnight cash rate would rise to 1.00% by the end of next year.

Chart 1: DXY Index vs Probability of a December Rate Hike 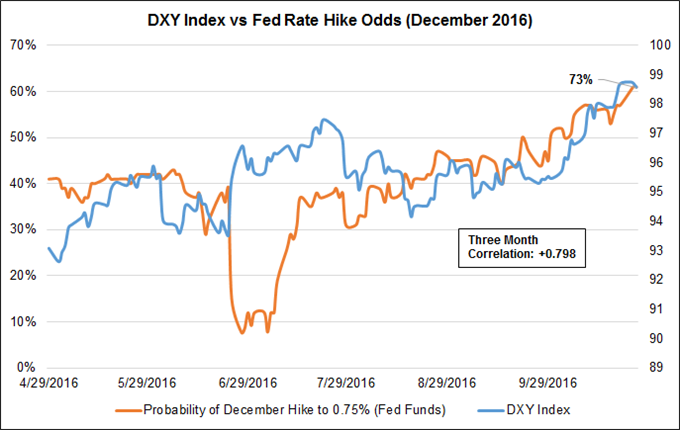 For the US Dollar (via DXY Index), nothing really matters more than whether or not the Fed raises rates. There is a significant +0.798 correlation between the DXY Index and the implied probability of a Fed rate hike (per the Fed funds futures contract) over the past three-months. A short-term view exhibits how the relationship between rate expectations and the greenback has evolved: on September 28, the 20-day correlation was +0.249; on October 26, it was +0.857. It’s not a far leap to suggest that the backbone of recent US Dollar has been rising rate expectations; and US Dollar strength between now and December 14 hinges on rate expectations remaining elevated.