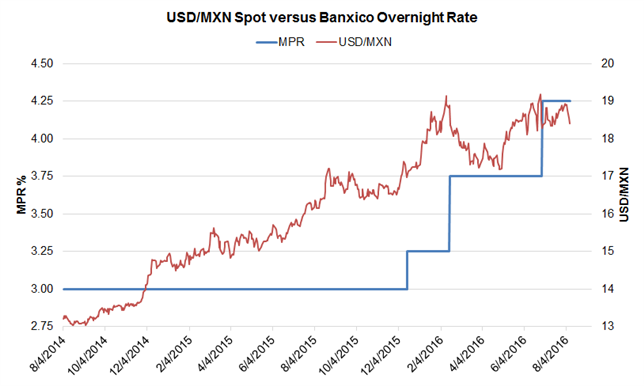 - Banxico broadly expected to keep its benchmark rate unchanged at 4.25%, according to Bloomberg News.

Banxico, the Mexican central bank, will convene later today for its August policy meeting and rate decision. According to a Bloomberg News survey, market participants broadly expect that the central bank will maintain the overnight rate unchanged at 4.25%, especially after policy makers have recently downplayed the risks of pass-through from the currency to inflation.

Although Banxico has become increasingly more unpredictable – it has already surprised the market twice in 2016 by unexpectedly raising borrowing costs by 50-bps on each occasion – it is unlikely to see a repeat on Thursday as the current economic backdrop may not yet warrant tighter monetary policy.

Banxico first surprised the market on February 17, 2016 in an unscheduled policy meeting. In the meeting, policymakers opted to raise the benchmark rate by 50-bps to 3.75% in an effort to head off inflation and to prevent CPI expectations from becoming unanchored. At the time, heightened market volatility in response to fears over a hard landing in China and the Chinese Yuan devaluation elicited a massive sell-off in commodities and EM currencies, which ultimately pushed USD/MXN above 19.000, its weakest level in history, from approximately 17.260 at the beginning of 2016.

The second time Banxico caught the market off-guard this year was at its June 30 policy meeting, when the board of directors voted, by unanimous decision, to hike the overnight rate by 50-bps to 4.25%. The move was, again, precautionary in nature and was aimed at containing inflation expectations. In the run-up to the June policy meeting, the Peso had come under a lot of pressure and has, once again, weakened past the 19.000 psychological level against the US Dollar as a result of ongoing market turmoil and flight to safety due to the Brexit referendum. As the global backdrop had deteriorated, risks to the inflation outlook had increased; therefore, Banxico preferred to get ahead of the curve and raised borrowing costs by another 50-bps.

This time around, USD/MXN has managed to remain below the key 19.000 level, thereby alleviating near-term concerns among policymakers about the weaker exchange rate passing through to inflation. It is worth noting that if history is any indication, Banxico has only surprised markets when USD/MXN has broken above 19.

Sluggish growth is now the prime concern, after Q2’16 Mexican GDP contracted on a quarterly basis, posting its worst perfomance since Q2’13. While tighter rates may be a reality in the future – especially if the Fed hikes, a stronger USD/MXN would push up Mexican inflation pressures once again – the weak growth backdrop, exacerbated by sustained low oil prices, means a Mexican recession may not be out of the question. In turn, Banxico seems to be facing an increasingly difficult policy environment, with stagflation-like conditions (low growth & high inflation) starting to creep in.