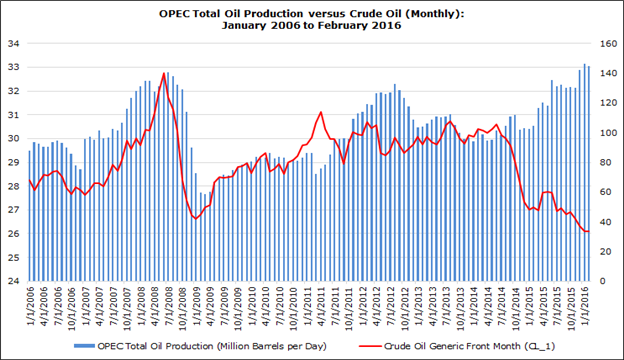 - Technical bottom may be forming in Crude Oil despite supply concerns.

- Market has started to look past overproduction data.

The oil price slide that began in July 2014 has just celebrated its 20-month birthday. One of the main reasons for concern back then, which has come to fruition and remains the main concern today, is the oversupply of oil. Three of the top five energy producers globally are OPEC members (#1 Saudi Arabia, #4 Iraq, #5 Iran), illustrating the simple point that OPEC still holds a major influence in the oil market, even if it can’t find common ground at present time.

Amidst a slowing global economy, demand for commodities has dropped significantly. At the center of it all seems to be China. China is currently the second largest consumer of oil in the world (per the International Energy Agency), and it is experiencing some of its slowest growth rates over the past decade - which has inevitably fed into the decline in energy prices.

Considering how globalized markets have become in contemporary times, when a giant like China slows, so too does the rest of the world; there is no “decoupling” like policymakers hope for. Yet oil producers haven’t reacted in turn: the IEA estimates that demand is currently outstripped by supply by around 2 million barrels per day. The motivating factor may be that, despite lower demand, the world’s largest oil producers – most of whom are OPEC members – are fighting for market share as prices collapse.

As a result, oil production has stayed elevated despite the plunge in Crude Oil prices over the past 20-months (chart 1 below).

The oil supply glut has been building for a while without much reprieve and the growth concerns haven’t helped. Countries with a competitive advantage are pumping oil at record levels in an aggressive maneuver to gain market share, and there may be reason to think that there is geopolitical maneuvering at work too.

In light of the nuclear agreement between the P5+1 and Iran, it’s very likely that Saudi Arabia has recognized that Iran will be an economic heavyweight in the region once more now that the sanctions have been lifted. To prevent them from being able to sell oil at a high price and reinvigorate the Iranian economy very quickly, Saudi Arabia has been coyly keeping production high to prevent a resurgent Iran, whose newly-found oil money would otherwise fund anti-Saudi efforts across the Middle East. The geopolitical complexities couldn’t be more profound.

On the surface, it seems that oil prices are not going anywhere anytime soon, and the back-and-forth between concerns over supply and demand should persist into the foreseeable future. Sustained higher volatility should be expected as announcements, bad or good, of output levels by OPEC and the major producers are likely to impact fragile market sentiment. Despite OPEC’s influence, they must realize that they are facing a more saturated market for oil and the market recognizes this. OPEC was once by far the biggest fish in the pool. Although they still are the biggest fish now, the margin is not as wide as it used to be. This has caused a change in the dynamics of energy markets – a permanent structural shift has developed.

Energy Prices May Stay Lower, but that Doesn’t Mean They Can’t Rally

As bad as things may seem today, markets don’t care either way; they’re busy thinking about tomorrow. Markets are always discounting the future. Keeping this in mind, the reaction in Crude Oil last week around the DOE US Crude Oil Inventory figures for the week ended February 26 was quite surprising. Crude Oil inventories jumped by 10.37 million barrels, nearly three times the expectation of 3.4 million barrels. Instinctually, one would think that the excessive, unexpected build in supply would provoke another downdraft in energy prices. Yet the market didn’t react that way (chart 2 below). 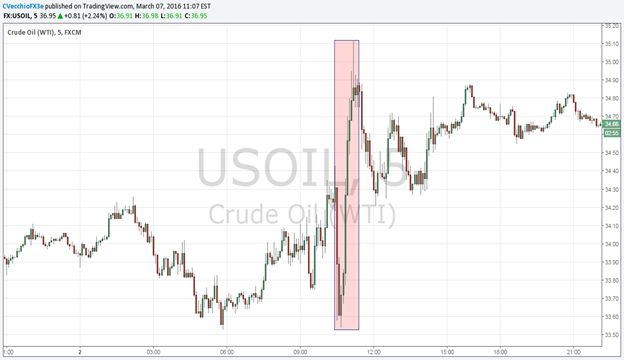 Short-term supply/demand imbalance concerns were seemingly wiped away on Wednesday, March 2, even though there was tangible evidence of the oversupply continuing. Yet when thinking about the forward-looking feature of the market, this may have been a capitulation sign: investors are no longer shocked by the buildup. Instead, they see these large supply gains as a sign that it is now inevitable that OPEC and non-OPEC (Russia, mainly) countries will work to curb production.

Since the March 2 capitulation event, there has been sufficient evidence of a short-term bottom forming in Crude Oil. As we first pointed out in the March 1 report, “New Month, Old Concerns: ECB Easing, Fed Hiking, Brexit, and Oil,” and then again in the March 2 report, “Don’t Look Now - Risk Markets are Trying to Stage a Comeback,” the likelihood of a short-term bottom in Crude Oil has been building. Here’s the chart from March 1 (chart 3 below). 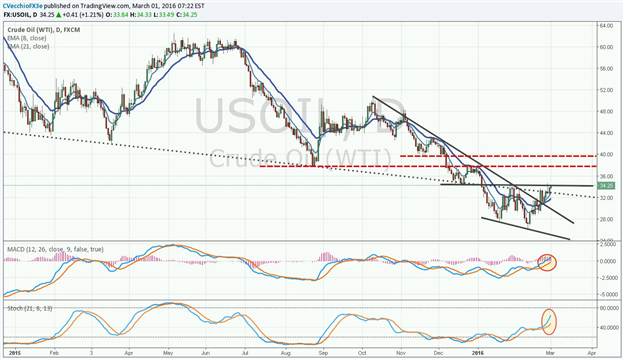 The recent break above $35 per barrel hints of a turn – here’s the chart from today (chart 4 below). 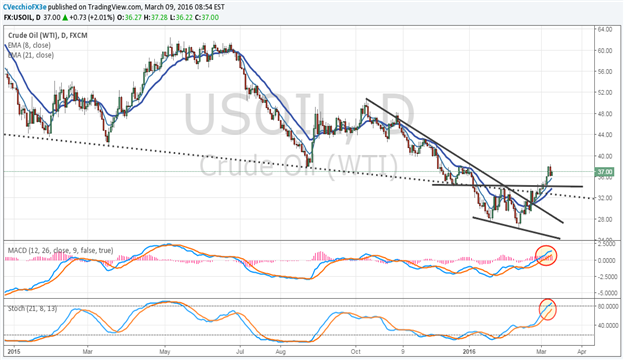 Coincidence or not, the potential bottoming pattern in Crude Oil matches up with the theoretical ceiling for energy prices: right below $50 per barrel, the estimated conservative economic breakeven cost for the average US shale driller. The potential expanding wedge at the bottom could see a rally into $45 per barrel over the next three months given the measured move. If energy prices were to climb through these levels, then previously slowed operations could start pumping again. The threat of new supply to the market being added to the market should prove to be a fairly significant psychological barrier.

Structurally, oil may be inclined to stay lower than they did at their peak two or even eight years ago, but they’ll still be able to rally. If energy prices and commodities in general are bottoming (in particular Gold’s bullish falling wedge that’s been in play since February 2), then the scope for a greater turnaround in risk sentiment exists. The commodity currencies in particular should stand to benefit, in particular, the Canadian Dollar. 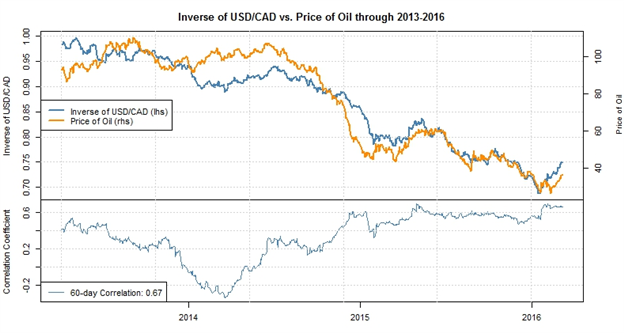 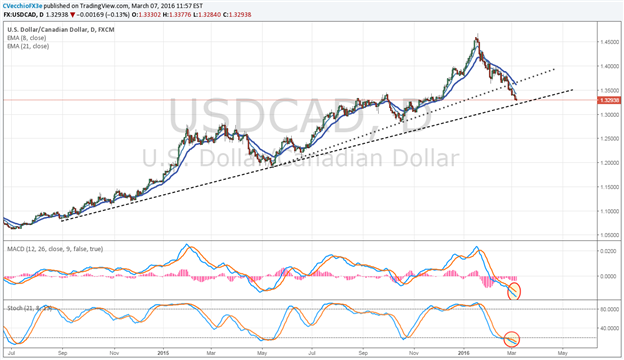 True, the relationship between the Loonie and oil can change, distorting the recently tight correlations at hand. For now though, traders looking for a bottom in Crude Oil may also want to see if USD/CAD trendline support cracks and vice-versa. Considering that we’ve seen the tendency for USD/CAD to lead the broader USDOLLAR Index, and that there is a FOMC meeting around the corner on March 16, traders may want to pay extra attention in the interim period.

While the Bank of Canada meeting today is getting a lot of attention, it should only prove to be a passing distraction for the Canadian Dollar – Crude Oil price swings and the upcoming March 22 budget announcement are far more important beyond the immediate short-term.