- December caps off strongest quarter of the year for the US Dollar.

- Euro, Japanese Yen have tended to underperform in December during QE era.

- December marks the fourth of four consecutive months of gains for the S&P 500.

For December, we continue to focus on the period of 2009 to 2014; despite the Federal Reserve’s best intentions, they have yet to raise rates, even though it is looking increasingly likely that they will in just a few weeks at their December 16 FOMC meeting. The small sample size of six years is not ideal, and we recognize that there is increased statistical stability with using longer time periods. However, because of the specific uniqueness of the past six years relative to any other time period in market history - the era of quantitative easing - we've elected to attempt to increase the stability of the estimates with the shorter time period. It’s worth noting that once the Fed begins to normalize its rates policy, we will begin to look at longer-term seasonality studies as opposed to just reviewing the QE era. 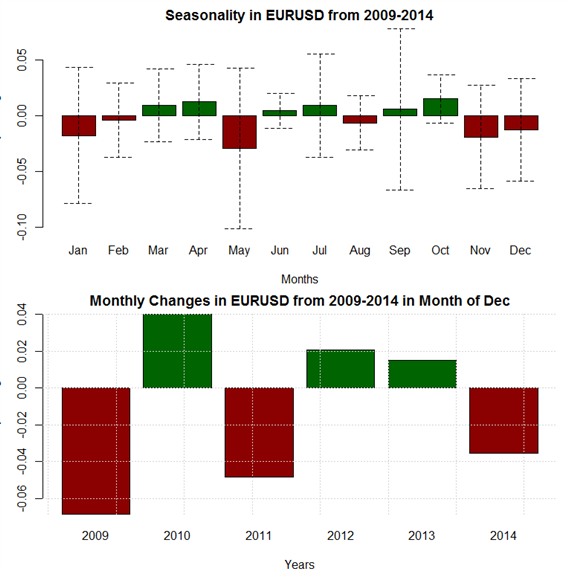 December has been a weak month historically for the Euro versus the US Dollar, what’s been the second in a stretch of four months of weakness during the QE era. However, despite posting an average loss of -127.2-pips during December, the frequency of gains and losses is equal over the past six years. The turn of the year hasn’t been kind to EUR/USD, and before we see the calendar turn to 2016, the Fed will hike rates on December 16 could upend any seasonal tendencies. 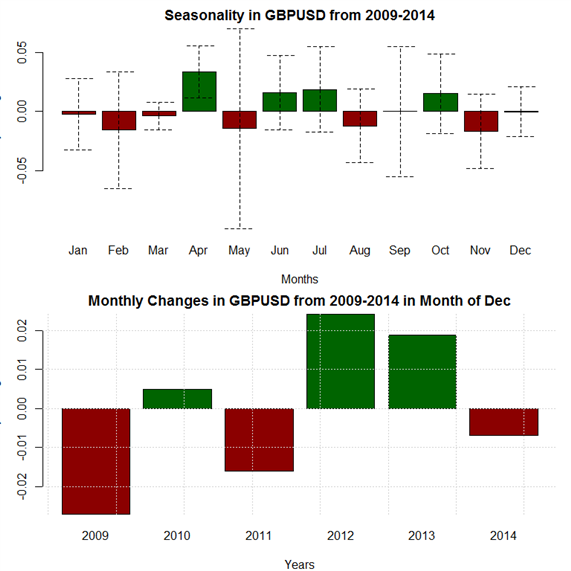 Unlike for EUR/USD, which GBP/USD has loosely tracked month-to-month from a seasonality perspective, December has not proven to be an overtly bearish month for GBP/USD. Like EUR/USD, GBP/USD has seen equal occurrences of gains and losses since 2009, but its average December performance over this timeframe has been -3-pips relative to EUR/USD -127.2-bps. Given the overhang of significant event risk in December, and in light of the neutral seasonal tendency, we’d expect rangebound conditions to proliferate, though with heightened volatility. 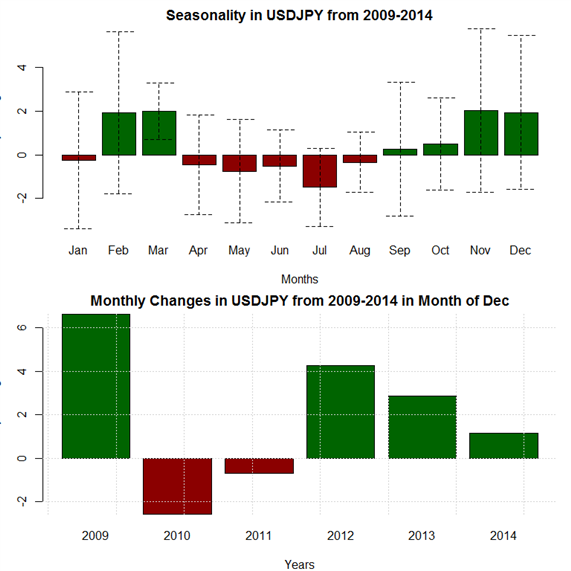 December has been a top three month of the year for USD/JPY during the QE era, and it remains in the midst of a four-month long bull run (six out of seven through March). However, momentum may be waning: the gain in each of the past two years have been to a lesser degree than the year preceding it. Putting this in context of our concerns that a Fed rate hike could actually provoke a short-term pullback in the USD-complex broadly, we eye USD/JPY’s outright bullish December seasonal tendency with caution. 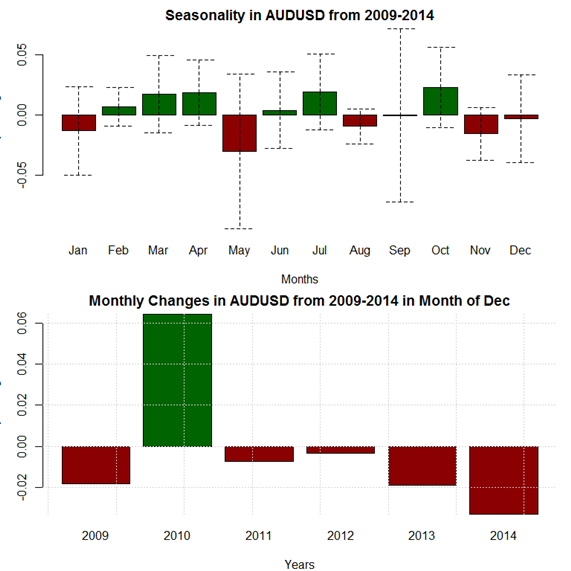 Given AUD/USD’s resiliency last month – the pair gained +81-pips during what was historically the second-worst month of the year during the QE era – we must acknowledge that there is a heightened chance that AUD/USD outperforms what is otherwise a neutral seasonality forecast for December. Even though the pair has lost ground in five of the past six years, losses have only been modest, offset by an outsized gain in 2010; the pair has averaged -28-pips. 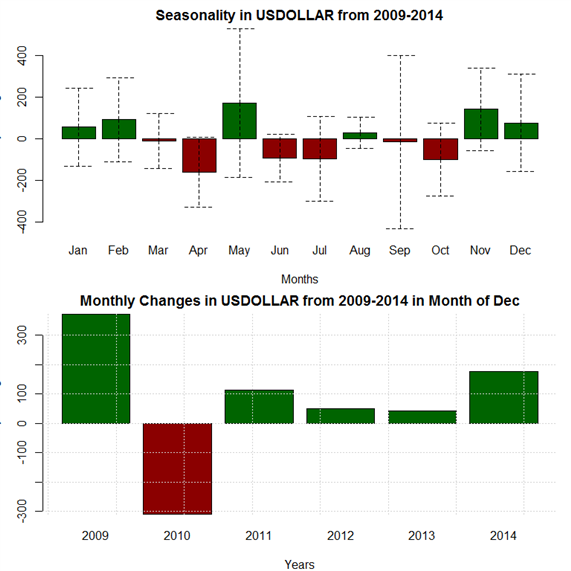 December has been the fourth-best month of the year, which in and of itself isn’t remarkable, but December has been rather consistent: gains have materialized in five of the past six years. While the USDOLLAR Index is in the midst of its most bullish stretch of the year, concerns about the viability of further gains have started to grow, mainly rooted in the belief that the Fed will only move forward with a ‘dovish rate hike.’ Accordingly, we’re approaching what should be an otherwise outright bullish seasonality forecast with measured reservation. 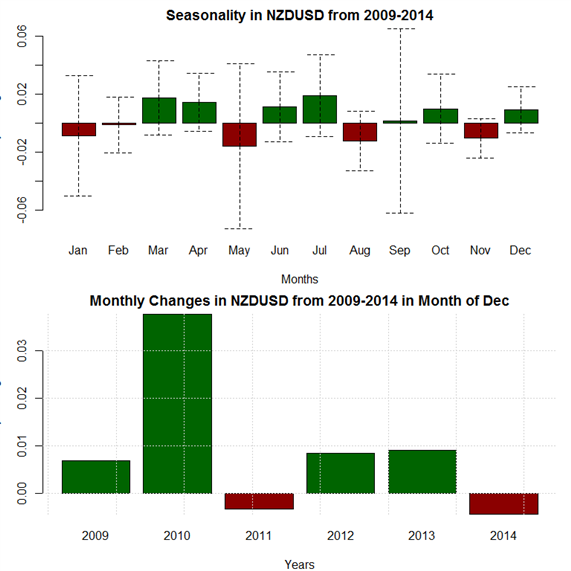 The seasonal forecast for NZDUSD in November is bullish. Last year produced only the second month of losses during the QE era, with the preceding two years producing gains. Yet December 2014, much like December 2011, produced only mild losses in the pair. It seems that the seasonality trend is asymmetrical: gains are more common than losses in December, and the average December gain is larger than the average December loss. Given the overhang of the Fed’s mid-December rate decision and its implications for the US Dollar, a bullish seasonal forecast seems appropriate, especially later in the month. 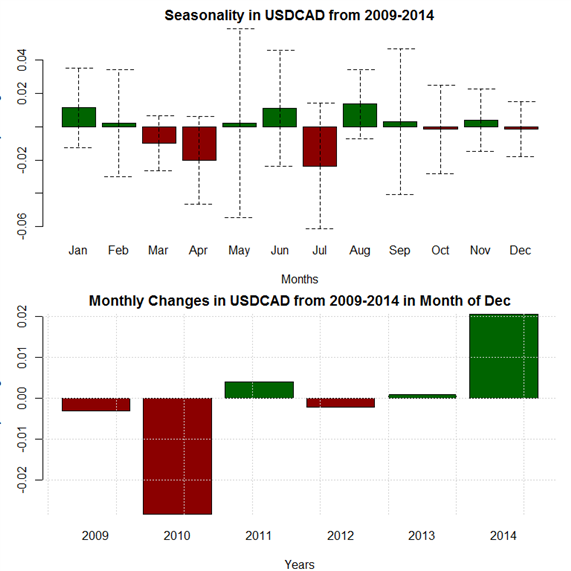 December has been steady in recent years, with gains and losses split evenly. The two largest moves – a sizeable loss in 2010 and a sizeable gain in 2014 – cancel one another out, leaving a rather benign December seasonality forecast. December has not only produced a middling performance by USD/CAD, but it has also been accompanied by one of the year’s smaller ranges. Sideways price action, per the seasonality forecast, seems like a reasonable expectation for USD/CAD this December; otherwise, the lack of volatility historically suggests that trend continuation is possible. 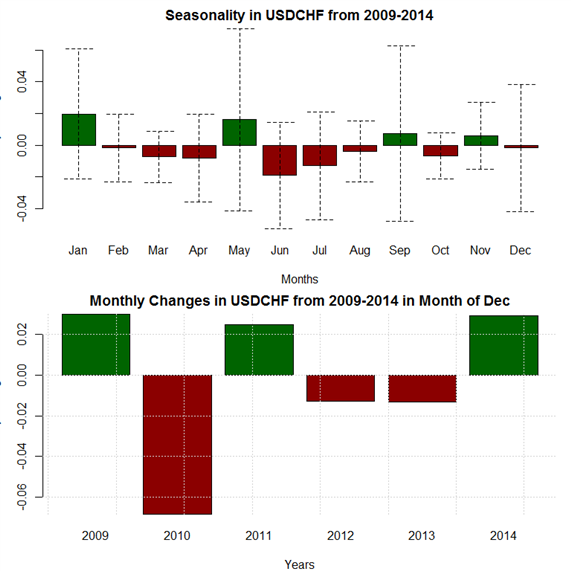 Seasonality favors a neutral USD/CHF in December. Despite the largest move during the QE era being a loss in 2010, modest gains in 2009, 2011, and 2014 have otherwise neutralized the previously bearish seasonal tendency. What we can discern, however, is that December is usually an active month for USD/CHF, having produced the second largest range during the second half of the year during the QE era. This year is different, however: for the first time since 2010, the EUR/CHF floor isn’t in place in December. 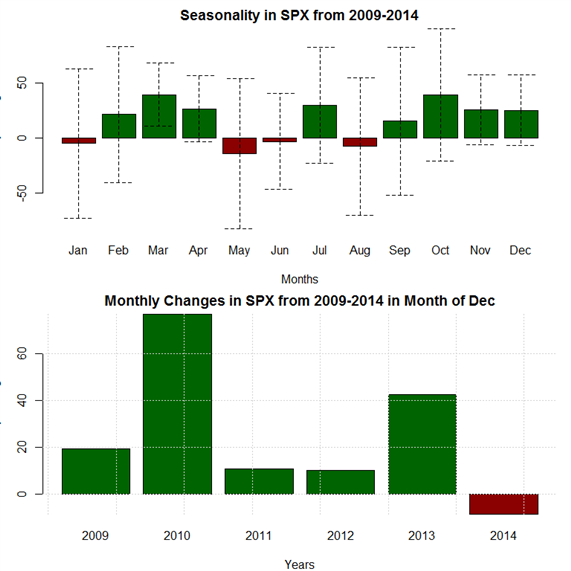 It seems the year-end ‘Santa Claus’ rally is still very much in the cards. Q4 has been the best quarter of the year for US equities during the QE era, and December has produced gains in five of the last six years. However, last year produced the only loss, and while one data point is too insignificant to discern any meaningful information from, it’s worth benchmarking December 2014 as the first year since the global financial crisis without the Fed expanding its QE program. Another weak performance in an otherwise bullish month would be troublesome for the S&P 500 moving forward. 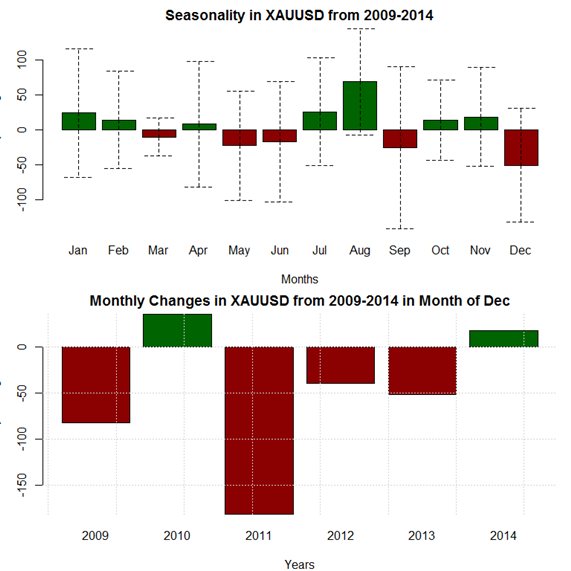 December is the worst month of the year for Gold. Losses have come in four of the past five six years, even though last year’s performance bucked the trend. Gold disappointed its seasonal tendency in November, setting up for a potential weaker year-end. However, it’s worth noting that in recent months, precious metals have tracked short-term yields lower; the ‘hunt for yield’ dictates that assets without some intrinsic value (a dividend, coupon payment, etc) are likely to lose out; so, the rally in short-term German bund yields, and thus, the Euro, have proven supportive to Gold. This is a relationship worth watching into Q1’16.